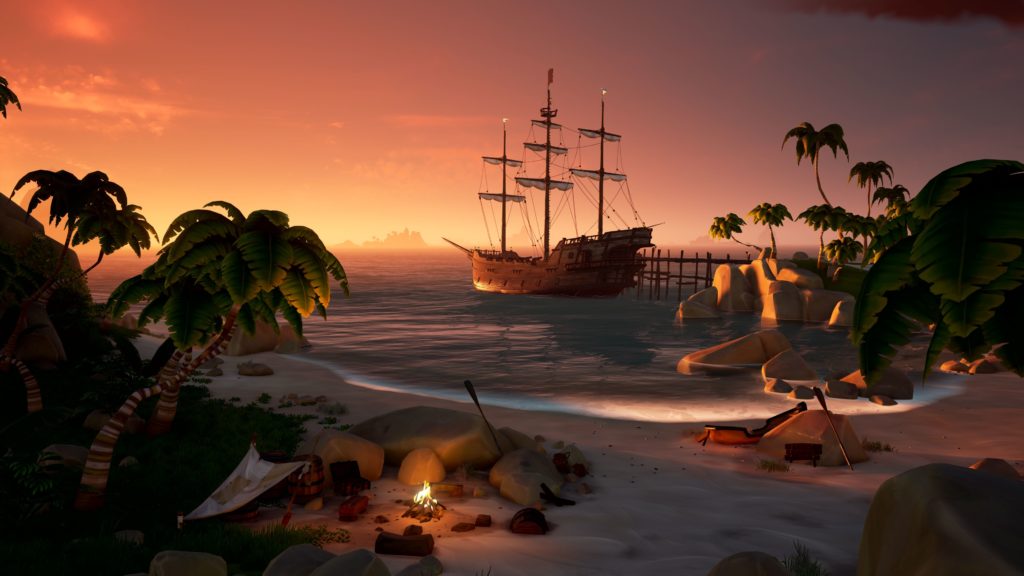 How to do the basics in Sea of Thieves: everything you need to know for your first voyage

Sea of Thieves has a bit of a sharp learning curve, because it doesn’t have a tutorial, as such. Rather than booting up the game and relying on the charity of strangers or having to look through the Sea of Thieves forums, we’ve collected all the basic info here in one place. This should equip you well for your first voyage. The rest is up to your derring do, matey! (Also any other guides we write.)

Ship types in Sea of Thieves: Sloops vs. Galleons

Each time you fire up Sea of Thieves you’ll start a new game, and have to choose what kind of adventure you want to go on. Sloops are smaller, and are the best option for when you’re either by yourself or in a pair, and are just out to do some quick, low-risk plundering. Sloops only have one mast and sail and only a couple of guns, but they’re more manoeuvrable and don’t take as much crewing – plus they make a smaller target. A Sloop is less threatening than a Galleon, and is less likely to have a big haul of treasure on board to steal. Galleons need a minimum of three players to crew them effectively, as they have three masts and the player at the helm can’t easily see what’s in front of them and they have three sails to deal with, but you can just about crew one alone in emergencies and feel really cool about it.

Galleons also have their map below decks, so it’s better to have someone else run down and check, and a third level below the waterline so maintaining hull integrity in a fight is harder on Galleons. They are, however, bigger, meaner, and faster, with four guns on either side and more room for piratey booty. When you start playing you should pick a Sloop if you’re out to play fast and dirty, and a Galleon if you want longer, involved adventures with a bigger crew.

The basics of sailing in Sea of Thieves

Your ship starts with its anchor dropped, and you won’t get anywhere without raising it. Similarly, you’ll move very slowly, or even not at all, without hoisting at least one sail. Once you’ve got a sail up, your ship will turn in whatever direction you’ve turned the wheel at the helm. You can angle the sail to meet the direction of the wind (which is called trimming), which will give you greater speed but means your turns are much wider. Reefing, or reducing, the sail will slow you down but give you sharper turn times. Each sail on your ship has two ropes to raise or lower it and two to adjust the angle, but you only need one to make either change – it just takes longer if only one person is working on the sails.

You should reef the sails a bit before you play to drop anchor anywhere, because if you’re moving fast your ship will jerk against the anchor and can swing around to hit land or nearby rocks if you’re not careful. Navigating can be tricky if you’re playing alone. You can check your bearing by looking at the compass next to your helm — the centre of the wheel is marked by a straight spoke with a gold tip, and your controller will buzz to let you know you’re back at centre – but to check you’re going towards the island you want to, you’ll need to check the map.

Every ship has a master map that shows all the islands in the area. The Sloop’s map is at the aft (back bit), in the main cabin, but you can look over the back rail when you’re at the helm so you don’t have to run downstairs to check you’re heading the right way if you’re sailing alone. The Galleon’s map is down a level from the main deck, just at the foot of the stairs, which is why it’s way more difficult to sail a Galleon.

But just deciding to sail to the nearest funny-shaped landmass doesn’t count as a voyage. Voyages are basically quests, and you buy them from one of three trading companies: the Gold Hoarders, the Order of Souls or the Merchant Alliance. First level voyages are free but they’ll get more expensive as you rank up. The Gold Hoarders send you out to find treasure on specific islands, the Order of Souls want you to kill powerful undead skeletons and return their souls, and the Merchant Alliance want you to transport animals like pigs, chickens and, er, snakes. You can find a rep for each of these at every Outpost (the Merchant trader is always on the dock, the Gold Hoarder has a blue tent in the town and the Order of Souls has a shop with purple hangings and a lot of coloured glowing bottles outside). Buying quests from them will then allow you to propose them as voyages at the table in your ship – for the Sloop the voyage table is opposite the map table, but in the Galleon the voyage table is in the captain’s cabin on the top deck. Once all the crew members have voted on which voyage to take, you’re off!

You’ll get the relevant treasure maps or bounties in your map inventory, which is mapped to your right bumper on an Xbox controller. These will tell you which islands you need to find, so you can decide as a crew where to go first. Remember that you may have more than one island to visit per voyage, and there may be more than one chest, skull or animal to collect at each island.

How to use your inventory in Sea of Thieves

Your main inventory is a radial menu mapped to your left bumper on an Xbox controller. Clockwise from the top you have your consumables — bananas, cannon balls and wood — followed by your spyglass, shovel, lantern, bucket, compass, and then we’re back up to bananas again. The second radial, which you get by hitting ‘more’ includes your two musical instruments (for playing piratey tunes), your grog tankard (for drinking grog) and your pocket watch, which will tell you the in-game date and time, which is pertinent for voyages from the Merchant’s Alliance.

Your spyglass allows you to scan the horizon for enemy ships, the shovel is for digging up treasure (y’aarrr), the bucket is for bailing out water, and the compass lets you orient yourself on islands or when you’re not at the helm of your ship.

Make sure you’re carrying a few of each consumable with you. You need bananas for health, so they’re especially useful, and need to be holding wood to patch up holes in your ship. There are barrels to store more of them on your ships as well, and it’s a good idea to keep those stocked up. You can and should check barrels on islands for more when you’re low.

How to use your weapons in Sea of Thieves

All pirates start with a cutlass and a blunderbuss that has way more range than you suspect it would have had historically, but you can buy different guns and cutlasses at the weaponsmiths in Outposts (though they all function the same and only look different). Pressing Y will hot swap you from whatever you were doing to drawing your weapon, and Y again will switch you between your sword and gun, whilst to fire or swing your weapon you need to hit right trigger. The blunderbuss has low accuracy but high damage, and one shot on target will take out low level skeletons in one go, but you do have to reload after each shot and have limited ammo. You can refill ammo at an ammo crate from your ship or in front of the weaponsmith (ammo crates themselves are unlimited and don’t need to be resupplied). The cutlass is faster, and you can block with left trigger, but you have to get closer to the enemy to attack.

How to use treasure maps in Sea of Thieves

You either pick up maps from doing voyages for traders in outposts, as described above, or by finding fun things like messages in bottles. Once you have new maps in your inventory you’ll be alerted to it by a fun mystery noise and a message telling you you have new maps popping up at the bottom of the screen (the design is very intuitive like that). Treasure maps can be found on a radial menu on your right bumper, so you can cycle through, select the one you want, and then press right trigger to look at it – you can also flip the map around to hold it up and show it to one of your crewmates. Some maps will just show the shape of the island with a red X on top of any treasure chests, so that you have to find it on your nautical map and then find the treasure location by the look of it alone. Others might be riddle maps, which point you to the island by name and will fill in more clues when you arrive, giving you instructions in rhyme.

How to patch a ship in Sea of Thieves

When you’re first starting out as a fearsome buccaneer you might get into a few scrapes – either with other fearsome buccaneers or up against a rock that you didn’t know was right there, I am turning as hard to port as I can Brad. To stop your ship from sinking you have to patch up the holes a crash or a cannonball will make in the hull – do the ones below the waterline first – as well as bail out the water with your bucket. If your ship is too full of water you won’t be able to patch the holes already in it, plus it drags the whole thing further down and will bring holes that are higher down below the waterline, so it’s good to have one person bailing while at least one other works on patching the ship up. You can’t patch a ship without wood, though, so make sure you have a healthy supply. There’s usually some freebie wood in the barrels in the bar you spawn into at the start of a game.