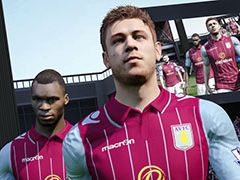 Chemistry is the bedrock of Ultimate Team in FIFA 15. If your squad isn’t completely in sync, players will wander out of position and you’ll start leaking sloppy goals. Plus you’ll fail to create chances because players won’t make the runs between the lines to carve open defences.

Knowing how to create a team with full chemistry, and what these lineups should look like on the screen, is important to establishing a squad capable of earning you a place in the top divisions. Follow VideoGamer’s tips and tricks to creating a well-oiled Ultimate Team.

Player and Team chemistry in FIFA 15

There are actually two different forms of chemistry: individual and team. You overall team chemistry can be viewed on your team lineup page, to the right of the screen below the squad’s rating.

Getting this to 100 or as close to 100 is essential. You’ll notice it’s much easier to string multiple passes together and play through balls into space for teammates with higher chemistry. Plus their defensive positioning will be better, too.

To view an individual player’s chemistry in your starting lineup, hover the cursor over their player card and flick the right stick until you see their stats, which will also include loyalty, contract and other other information.

Team chemistry is rated on a scale of 1-100, whereas player chemistry is 1-10. The number is dependent on different factors, which we’ll come to in a bit.

Team and individual chemistry in FIFA 15

On the screen, you should see lines connecting each of the players on the pitch, as well as dots below each player card. The dots and lines will be coloured either red, orange or green, and refer to how connected the player is to his teammates and position.

Red – Player is placed out of position, and will receive a penalty to chemistry. A goalkeeper playing in midfield, for instance, will have a negative effect on chemistry.

Orange – Player is playing in a position similar to his natural place on the pitch, and will take no penalty nor boost to chemistry.

Green – Player is in his natural position, and will receive a small chemistry boost.

Red – Players share nothing in common, and will receive no chemistry bonus.

Orange – Players share either the same league or nationality in common, and will receive a small chemistry bonus.

Green – These players share two of nationality, league or club and will receive a large chemistry boost.

Trying to get all green lines throughout your team is tricky, but it is possible to get a team with full 100 chemistry and still have some red lines amongst it, as long as you negate those with green connectors elsewhere.

Manager cards themselves cannot boost chemistry, but the league does. If the league which the manager is listed as coaching in is the same as the players’, they receive a plus one boost to individual chemistry, which in turn can boost overall chemistry. If you have a mostly-Premier League team, go and buy a BPL manager league card and apply it to your coach.

Players who are of the same nationality as the manager also receive a plus one bonus to individual chemistry, which is shown by the little green or white icon next to the loyalty shield on each player card.

If you use the same player for 10 matches, he will receive a loyalty bonus. There are shields on every player card (select the card and use the right stick to view the back of the card), this will change from white to green to show a player has earned the loyalty bonus, which grants a plus one to individual chemistry.