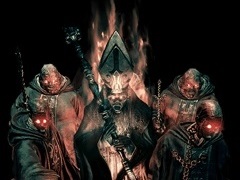 Dark Souls 3 Guide: How to Beat Deacons of the Deep Boss

Deacons, we’ve found, are a traditional role within the Christian church, although the importance of the title changes depending on the particular denomination, and the Deacons in this case certainly don’t seem to behave in a traditionally Christian manner. They do appear to have unionised, though, because the boss is actually a big group of them working to fight you together. They’re not spread out, though. They cluster together, like so many infernal penguins trying to pass over an egg, except the egg is an evil soul, or something.

There are a few ways to get to the boss arena, depending on how many of the shortcuts you’ve opened up.

From the Cleansing Chapel bonfire you need to go up and out into the main hall where the giants were chilling out (or possibly are chilling out if you haven’t killed them yet). At the end where the third shortcut exits there’s a set of stairs in the far corner, leading out of the sludge that the giant was/is standing in there. Head up those and follow the path around to come out with the main altar on your right. Run behind this and down through the doorway there to get to the Deacons.

If you’ve opened up Rosaria’s Bedchamber as a bonfire then you can start there, go down the stairs and cross over the hallway on top of the barrier you can raise from there, and the right and down again to the lift, which will take you very close to the main altar.

If you’ve opened up the doors of the Cathedral in the same area as the top of this lift, you can also run through here from the Cleansing Chapel by going up the ladder shortcut and running straight up and into the Cathedral.

2. The Deacons of the Deep first phase

Look, we’re not trying to sound like dicks here, but this boss fight is pretty easy. To do damage to the Deacons you have to attack and kill the one that their shared soul has jumped into, and he’s pretty easy to spot by dint of the general red aura around his head – but he has to actually be killed while hosting the soul to do damage. Once that Deacon is down the soul will hop into another one.

If you’ve levelled even moderately by the time you get here then you’ll be able to mow down everyone pretty easily, with the only things to watch out for being a) the rotund Deacons, who can deal some heavy damage, b) the spellcasters lobbing their fireballs and c) that you don’t get surrounded, because they will all crowd around in their efforts to hit you, and no matter how many you take out they’ll keep spawning in. Use weapons with a wide swing if you’re melee, to scatter as many as possible, and spells or projectiles that do area damage if you’re a ranged player, since it can be hard to get a clear shot on target.

3. The Deacons of the Deep second phase

It the second phase the Deacons are like’Mate, this player is doing this way too easily, lets step it up a notch.’ The soul will stop leaping around between Deacons and settle in one that has a mitre and all those kinds of things, while the spellcasters will start hurling fireballs with much greater frequency. It’s a good tactic to thin some of them out, because then you have to pay much less attention to your surroundings. You can also use the Deacons’ tendency to trail after you to draw them away from surrounding the one Deacon you now need to target.

What you do actually have to worry about, though, is that four new spellcasters will spawn (around the edges of the group, but still very much part of it). They’re taller than most of the other Deacons and won’t move anywhere near as much as the others. They start channeling and concentrating dark magic by holding their hands above their heads and forming it into little nebulous magical clouds – you know the type, we’re sure – and their spells are incredibly powerful if one actually gets unleashed, so keep an eye on them and make sure to take one out every so often to break the cycle.

That’s…basically it. Hit a guy and watch out for the other guys. Traversing the Cathedral is probably more difficult than the Cathedral boss fight itself, but this isn’t an optional fight. You need to defeat the Deacons to get the ‘small doll’, which despite being (probably intentionally) inconspicuously named is in fact very important, and opens the seal to let you into Irithyll of the Boreal Valley (which is a city, not another boss). For that, you’re going to need to get through Farron Keep.