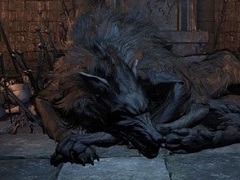 Farron Keep in the game menu is treated as almost being part of the Road of Sacrifices, and it is quite a small area in comparison to other bits of the game, but it’s a significant one that deserves it’s own guide, which is what you’re reading. This will give you the locations of key items and the bonfires, as well as how to get into Farron Keep itself, but without substantially spoiling all the exploration and items you can find for yourself. We will say, however, that you should wear your best and most poison resistant items when heading into the swamp around the Keep, because it is extremely poisonous and will stack poison on you as you wade through it. Get some Purple Moss Clumps too.

As you leave the Road of Sacrifices via the ladder you’ll basically drop on top of this one. The doorway that leads out onto the swamp is also right in front of you.

This is near the centre of the back wall of the swamp. The doors that lead to Farron Keep itself, which, when you first enter the swamp, will be firmly closed, are on the back wall, and immediately opposite them is a stone path sloping up, which ends in a little crumbling room and the bonfire. If you lack the HP to wade through the middle of the swamp you can head left from the first bonfire, following the lit fires on the small islands in the swamp in a curve until you come to a larger rocky island rising up, with some stone steps carved into the side (near a half sunken dome and a piece of collapsed road jutting up out of the swamp). Going up onto this and down the other side back into the swamp will lead you to a second, similar island, and the room with the bonfire. Both these islands have one of the burning signal towers which you need to extinguish to get in Farron Keep, incidentally.

From the Keep Ruins bonfire look to your right. You should see a much larger stone building, which rises up and supports part of the bridge you stood on at the start of the Undead Settlement. This tower has a ladder on one side, guarded by a group of slugs at the base. Climb it to find the bonfire, and the Old Wolf of Farron himself. You can pray to him to join the Watchdogs of Farron covenant.

The tower here is pretty cool. You can go out onto the balcony and use your binoculars to look around and figure out where you are. You can also get on the lift in the corner which will take up up to a stray demon mini boss on top of a bridge. You can also head right on the bridge to a gate, and you can drop off it (to the right again) onto some ledges to get around the gate and to an area with a dragon corpse and a bunch of crystal lizards and other cool stuff.

Keep Ruins bonfire will open. Head inside and around, up a flight of stairs which has a strong knight enemy loitering around the top. You’ll be in a wooded area with the stone path continuing through it. Turn right instead of following the path and you’ll find a stone ruin which you can enter to find this bonfire, which is the closest to the area boss.

Appears after you defeat the Abyss Watchers boss.

Farron Keep doesn’t have shortcuts, as such. Much like the Crucifixion Woods area at the Road of Sacrifices, it’s just one big swampy area for you to splash about in. However, the Farron Keep Perimeter bonfire does lead to a gate which you can open to link back to the Crucifixion Woods. If you wanted to. For whatever reason. There’s a break in the wall between the bonfire and the gate which will let you drop into the poisoned swamp again, and there are a couple of cool items to pick up here (including a new free spell if you’re so inclined).

The Estus Shard gives you an extra use on your Estus flask, and the one in this area is in the left hand side of the swamp, near the base of the first signal tower you need to extinguish. You can see several pieces of collapsed road jutting up out of the swamp. One of them has a slug guarding an item orb underneath it. This is your shard.

Again, in the left hand area of the swamp, but further out and behind the first signal tower, is a smaller tower on quite a large, flat expanse of clear ground. A dark wraith will run at you. He’s pretty fast and his attacks spin, so watch yourself. Inside the tower is a corpse with the Sage’s Coal. You can give this to Andre at Firelink Shrine to open up more infusion options for your gear.

This can be given to Orbeck back at your little shrine homebase, to learn some new Crystal sorceries. If you start at the Keep Ruin bonfire and look left as you come to the top of the ramp down to the keep gates, you might be able to see an item glimmering in the distance (although sometimes what you think is an item glimmering in the distance is actually a slug). Anyway, head down the ramp and keep going left. Once you spot the giant crab (who is also protecting some potentially useful items) you need to angle left again and keep an eye on the back wall until it reaches a little corner, with a bunch of pots and some puffy humanoid mushrooms (which are apparently dead). The scroll is on a dead body against the tree here.

This will boost the effect of your Estus Flask. As you go down the ramp from the Keep Ruins bonfire head right. Nearby you should see a small tower, with a lot of slugs at the bottom of it. Dispatch them and you’ll be able to get to the bone shard, which was right in the middle of them.

In the chamber of the Old Wolf of Farron bonfire you should be able to look around and see a dead body hanging from an alcove in the wall. Go back out onto the balcony around the tower and head around the side to the left until you reach where that body would be in comparison to the outside. There’s an illusory wall which you can hit or roll into to get to the corpse, which has the ashes. These you can give to the creepy Handmaid at Firelink Shrine to get more purchasable items from her.

So, as you enter the poisonous swamp you’ll see, on your left, a message cryptically instructing you to ‘extinguish three flames’. What this actually means is that you have to turn off the light burning in each of the three signal towers standing in the swap. The game will lead you to the first one if you look for the fires on the islands and follow those around to the left in a little arc. The first large island with the signal tower on, and the steps leading up to it, will be on your right. To extinguish the flame you need to interact with the little shrine at the base of the tower.

To get to the next tower, exit the first one by going down the stairs on the other side so you’re back down at the swamp level. On your left is another island with some fires, and a red-eyed enemy ready to leap on you. Circle around to the right a little and you’ll find another signal tower island with a flame to extinguish, which will then, if you follow the only new path from the tower there, lead you to the Keep Ruins bonfire.

From there you can find the last tower by heading right and back into the swamp, past the small tower with a bunch of slugs pulsating around it in, and the large tower with the Old Wolf of Farron bonfire. You’ll run into the third tower’s island before long; there’s a giant magical goat using an entire tree as a club near the stairs. There’s also another one at the base of the actual tower, but as long as you get the flame extinguished you don’t have to fight either of them if you’re not up to it (they can also do a lot of magical damage with some of their attacks).

If you get lost at any point you can run up one of the broken shards of road in the swamp, or find any high ground at all, and use your binoculars to spot the flames burning on the top of the towers. Once all three are out you can advance from the Keep Ruin bonfire and make your way up for the boss fight with the Abyss Watchers – the first of the four Lords of Cinder you need to beat.