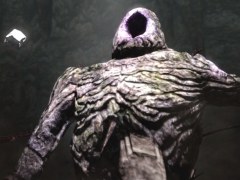 The Last Giant is the first boss players should face in Dark Souls 2. It’s found in the depths of the Cardinal Tower and, as the name suggests, is quite big. It can kill you with a single sweep or stomp if you’re not careful, but follow this guide the you’ll walk away without a scratch, and 10,000 souls to upgrade your character.

First up, this fight is made much easier if you have the Fire Longsword. This sword can be found early in the game and is one of the most powerful early weapons. You can read our full guide on where to find it right here.

Once you pass through the mist, a cutscene will play showing you The Last Giant waking from his slumber. After the cutscene, take a few steps back and let the Giant move towards the centre of the arena. You want to keep the creature close to the middle of the room at all times, leaving you space to roll escape any attacks.

As it approaches, wait for the Giant to begin its attack, then sprint between the legs and quickly turn around to take a couple of swipes at its ankles. Only hit the thing twice, as it will try and stomp on you, so you need to quickly roll away from danger. Make sure you don’t use lock-on for this fight, as it will disrupt your ability to run under the boss and quickly turn around to attack.

Once The Last Giant is down to 50 per cent health, it will rip its arm off as a means of increasing the range of its sweep attack. This won’t have any effect on your strategy, so just keep plugging away and the Giant will soon fall.

You’ll receive 10,000 souls, the soul of The Last Giant and the soldier key upon its demise. The soldier key will help unlock the orange and black doors found throughout the tower, and will give you access to the second boss, The Pursuer, but you should explore other areas before trying to take on this knight.

Take a look at the video below for our battle against the Giant. As you can see, the Fire Longsword is a great help for dealing lots of damage each time.