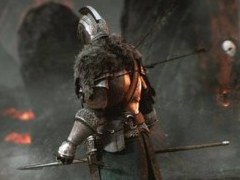 The Fire Longsword is a powerful weapon that can be found early in Dark Souls 2. It is vital for any character build that focuses on melee combat. With so many weapons susceptible to breaking, and your character yet to develop into a giant killer, you need to grab this sword as quick as you can.

Begin your quest for the sword by entering the Forest of Fallen Giants. From the bonfire in Majula, follow the cliff face to enter an archway leading towards the Forest of the Fallen Giants. Keep proceeding through and you’ll eventually find the first bonfire to the right in the forest. Kill all the soldiers and head up the ladder, where you’ll find an ambush waiting for you in the form of a few more soldiers. Turn around and climb back down the ladder. The soldiers will either descend the ladder, or fall down, either way, they are much easier to kill in fewer numbers.

Ignore the archer up high and the knight sitting in the middle of the area. He doesn’t speak, and hitting him will cause him to fight, and he’s very tough.

Back up the ladder, proceed through the mist and head straight down the hall into the room with two hollow soldiers. Kill these guys then exit, turn left and kill the hollow soldier. Head up the hallway and kill the second soldier. This new type of enemy is tougher to kill, so be patient.

Walk up the first flight of stairs, then sprint past the archer as there’s a knight waiting to throw firebombs at you from behind. You can ignore these three enemies and head straight up the ladder. Open the door to your right to ignite the second bonfire. This is the Cardinal Tower bonfire. Just outside where you arrived is where we’ll find the Fire Longsword.

If you have 1000 souls, speak to the merchant and buy Lenigrast’s key, it unlocks the blacksmith’s door back in Majula which allows you to repair any damaged items from now on.

Head back outside and below you is a grassy area filled with hollow soldiers. You can make your way down here by walking to the edge of the entrance and dropping down onto the planks of wood.

You have to drop down once more to the second ledge to the left. Be careful as there are two hollow soldiers on this platform. You can try and perform a drop strike on one of the guards, but if you miss, it could turn very ugly. Your best bet is to sprint down and past them, then turn back and fight. Be aware of your surroundings, locking on and moving to dodge attacks without thinking about the limited space will see you falling to an early demise.

There are two ways to get down to the area where the longsword is kept: the first is taking the ladder on this platform, or you can sprint across, jump to the second wooden ledge and climb down the tree.

Either way, you need to take out all the hollowed infantry before trying to get the sword, as they can really disrupt your progress.

Once you’re at the bottom, there’ll be several hollow soldiers. Try to fight one enemy at a time by moving forwards slowly until they notice you. The weapons found early in the game can take five or more hits to kill a single foe, which severely affects your stamina. You have to attack guys then retreat to rebuild stamina, which is much more challenging against multiple opponents.

If you manage to attract the attention of several hollows, climb back up the ladder in the corner by the barricaded entrance, and wait for each enemy to follow you, killing them as they climb.

If they don’t follow you, take the second path down the tree and try killing the rest of the foes.

Now all the soldiers are dead, it’s time to get the sword. There are two caverns along the side opposite the castle, one is dark and leads to a dead warrior holding a Hollow Soldier Helm. The second cave will be covered in embers, and at the end will be some form of fiery toad who spits waves of three fireballs at you. It will change its aim as you get closer, so don’t think you’re safe. Hug the left-hand wall and wait until he finishes a round of fire, then sprint as fast as you can and open the gate. Once you’re inside, the frog can’t hit you.

Don’t open the chest as soon as you walk into the room as two guards will follow you inside. Kill these soldiers, then open the chest to get the Fire Longsword. You only need 10 strength and nine dexterity to wield it, and it deals fire damage with every hit.

With this sword, most enemies in the early parts of the game will only take three or four hits, making it much easier to work your way through the Cardinal Tower and beyond.