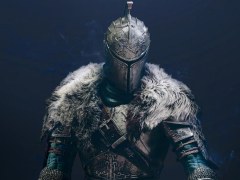 There are eight different character classes in Dark Souls 2, each with their own starting stats and play styles. Whether you want to build a character that is melee or magic focused, or simply starts at a severe disadvantage, our complete breakdown of every class will help get you started in the world.

As well as the eight classes, you get to choose a gift. When you begin Dark Souls 2, it can be tough to understand what exactly some of these items are. Luckily, we’ve listed the use of each item below.

Before we go into the character classes, it’s important to know what each of the attributes mean.

The first stat is your character’s soul level (the image of a face).

This image of a heart is your vigor, which represents how much HP (health points) your character has. While you can upgrade this stat to upgrade HP alone (although once past a certain level, it will begin to improve your petrify resistance), there are other attributes that also upgrade HP.

The number next to the pair of legs represents stamina. Once you begin playing the game proper, using souls to upgrade your endurance will also boost health, physical defence and poise stats.

The image of your chest is vitality, which represents maximum equip load. Remember that characters are more agile if your equip load is half or less than the maximum load your character can carry without becoming over-encumbered.

This affects the number of spells you can have equipped at once and how quickly you cast them (it’s the image of the book). Increasing this stat throughout the game will up the number of attunement slots, as well as increase your cast speed and raise HP.

The picture of the arm shows how much damage your character can deal with attacks. Also affects what type of weapons they can wield.

The image that looks like crossed arms affects defence. This also affects all resistances, as well as evasiveness and blocking.

The star shows your faith. It is required for miracles and other spells. Upping this increases cast speed, as well as HP, defense against and bonus damage for fire, lightning and dark. It also improves bleed damage and petrify resistance.

The warrior is for players at their best with a sword and shield. Defence will be your best offence in battle. The high strength means this character will deal the highest damage to enemies at the start of the game.

Travelling knight. High HP and adaptability. Tough to take down.

The knight doesn’t start with a shield, but you’ll find one soon enough in the game. The knight has a better spread of attributes than the Warrior, and also has higher HP.

Dark Souls 2 has a new emphasis on dual-wielding weapons, and this is the best class for taking advantage of the new mechanic. The swordsman is also pretty nimble, so rolling is pretty effective with this build.

The bandit’s high dexterity out the gate means this is the class to go for if that’ll be the focus of your build. The bandit’s effectiveness with a bow will prove very useful throughout the early parts of the game.

Cleric on pilgrimage. High faith and miracles guide the way.

Don’t expect much hand-to-hand combat with this build. Miracles will be the main focus in the early hours, and most basic enemies will be tough to deal with thanks to their speed. The healing miracle the Cleric has learned from the start is very useful though.

The Sorcerer has Soul Arrow from the start, which is quite powerful but is limited to 30 uses between lives/bonfire rests. Casts spells relatively quickly, but make sure you learn the distances you need to be at to cast magic without being hit by enemies.

Well-travelled explorer. Not terribly powerful, but has many items.

Not a very useful build long-term. Yes you get a bunch of healing items from the beginning, but you’ll soon be picking up a bunch of these plus be gaining Estus Flasks along the way, making this class a Jack of all trades, master of none type.

Unclothed, origin unknown. Has nothing to fight with, except life-affirming flesh.

For the masochists out there, this is the most difficult build of the lot. Like the name suggests, you get nothing: no armour, no weapon, no shield, zip. Things will be tough from the off, so be prepared if you go with The Deprived.

Worth taking for players expecting to get in the middle of the fight along the way. You won’t use this ring once you start picking up more along the way, but it takes several hours before you build up a collection of five or more rings. The extra health boost can prove very useful.

A familiar looking effigy. Returns the hollowed to life.

You’ll pick up plenty of human effigies exploring the world of Dark Souls 2, it’s not worth wasting your early gift on an item so plentiful, especially as you can grab the Ring of Binding in the Tower of Blue that lessens the effect of Hollowing by half.

This collection of healing items can prove useful in your first hour or two, but as with the human effigy, you’ll be collecting plenty of healing items in chest and on fallen soldiers as you explore.

Returns you to the bonfire last rested at. Having one may ease your mind, but there are no easy journeys.

Seed of Tree of Giants

A seed grown from a Tree of Giants. Inedible.

Use this when someone invades your world and enemies will focus their attacks on the invader, which can be very handy when you’re a low-level build.

Toss into a bonfire to raise the strength of nearby foes. Only for those who seek greater challenges.

Probably best for those who chose the deprived build. Any masochists seeking greater difficulty in Dark Souls 2 should take this.

A simple petrified lump. It may be of some use, some day.

You can leave this in the nest in Things Betwixt and you’ll receive another item in trade.