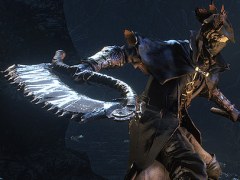 Bloodborne Guide – How to survive New Game Plus

Although you may be an incredibly high-level character, your enemies will be much tougher this time around, even in Central Yharnam. Foes that once took a single hit to go down could now take up to four or five, so it’s important to be as vigilant as you were on your first journey.

Villagers are as likely to kill you now as they were back then, so stay on guard and go back to the basics.

Hopefully, on your first run you found a high-level Moon Rune (the intensity of the Rune is shown by how clear the symbol is in the menu). The Moon Rune increases the amount of Blood Echoes you gain from fallen enemies. With items, weapons and character upgrades costing significantly more, you’re going to need this Rune in order to stand a chance at improving throughout New Game Plus.

Make sure to unequip this Rune for more defensive ones when you’re ready to take on a boss. Although the rewards stand to be far greater if you beat a boss with the Moon Rune, it’s a much tougher battle without the defensive buffs found with others. If you’re confident enough, then by all means, but when struggling, switch your setup at the Memory Altar.

Spend some time in Yharnam farming Blood Echoes. You’ll have a hell of a challenge even surviving the first city, so expect to die quite a few times running around here, but with the Moon Rune equipped you’ll earn plenty of Echoes. Even simple villagers will reap around 890 Blood Echoes with each kill, so take some time here to earn and level up your character even further before plodding on.

When you start the game anew the Bath Messengers will be selling Gehrman, The First Hunter’s weapon for 60,000 Blood Echoes. While at first it probably won’t be as strong a weapon as the one you have taken all the way through the main game, it’s worth keeping in your arsenal and steadily upgrading through your next run, as you’ll no doubt have plenty of Blood Shards to spend anyway.

Visceral Attacks become essential in New Game Plus. Learning to time your Quicksilver shots during the half-way point of an enemy’s swing is vital to killing them quickly.

Spend some time working against some of the isolated villagers and trolls timing your shots. If you run out of Quicksilver Bullets, farm from some of the rifleman near the Central Yharnam lamp rather than spending Blood Echoes or Insight.

With enemies being much tougher, taking on crowds isn’t always the wisest decision. Try whittling them down and isolating enemies by leading them up stairs and along narrow paths, making fights easier. If you do find yourself surrounded, run away until they give up the chase, then return to alert them to your presence.

Don’t forget to use your Pebbles, too, as they become a big help in getting the attention of just one or two foes.