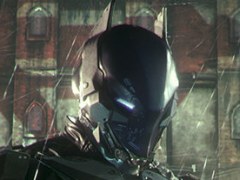 Bones stripped bare beneath a warning light, pay heed, seafarers, not to feel his bite.

East of ACE Chemicals is a Lighthouse, just inside of which is a pile of bones. Scan these to solve the riddle.

An open house for bed and dinner, is this sanctuary run by saint or sinner?

In the Northern parts of Chinatown lies “The Deacon’s Mission”, scan the sign over the door to solve it.

I bet you weren’t invited to this lavish do, I wonder how many went dressed up as you?

Not too far from Perdition Bridge you’ll see a clock tower, head into the offices inside. In one of the rooms will be a poster with Batman’s mask as the centre image, scan it.

A bat uses these to see at night, the doc’s didn’t work and his cure caused a fright – inside Dr. Langstrom’s (Man Bat’s) laboratory will be a whiteboard with a diagram of the inner ear, scan it.

Overgrown, abandoned, the inmates set free, madness could never be held within me.

You’ll see the remains of Arkham Asylum from the southeastern shoreline (head for Falcone Shipping and look at the horizon for four lit pillars), scan them.

She stands at our centre so that we may not weaken, a symbol of hope, a towering beacon.

Scan the Lady of Gotham in the centre island.

Hope shines brightly in a city this dark, find the source of that signal and you’ll soon hit your mark

The bat signal is located on top of the GCPD building in the southern region of Bleake Island.

Always looking for names to besmirch, where does the newsman conduct his research?

Jack Ryder is inside an interview room inside the GCPD, just next to the final set of prison cells.

Joining your mission can come with a cost, this empty reminder shows just what she lost

Inside the clock tower, you’ll need the remote hacking device to unlock the remote switch, inside is Batgirl’s costume.

A souvenir from a previous life, why hold a hand when a hook will suffice?

Cash lost his hand in a battle with Killer Croc, and now has a replacement hook, he’s usually inside the GCPD at the reception desk, scan the hook.

Next to the reception desk in the GCPD is the comms room, scan the white wall which contains a breakdown of Deathstroke.

It doesn’t take much to tame a Cat, make them wear this, then call the Bat

Scan the collar around Catwoman’s neck.

You forced this contraption over my brain, I’ll reward you with punishment, debasement and pain

Inside the final Riddler challenge room is a hidden room in the far corner, scan the helmet on the desk.

Friends of the Waynes though not as wealthy, their memorial keeps Gotham healthy

On the northwest section of the island is Elliot Memorial hospital.

The highest building in Arkham City, a Strange man worked here, he took no pity.

Head to Wayne Tower, face east and scan the giant building in the distance (Wonder Tower).

The Prince of Gotham sits high in his tower, yet this picture recalls a happier hour.

Scan the photo above the bar inside Wayne Tower.

The League of Assassins stuck Blades through hearts, now they impale each other’s art.

In Kingston, there’s a run-down shack with a burning drum outside (next to an orange ‘PARKING’ sign), scan it.

A natural cure for Scarecrow’s doom, your saviour’s gone but still in bloom

Are you suffering from a mental split? Take out the trash before you defend it!

Disarming, charming, quite the inquisitor. She’ll pull back the vale, whoever the visitor.

A former warden who had a Strange turn, his appointment as mayor was a cause for concern.

Along Grand Avenue, next to Johnny Charisma’s theatre posting is Lacey’s department store, on the side of which is a poster for Quincy Sharp’s mayoral campaign.

Far away the deflated brute roams, leaving behind what he couldn’t ship home.

On the western side of Port Adams are some Sionis Industries shipping crates, the top one of which is open. Inside lies Bane’s costume, scan.

A million dollar home for a spoilt child, his parents are dead but his parties are wild.

Head for the far side of Ryker Heights, in the distance, across the water is a lit up mansion, zoom and scan.

He lives and dies in seven days, this beast you’ve tamed but his song still plays

You can find a Solomon Grundy wanted poster in Drescher. Just under Perdition Bridge is a red barrier, vault it and head immediately over the iron barrier left, there’s a blue door, inside is the poster.

A psycho killer’s grim design, what has an angle but just one line?

On the shore just opposite the burned down ACE chemicals, you’ll see assembled dead bodies, under an arch, scan them (they’re beneath the airships, at the tip of the one which you can enter the front of).

He saved the date! All Hallow’s Eve! But this calendar killer too his leave.

In Drescher’s underground, head towards the dead end, past Eillengers, turn right and there’s a secret room which the Calendar Man has prepared, which you can grapnel up to, scan it.

Roll up! Roll up! For the circus of the strange, this porcine professor is clearly deranged.

In the underground of Ryker Heights lies a pink neon-lit room called “Pretty Dolls Parlour”. Head inside (you must have completed the Perfect Crime most wanted mission), in the main room, scan the poster on the wall of the Circus of Strange.

This tumbledown ruin’s not looking its best, what do you expect from the Penguin’s old nest?

In the Otisburg section of Founder’s Island lies Cobblepot Manor, scan it.

Crusaders of old had a trusty steed. How much horsepower does a Dark Knight need?

An ancient order, lust for power consumed, their patron saint is here entombed.

There’s a cemetery next to Poison Ivy’s giant roots, scan the tomb along the wall lit up by a floor lamp.

You? A father? Don’t make me laugh. You overwork and break your staff.

Enter the quarantine zone and scan the isolation cell on the left as you enter.

She and her love are no longer together, she’ll keep the flames burning forever and ever.

Head to Stage A, you’ll need the voice synthesizer to open the gate just before the door leading into the stage itself, inside is a memorial to the Joker, scan it.

A visual artist with burning ambition: prove he made movies before his ignition.

Head into Stage A and take the door to the right, scan the Inferno wall mount.

The Arkham Knight’s headquarters is in south Drescher. Head to the top of the building (where you, the Arkham Knight and Jim Gordon meet) and take the elevator down to get inside.

Vengeance burns darkly inside the betrayed, as they stare at reminders of debts unpaid.

There’s a noticeboard on the ground floor covered with pictures, next to some Arkham Knight ammo crates, scan it.

A psychotic killer who caught the fear bug, the fruits of his research: a powerful drug

From the elevator, head up the stairs and keep going straight, you’ll see some bright green gas flowing inside a room, scan it.

With a fluffy white coat and ears standing tall, what burrowed the hole in which Alice did fall?

As you proceed down the elevator shafts you’ll come across a glass cabinet with white rabbit costumes, scan.

There’s an albino chimp in a cage in the research lab.

A bragging reporter’s worse than a narc, but perhaps the assassin has found his mark?

In the airship with the destroyed bow, in biological engineering there’s a magazine on one of the desks on the top floor, next to a computer. The magazine has a picture of Jack Ryder with a cigarette burn in his head.

Need something moved quickly, in a freezer? This company’s owned by a cockney geezer!

Scan the poster with the “North refrigeration” logo on in subject testing (requires voice synthesizer).