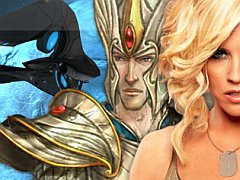 By now you’ve hopefully seen our Top 50 Games of 2008 and viewed our Top 10 video feature (if not, why not?), but what about the best games made for each individual format or platform holder? Good question. Luckily we’ve thought about the answer, and put together the Top 10 PC games of 2008. Before you get the pitchforks out and rustle up an angry mob, this list deliberately disqualifies titles like Fallout 3 and GTA 4. These are games developed by studios that had the PC in the forefront of their minds during development.

What we said: When Warhammer 40,000: Dawn of War came out just under four years ago it didn’t revolutionise the RTS genre, but it did offer a compelling, solid, fun and, for its time, spectacular strategy experience. However, it did feel slightly lacking in the playable race department, offering only the Space Marines, Orcs, Eldar and Chaos Marines for future fantasy fans to sink their fangs into. Three expansions and nine races later we’ve finally got our hands on the Dark Eldar and the Sisters of Battle in what’s promised to be the final Dawn of War expansion ever. Having pumped hours into the two new races, stayed up late into the night busting open the ultimately unnecessary single-player campaign meta-game and stared bleary-eyed at the game’s new air units, we can confirm that Soulstorm is bloody brilliant and a fitting finale for the RTS franchise. Phew.

What we said: Warhammer Online feels like Mythic’s answer to the problematic question posed by Blizzard’s World of Warcraft. Every virtual sinew of it screams ‘our game is better and here’s why’. From the player versus player combat to the questing, the game is full of nice refinements that feel as if they’ve been borne out of a frustration the design team has experienced when playing WoW. For this reason we reckon WAR is going to have a much tougher time bringing new players into the MMO genre than WoW did when it was first released a few years ago. Sure, there will be fans of the Warhammer universe, perhaps players of the popular table-top game, who are sure to enter the fold. But WAR Online is, after all is said and done, unashamedly hardcore and, by its very nature baffling to anyone who’s never played an MMO. Instead, we reckon Mythic’s focus is to steal players from Blizzard’s virtual world. This is something we can see it doing in spades.

What we said: GTR Evolution is definitely an evolution of the series, as opposed to a revolution, and while the game is in need of a graphical overhaul, the rest of the game is all you could ask from a racing simulation. Not only is the AI strong, there is a lot of community support (not only in terms of online races, but mods and setup files as well), but the handling model is flexible enough to allow easy access for more casually inclined players while being realistic enough for the dedicated simulation audience to make use of the slightest setup tweak. The Nordschleife circuit is the crown jewel of the game (and the Race series) and justifies a purchase regardless of the graphical issues. Some may call it The Green Hell, but we prefer to call it Tarmac Heaven.

7. Sins of a Solar Empire, Stardock

What we said: Sins of a Solar Empire will not be everyone’s cup of tea. However, if you’ve been hooked to titles like Galactic Civilizations, experiencing ‘4X’ strategy in a real-time environment may be a revelation for you. Likewise, if you got a kick out of Supreme Commander, but wanted to have freedom to explore the fictional setting, rather than play through a fixed campaign, then you’re going to find a lot to like here. Ultimately, whether you’re going to enjoy Sins of a Solar Empire will depend on whether you prefer deep, slow-burning strategy to the fast-paced thrills of a tactical RTS. With its mix-and-match gameplay, Sins is certainly a title out of the ordinary, but very much an acquired taste.

What we said: It’s a quality game, that can’t be denied. Play it with a mate and it’s a lot of fun. The live action clips are so bad you can’t not want to watch them, and the whole experience has that addictive quality that makes you want to play it when you’re not, but it’s a hugely conservative effort. The co-operative campaign is a nice addition, but we’ve been playing RTS games with friends on the same side for years in skirmishes, so this is more evolution than revolution. This is one for the series’ army of fans.

What we said: While each individual stage may remind you of other games, we assure you that the overreaching feel and play is like nothing you’ve ever come across: it’s weird, surprisingly thought-provoking and above all else, fun. Of the hiccups we’ve mentioned, only the difficulty of the Space Stage really narked us – and we hope that’s something that Maxis will address via a patch of some kind. At its best, Spore is wildly innovative; it would be a crying shame if a single defect were to deprive the game of the success it so richly deserves.

What we said: Despite some bugs, no problem proved bad enough to significantly tarnish our experience and on the whole Sports Interactive has tweaked an already brilliant game to make something even better. If you want a high stress virtual job on top of your real one, have hours to burn each day looking at an interactive database, and fancy yourself as the next Alex Ferguson, Football Manager 2009 might be the only game you’ll need until this time next year.

3. World of Warcraft: Wrath of the Lich King, Blizzard

What we said: With the release of Wrath of the Lich King, it’s difficult to see how anyone will loosen World of Warcraft’s stranglehold on the MMO genre. With its spectacular design, dazzling polish and ever-compulsive gameplay, World of Warcraft seems destined to remain the everyman’s pick of PvE-focussed MMO for the foreseeable future, and with the implementation of new PvP mechanics, Blizzard is no doubt looking to tempt back players who jumped ship to Warhammer Online and Age of Conan as well. The competition needs to take note, because the bar just got raised that little bit higher…

What we said: When EA and Crytek announced that Warhead wasn’t a sequel but an expansion there were a few understandable groans of disappointment. After the success of Crysis people wanted a full-on sequel that would move the series forward in the way Crysis built on the foundations laid in the Crytek developed PC Far Cry. It’s fair to say that we didn’t expect an expansion to be this good. Considering you can shop around and pick Warhead up for £15 you’d have to be mad (or a psycho) to overlook it. If you’ve got a modern PC and a longing for some macho man action packed gaming, Warhead is an essential purchase.

What we said: There are games you want everyone to play, just so they can experience what you’ve such a good time with, and Left 4 Dead is one of them. It’s unlike any other game I’ve ever played and demonstrates the true power of cooperative gameplay. It’s worth noting that the experience is somewhat dulled if played alone, but if you’ve got online friends or are happy to play with randoms, Left 4 Dead is a game you simply can’t pass up. Just make sure you’ve worked out what you’d do in a zombie outbreak before you start playing, as you won’t be able to make anything approaching a sane decision with a screaming witch bearing down on you.

Agree? Disagree? What are your picks for best PC games of 2008? Let us know in the comments section below.