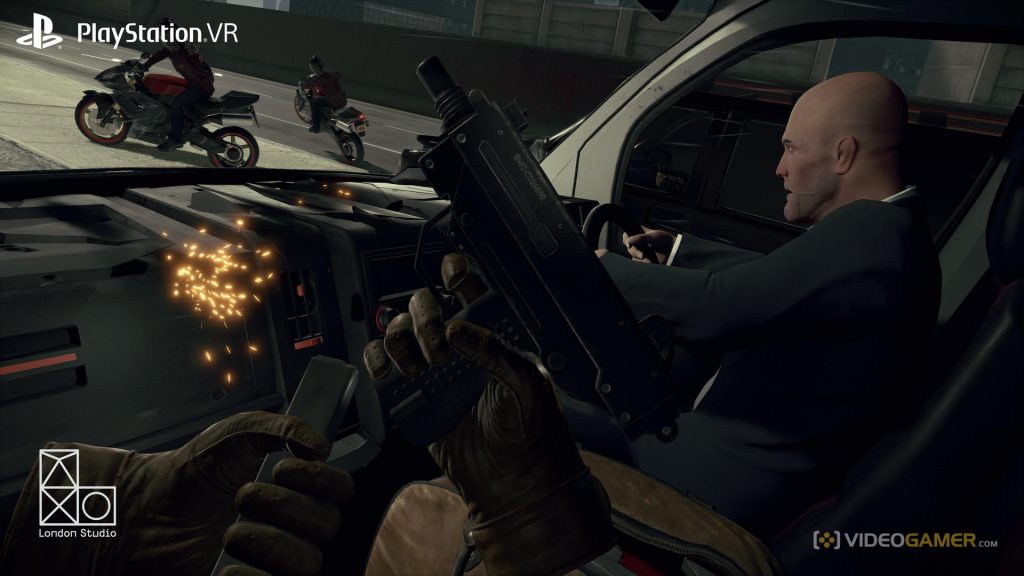 There’s a lot of good stuff in PlayStation VR Worlds: Ocean Descent and its beautiful (albeit mildly unsettling) underwater deep dive; The London Heist and its 30-minute story of a diamond robbery gone wrong; and Scavengers Odyssey, a disorienting (and often nauseating) sci-fi shoot-fest through an alien-infested space station.

But they’re ultimately all just short, micro experiences designed to show off the capabilities of PlayStation VR. Tech demos, in other words. The kind of thing you try once and never return to again, resulting in a disc that really should have been included with the headset. To be frank, I can’t believe it wasn’t.

There’s one mini-game, though, that’s kept me coming back. It’s an actual game, too, rather than an experience, and one I’d wager wasn’t on your radar when it came to PlayStation VR Worlds: Danger Ball.

Danger Ball is fantastic. Truth be told, it’s the sort of thing that by description alone would be easy to dismiss as motion-controlled tat. But it’s so good that (with a little more development) I believe it would be worthy of its own game. Imagine Pong being played from a first-person perspective, but instead of using a controller, you control the bat by moving your head. Now throw in a high-tech virtual stadium, some impressive 3D audio, and futuristic neon colouring, and you’ve got the core concept behind Danger Ball. It’s easy to overlook when positioned alongside gangsters, sharks and aliens, but trust me: it’s a lot more fun than it sounds.

The key is in its simplicity. One of the few games controlled just by using the PSVR headset, the player’s bat moves wherever you look, meaning that returning the ball back at your opponent is as simple as anticipating where it’s heading and looking in that direction. There are some advanced moves, like curve shots (pulled off, as you’d expect, by hitting across the ball with your head) and powerful smash shots, activated by popping your head forward as it makes contact with the bat. Just like Pong, points are scored by hitting the ball past your opponent’s bat. Whoever is first to 5 points wins.

To add another layer of complexity, each of your opponents has a unique ability. One of them is able to clone the ball, while another can spin it back in a tornado-shaped cyclone, making it difficult to predict where it’ll end up. And it can all get pretty manic, too, as rallies go on, balls get faster and your opponents start getting tougher. I still haven’t managed to clear the game’s main 6-round Tournament mode – a blessing, perhaps, given the limited number of modes on offer, but because it’s so much fun, not as frustrating as that may otherwise seem. Sadly, there’s no multiplayer. A missed opportunity if you were to ask me: I can only imagine how intense an online match between two top players would be.

As seems to be the case with many VR titles, though, it’s the sense of depth and scale that makes it. As a standard, non-VR game, I’d struggle to see what something like Danger Ball could offer in 2016, and it’s difficult to appreciate how much fun it is just by seeing it in videos. But in the context of VR, it works, with the ball ricocheting back and forth each length of the court, and the sounds of the stadium buzzing in your ears. It isn’t enough to justify picking up the entire PlayStation VR Worlds package alone, but had it been a cheap, standalone downloadable I’d have been recommending it to everyone in a heartbeat. An addictive and surprisingly fun addition to an otherwise solid but content-light package.