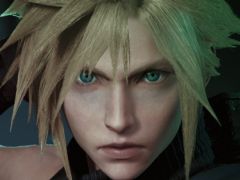 Hitman: 5 other famous people we’d like to see as targets

The genius of this is its simplicity: killing the right person when everyone looks the same. Io has been experimenting with this already: an elusive target in Sapienza is part of a set of identically dressed twins. Which is a bit of a shitter, seeing as you can’t kill the other one without failing the mission. Well, take that idea and multiply the identical targets by a thousand and you’re close. Like in Hitman 2’s St Petersburg mission, you’ll have to use the available intel to set the target apart from the herd: is his or her sword regulation size? Does his or her hair have the right amount of spikes? Do his or her eyes radiate the sort of burning hatred for the existence of carbon-based lifeforms that it could and in fact definitely should?

All good questions. Not only is the target interesting, but the location would be as well. Just imagine how many different costumes you could dress up in to get close to your Cloud. Tifa? Squall? Kane? Lynch? Or….Agent 47 himself, with a set of modified pistols which look safe but…aren’t?

Remember Dream Team? No? Well good, because I’m nicking one of its plotlines, and when you’re doing that you know you’re finished. Anyway, the key to a good Hitman level is a combination of two-parts interesting surroundings and one part detestable target. So what could be better than assassinating Lionel Messi in the middle of a high profile game? You’d have to infiltrate the stadium, get to a vantage point, maybe a corporate box…or the gantry. Disguising yourself as a football commentator, or stadium announcer, or even one of those shit linesmen who don’t actually do anything.

Or, more deliciously, a club physio? The player goes down injured, they’re not getting up. You sprint onto the pitch to give them the magic sponge or ice spray or steroids or whatever, and then..bang. Glorious. Best idea ever.

The person who tells you your train is delayed…again

Perhaps the least deserving victim of the lot (after all, it’s not his fault your stupid fucking useless train is broken again) but look, somewhere, somehow, someone’s gotta pay. And so you’ve got to stalk up and down the carriages looking for the guard or the driver or whoever it is makes these exasperated declarations of mortal loathing, and make them dead.

Problem is, because this is probably set in Britain, the trains themselves are utterly packed, making just getting from carriage to carriage, or breathing, quite difficult, let alone killing Train Person and getting away with it. Well, that’s for you to work out. Personally, I’d disguise myself as a disgruntled mother and barge a massive fucking pram down the walkway like a bloody great weapon.

I’ve been saying for years that E3 should be a map in a Hitman game. After all, it’s got it all: massive floorspace, plenty of civilians for the target to disappear into, private rooms, security guards, VIPs, and games journalists. So: which games journalist would you choose to assassinate? Come on, everyone has one of them that they want to get rid of. I personally have a list of about 25. This could be one of those multi-part missions, where like Sapienza you have to kill the targets AND break an inanimate object. Or maybe you just need to go and play new PES.

Either way, the potential is huge. How will you differentiate between your target and not when they’re all wearing the same clothes? Will you find the interview schedule and pretend to be a developer so you can lead them off to a dark room to kill them? Or will you bore them to death with your talk about being built from the ground up and other nonsense?

Those reality TV people…all of them

Need I say more? No. But I have to, because my editor will not allow me to leave it at that. Anyway, as with the other missions proposed there’s got to be some hook here, above and beyond killing some of the worst people alive. (Yes, it would make it more than five people. I don’t care.) If it was Big Brother related, it would be that you have to get into the house undetected. If it was I’m a Celebrity…perhaps it would be drowning David Haye or David Cameron in a shocking bushtucker trial gone wrong. If it was Love Island, it would be the thought of 47 having to pair up with someone to avoid being booted off the show and missing his chance.

As ever, the potential for absurd nonsense with these targets is high. Eating a kangaroo’s anus so you can get close to David Soul. Getting a spray tan so you don’t get found out in the villa. Pretending to have no brain activity whatsoever in order to infiltrate a conversation in the Big Brother house. Make it happen, Square.