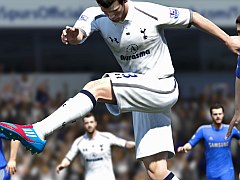 Having spent a lot of time in FIFA 13’s Career Modes, I’ve picked up some useful strategies that should help you fast-track your way to success. Here are some tips to help you both on the field and in the transfer market:

How many times have you seen a big name join a top club and turn out to be a flop? Too many times. That’s why, when you go into the transfer market, you’re going to treat it like an RPG. Instead of thinking “I want to buy X, Y and Z”, think about what type of player you need: do you need a midfield maestro like Paul Scholes? Look for a player with high vision, passing and ball control stats. Want a great defender who can pull goal-line clearances? You need a man with high standing tackle, heading, and interception stats. A poacher who’s always in the right place at the right time? Look for skills in agility, balance and finishing.

As much as these are the players you see on TV every weekend, you’re controlling them, so it ultimately boils down to your ability and the stats they possess. Whatever way you want your team to play, buy the numbers that will best help you achieve that.

You need to focus on building a player that is suited to your position. In the first couple of years, a lot of achievements will unlock just by playing the game, but later on you will need to start catering matches to meet certain requirements. Defensive players aren’t expected to score a hat-trick every game, and equally strikers don’t need to make last-ditch tackles. You can be the Man of the Match in any position – which is something EA has improved greatly in FIFA 13 – so don’t feel forced to play up front every time.

EA has completely reinvigorated the way teams attack in FIFA 13, and in doing so, quicker players have a much greater advantage when it comes to breaking down defences. As a manager, it’s very important you invest in some speedy players both up front and on the wings. Even on higher difficulties, you will be able to sprint beyond defenders to create chances.

Javier Hernandez, Daniel Sturridge, Sergio Aguero: players like these are exceptionally quick, and can get you out of tight spots when you most need it. Pairing quick players with stronger striking partners can be effective, as it gives you more variety in attack.

Naturally, it makes sense that if fast forwards are the key to getting behind defences, you should try and counter that with at least one quick centre-half, and two fast full-backs. In my opening season as Manchester United’s manager, I immediately ran into trouble with Ferdinand and Vidic, two reasonably slow players, at the heart of my defence. I was forced to play a much deeper game, meaning counter-attacking was much slower, and I had fewer men to attack with. By replacing Ferdinand with the much faster Chris Smalling, any through passes that Vidic couldn’t keep up with were intercepted by Smalling. Again, always be thinking about the stats.

It’s a long season, particularly if you find yourself on a couple of cup runs, so it’s vital you have a decent-sized squad, because there will always be an injury or two along the way. The best managers have said they try to have at least two first-team standard players for every position, so that gives you an idea of what you need.

Make sure you rotate your squad against lesser opponents and in the Capital One Cup, otherwise you’ll soon find transfer requests being handed in left, right and centre. This is especially true if you promise the world to players you buy. A player will quickly demand more football if dropped for a couple of games if you promised he will be a “Crucial” part of your team at the signing stage.

Having players who can play in multiple positions is always a bonus, as they can cover for sudden injuries and be kept happy by playing regularly, even out of position.

Investing in youth is equally important, and it’s hidden deep in the game’s menus. Under ‘Manager’s Office’, there is a ‘Youth Academy’ section, where you can hire up to three scouts, with the very best costing millions to snag. These scouts will scour the globe and bring the best teenage talent to your club. If you’re on a tight budget, this is a great way to develop great players for later seasons.

Be warned, if you hire a poor scout, their assessments are very broad, and their picks may not turn out to be the beacon of hope you’re looking for. As these young players develop in your academy, you’ll get a better idea of how good they could become, and can decide to give them a contract or release them once they turn 16.

I recommend sending these scouted players out on a couple of season-long loans once they sign to develop them further, as players often come on leaps and bounds with a full season of first-team football under their belts.

Don’t sprint onto your first touch

FIFA 13’s new Dynamic First Touch system means that players are liable to have a bad touch from time-to-time and give the ball away. The poorer your first touch statistic, the more likely this is to happen. Weather, pressure from defenders, and the pass itself also play a part in your first touch, and it’s vitally important you do everything you can to make your first touch stick.

The first touch is more likely to be poor if you are sprinting, so take your finger off the trigger just as you get to the ball. Using the ‘trap’ controls (LB/LT, L1/L2), you’re less likely to get tackled, which is very important when you are close to the opponent’s penalty box.

The first touch is also particularly inconsistent in the rain, so be aware of sprinting in and around the penalty areas with the ball.

Players using Tactical Defending quickly come unstuck when they hammer the tackle button and drag defenders out of position. You must be absolutely confident your player can win a tackle, because if you miss your opponent will be five yards ahead before your defender can even move again. Referees can be particularly harsh with the new push/pull system too, and are quick to book you should you hold a player back, even after playing the advantage.

By constantly chasing the ball and tackling as soon as you get close, your defence is all over the place and teams will pick you apart online and on higher difficulties. It’s far more effective to jockey opponents out towards the wings, and only commit to a tackle when an opponent takes a heavy touch, or you have another defender near you who can recover should you miss.

One useful tactic is to call a second AI defender to press the ball, while you jockey the ball carrier. The AI can be far more effective at tackling, and on the occasions that the attacker beats your AI defender, you’re right there to nick the ball. Use slide tackles sparingly, as it’s very difficult to both win the ball and keep it, more often than not the attacker will quickly regain possession as you try to get to your feet.

Possession is the key to victory

One of the most important things to remember is that your opponent cannot score for as long as you have the ball – unless, somehow, you manage to pull off an amazing own goal. Don’t force an attack when you don’t have the numbers to do so, be patient with the ball. If an attack breaks down, feel free to pass it to your back four and start again. By doing so, your opponents will press higher up the pitch, giving you more space between their midfield and defence to break.

If there’s nobody to pass to, tapping LB/L1 will trigger nearby teammates to make off-the-ball runs, creating both passing opportunities and space to run into. This is great for dragging defenders out of position and bringing your full-backs forward.

It is OK to lose

As much as it hurts to lose a game of football, every team falls short from time to time. Even Arsenal’s infamous unbeaten season included a few draws, so don’t feel you have to rage quit if you get hammered or suffer a shock loss to lower league minnows, upsets happen.

The season can feel much longer if you have to replay the same match over-and-over again to try and get the win – so resist the urge! It’s a marathon, not a sprint.