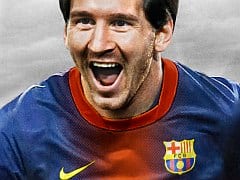 Despite producing an outstanding game last year, FIFA 12 unravelled after a year of play. Much like the famous Panenka penalty style, a consistent amount of similar chips will eventually get found out. Last year FIFA imitated the physicality of a débutante Alex Oxlade-Chamberlain: strong, full of potential and unfinished. But with a year of extra experience, FIFA 13 has grown a set of broad shoulders and impressive touch that indicates a special future.

Last year’s most contentious offering, Tactical Defending, had the tendency to feel a little unfair on those trying to retrieve the ball. A quick match online would expose the system’s weaknesses, allowing speedsters such as Gabriel Agbonlahor or Theo Walcott to overcome the presence of defensive stalwarts by picking the ball up and running. Physical strength was hardly accounted for, placing an unfair advantage at the feet of those attacking.

In FIFA 13, defenders now have the right tools to halt any kind of offensive flair. Positioning, power and momentum can bring the quickest of sprinters to a standstill, or if you’re overzealous, tumbling to the ground.

England fans will remember the torrid time John Terry suffered against Zlatan Ibrahimovic in Euro 2012. If this situation appears in FIFA 13, a shoulder barge or tug of the shirt could eliminate that danger. When defenders succumb to the difficulty of standing in the right place, such tactics must be used to regain control. It’s underhand, cynical and unsportsmanlike, but that’s football.

Physicality is also improved. A year testing the Player Impact System unearthed some irritating habits, including bones that would snap out of position without injury, superhuman strength in each player’s upper body, and other hilarious gaffs that underlined the fact you weren’t watching a Sky Sports broadcast.

But in FIFA 13, players bounce off each other according to weight and stature. You won’t see Paul Scholes flooring Yaya Toure in a clash of brute strength, but he could escape the Ivorian’s clutches if his movement and distribution is on point. Battles across the pitch are unpredictable. Mistimed jumps might result in you nicking an unlikely ball, or send your player hurtling towards the turf if someone else makes contact on the way down.

Much of this is emphasised by the movement of the ball. Expect to see superstars like Xavi and Iniesta receiving each pass with expert control, turning quickly, and then moving play on with a precise swipe of the boot; in past iterations any player could stop the ball dead without the slightest hint of trouble. But such slickness is a luxury in FIFA 13, with the ball moving across the field in a far less predictable fashion than we’ve become accustomed to. For the first time ever, it feels like every individual touch has an impact on the game.

This comes to fruition even further with Complete Dribbling. Similar to the control system in FIFA Street, you are now granted a wider scope of options when in possession. Skilled dribblers can perform tricks with great speed; the tornado legs of Ronaldo may hypnotise before a burst of pace opens up space.

One of the most effective uses of Complete Dribbling is the ability to turn away from pressure. Like in PES 2013, calm players can use their body shape to edge away from danger. In Konami’s resurgent game this technique is essential. Although it’s hugely useful here, snappier passing allows possession to be kept just as easily. All in all, EA would have also done well to include a manual trapping system akin to its competitor.

Minor alterations continue into this year’s Manager Mode. Whether you decide to suit up and take the reigns at a club, or head onto the field as a reserve, you’ll come across plenty of interesting differences. Such as the transfer markets, which are now more competitive than ever. Players now consider their own situation before moving to a new team, and might need reassurance they are in your plans for the future.

Newspaper speculation could unsettle individuals with false rumours, leading to unrest at the entire club. Ridiculous injuries also have a habit of cropping up: in the first few weeks of my opening season Sergio Aguero spent time on the sideline after crashing his golf cart, and Tim Cahill was ruled out after dropping a household item on his foot. Similar occurrences have happened in real life, so it’s good to see EA providing a jovial wink towards the bizarre side of the sport.

A long overdue feature now allows you to get international jobs, too. While it’s unlikely Spain or Brazil will come calling early on, expect a host of European minnows to be interested in the opening stages of your career.

Ultimate Team has also seen a slight makeover. Single-player seasons take the emphasis away from cup competitions. Your first few matches will be spent trying to accumulate points from a number of lesser known clubs. Earn enough within the allotted amount of games and a promotion is in order. Each league match manages to have a sense of meaning about them, something cup variants often lack.

One thing still missing from Ultimate Team is a sense of history. Many players will return to their clubs without any reminder of what they’ve achieved before. EA should highlight the team’s all-time record, top scorers, largest transfer fees and a host of other statistics that hardcore players would thrive off. After spending so much time building a squad the year before, it is disappointing to see your previous records lost in the annual transition.

Away from virtual points and card collections, the Matchday experience is an excellent inclusion. Before starting a fixture you can decide if you want real-world form to be considered. Right now the likes of Robin van Persie and Lionel Messi play with improved stats based on the plethora of goals they’ve recently scored. Those who’re playing badly will also be tweaked, meaning Southampton fans could face as much of an uphill struggle on the virtual pitch as they do in the Premier League. Commentary also coincides with what’s happening, although this is reduced to stock phrases rather than chatter on actual events.

Talking of chatter, EA’s decision to add Kinect is a useful one. Simple tasks become even easier once commands are learnt. Substitutions can be made, formations and mentality altered, plus camera angles can be switched if you fancy a different approach. Various accents can also be recognised. Alongside the standard sound you’ll have the choice to speak like a Scouser, Manc, or cockney. Finally you can bring Mi’ckey Owen on and get away with it.

As ever, presentation is suitably lustrous. EA’s strong partnership with Sky Sports continues with plenty of tiny additions: Martin Tyler might go around the grounds during your match to find out a scoreline, or Geoff Shreeves could provide an update on an injury. Results are read out after each round of fixtures to ensure you don’t miss what your rivals are up to.

FIFA 13 is definitely an improvement on its predecessor. The additions from last year have been worked on and sit far more comfortably this time. Developed physicality and complete unpredictability mature proceedings on the pitch. Thoughtful additions to most game modes ensure players have plenty to look forward to. EA had to sit and watch as PES 2013 lapped up critical plaudits earlier this week, so it’s only fitting FIFA 13 arrives in generation-defining form.

FIFA 13 is definitely an improvement on its predecessor.
9 Most game modes have received worthwhile additions Each touch can change the game Better physicality and passing Ultimate Team could use an overhaul