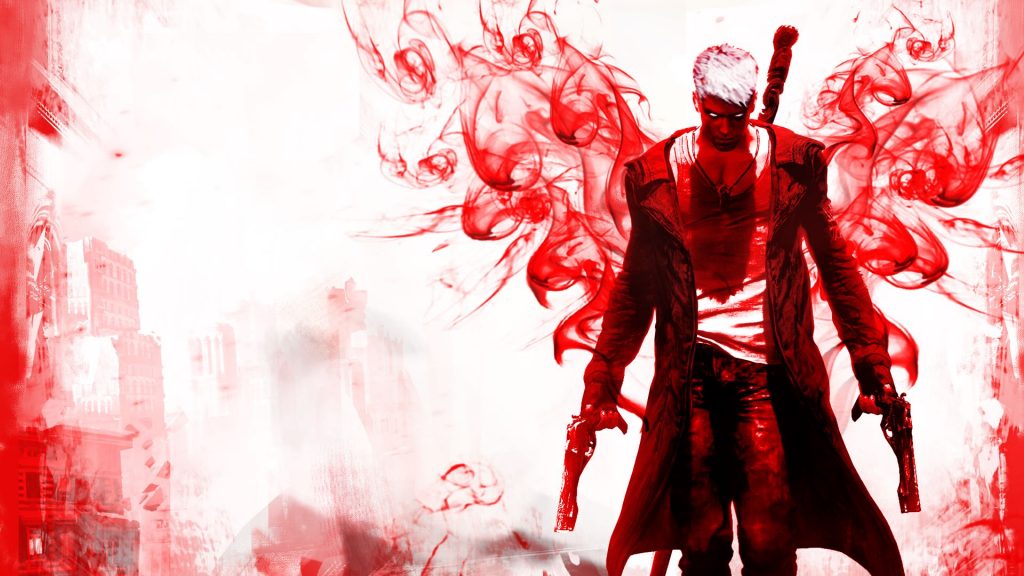 DmC is perfect to play after Devil May Cry 5

Dirty. Cruel. Brutal. Anarchic. Savage. For any budding cynics who have read the work of Thomas Hobbes, the rhythm and timbre of these words might sound familiar. It was Hobbes, afterall, who described the life of man as ‘solitary, poor, nasty, brutish, and short.’ But while similar to Hobbes, these descriptors are, in fact, the rungs of the rating scale in DmC: Devil May Cry, which critiques the creativity of your violence. Any relation they bare to the state of the human race is – presumably – purely coincidental.

Then again, maybe not. To play DmC is to be planted in earthly dirt. Citizens suck up energy drinks, the secret ingredient of which has been milked from the pap of a succubus, in order to keep them docile. The city is a bog of debt, with adverts for bank loans that mortgage the soul (666% interest, a squint at the small print reveals). It’s a place where the divine is clawed at by the dingy, where the angels are scantily clad and swing on the poles of a nightclub. And where the hero dulls himself with drink. What a wonderful, distorted reflection of the Devil May Cry series – a tipped hat and a raised finger.

Once you’ve finished Devil May Cry 5, you owe it yourself to venture back to DmC. For one thing, it’s illuminating to see the similarities at play: the camera, the combat, and the world – tilted toward the everyday. Now that Devil May Cry 5 has returned the series to its older mythology and wafted DmC up onto a cloud of its own canon, it makes for an intriguing ‘what-if?’ one-shot. Those people whose tastes were offended by Ninja Theory’s irreverence for Capcom’s traditions can, perhaps, now lay a cool flannel on their foreheads and dare to dream. 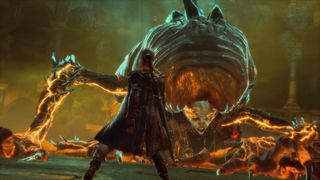 If not, there is another great reason to play DmC: for the laughs. It all seethes with nasty little bits of satire; at one point, there is a scene, in the spires of an infernal office building, in which one character says, ‘This is the finance wing. Those who work here are barely human any more. They have been corrupted beyond recognition.’ Zing! Elsewhere, there are nods to John Carpenter’s They Live, as adverts, seen through the lens of the demon realm, reveal their true nature; ‘home loans for you’ becomes ‘homeless for you,’ while billboards display more blunt messages like ‘obesity,’ ‘stupidity,’ and ‘consume,’ and, later on, when demonic tempers run hot, simply ‘Fuck You Dante.’

Indeed, it’s ironic that, in DmC’s mythology, hero Dante has foregone his human half (Ninja Theory recast Dante’s mother as an angel, rather than a human), because the game has its nose in our world just as much as what lies above or beneath. It grounds the fantasy in urban decay, and there’s a sort of spray paint poetry in the way the worlds mesh. The scene in which Dante’s brother, Vergil, explains to him the nature of things (‘There have always been angels; there have always been demons. And they’ve always been at war.’) is illustrated with playground graffiti, like holy frescoes served up street style.

You can feel the touch of screenwriter Alex Garland, who co-wrote the game with Tameem Antoniades, in the scraping together of these disparate worlds. Take the island of The Beach, for instance, a dream of escape bubbling up from the clamour of the outside world, its edges soaked in surf. Or the way that London is transformed, in 28 Days Later, into a lonely, alien place just by its daydream lighting and deserted streets. There’s much of the movie-coloured in DmC. Dante walks in a spectral realm, called Limbo; here, the ground folds and swings skywards, like the streets in Inception. While another character, Phineas – who has a head that’s half mechanical – seems to have broken free from the brain of Guillermo del Toro. 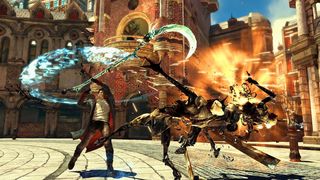 The saddest thing about DmC failing to win the hearts of fans is that it’s those hearts it took aim for. The benefit of a refreshed vision is that, while it may bring in new players, it can be ripe with references for the initiated. Hence a slew of winks and nudges: the fiery trinity of orbs in the sky, marking the presence of Mundus since the first Devil May Cry; the painting of Dante’s mother holding a blue rose, the name of Nero's gun, introduced in Devil May Cry 4; and the platinum wig that lands on Dante’s newly brunetted head after an explosion, a nod to the Dante of old.

Moreover, there is dramatic irony to be squeezed from the story for those in the know. The plot is wayward and ludicrous, but it works by fashioning itself after Dante’s sword: slicing through the outlandish mess with enough force that it can’t be slowed down. It may go by in a blur, but there is plenty of room for drama. The decision to make Vergil an ally is an ingenious trick. For those that know of the sibling scrap that fuels these games, there’s a low-level tension that hums as the pair join forces; you wonder not if but when it will all unravel. (And the game never loses its cool; I couldn’t help but smirk when it mocked the melodrama by naming one of its more irritating demons ‘Pathos.’)

All of which is to ignore the combat, a blizzard of bursting slashes that remains snake-quick and satisfying. Ninja Theory had the bright idea to increase Dante’s speed with each rank of the style meter he reached, pressing you toward evermore feverish combos as you fight. It seems more alive to raw power than its predecessors, with Dante’s rangy limbs dizzy and staggering, as if surprised at their own strength. It’s easy to get lost in; I started it on Friday,  and my weekend went by in a blink. If you’ve reached the end of Devil May Cry 5 and you’re hungry for more, then go back to DmC and feel renewed. In short, you could scrap everything I’ve written here and settle for the following scale. Deranged. Captivating. Brilliant. Acerbic. Surreal. 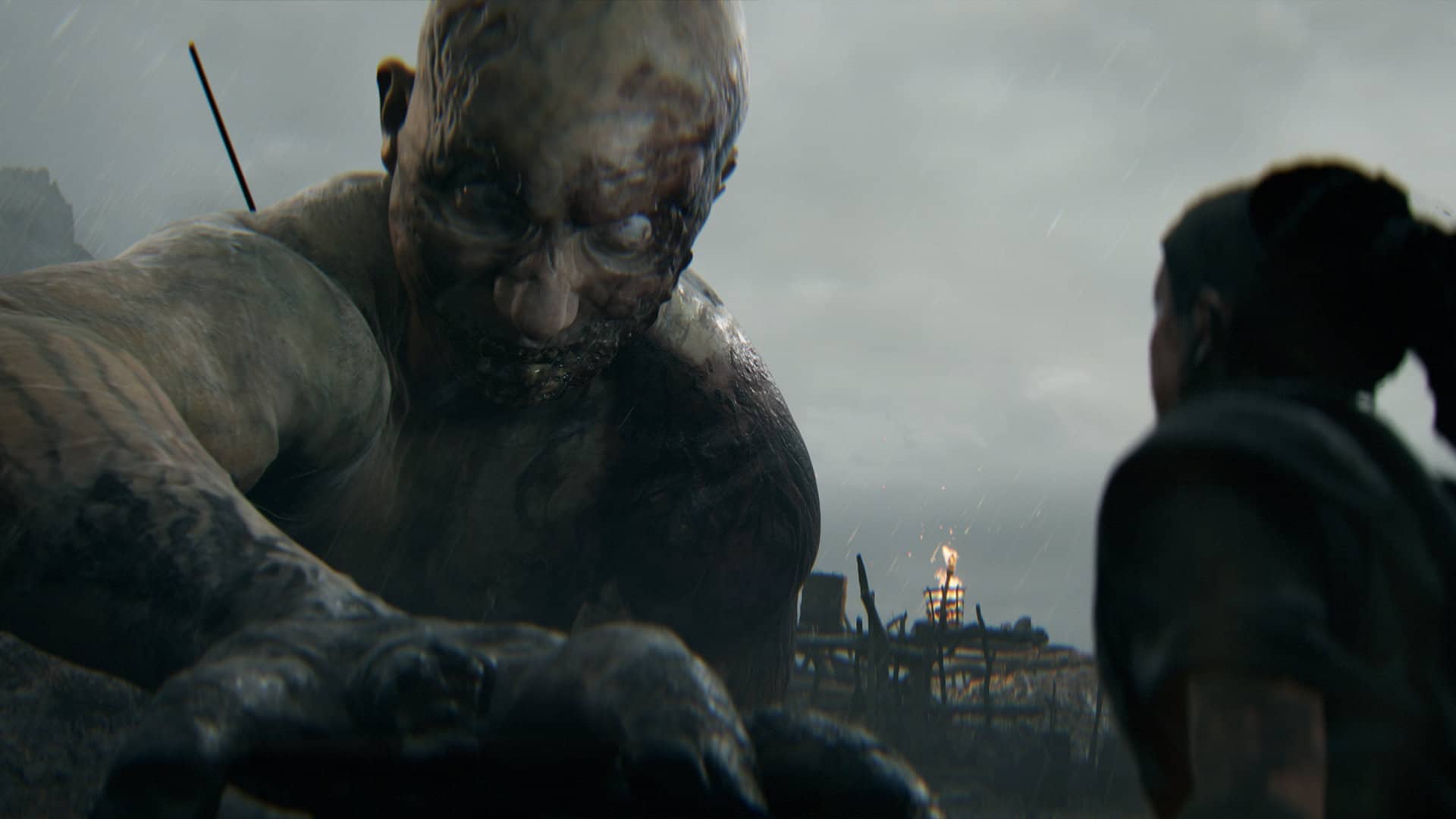