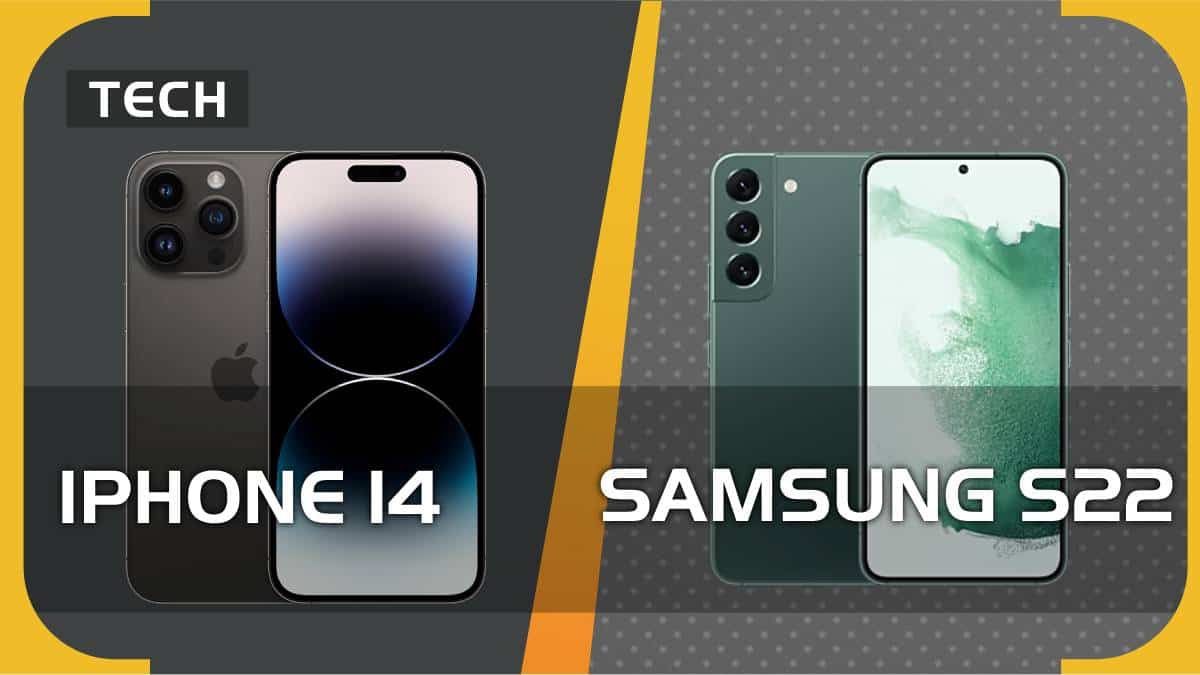 As two of the most popular phones out now, many people are comparing the iPhone 14 vs Samsung S22. We’re breaking down all the important information right here.

The iPhone 14 was released as Apple’s latest flagship phone towards the end of 2022. Despite being on the lower end of the iPhone 14 range compared to the iPhone 14 Plus, Pro and Pro Max, it far outperforms even the best mid-range phones. This is thanks to its high specs across the board.

The Samsung S22 was released a few months earlier in February of 2022. It too boasts impressive specs in all areas and serves as the flagship phone for Samsung. It has even enjoyed a recent price drop, making buying it all the more appealing.

As the two flagship models for two of the most popular phone manufacturers, the choice between the iPhone 14 and the Samsung S22 is a choice many consumers will be making, especially considering as they’re both some of the best gaming phones.

To ensure sure you get the one that is right for you we’re going to be going over all the key specs, features and design elements. We’ll then give our opinion on value for money to make sure you are as informed as possible.

So let the comparison begin! Here are the key differences and similarities between the iPhone 14 and Samsung S22.

These phones boast high specs across the board, though there are a few key differences which we’ll be breaking down here.

Let’s start with the displays. Both feature bright and dynamic OLED displays, which allow for deep blacks and vibrant whites. Samsung does just edge the iPhone for brightness coming in at 1,300 nits versus the iPhone 14’s 1,200. In most usage scenarios this won’t be that noticeable, however.

It’s a similar story with the resolution, though here it is the iPhone 14 that comes out on top. Despite identical screen sizes the iPhone 14 packs in plenty more pixels 2532 by 1770 to be precise. The S22’s screen still looks sharp and detailed, but for smaller text the reduced 2340 x 1080p resolution is felt.

As for refresh rates the S22 is superior in two regards. Not only is its maximum refresh rate double that of the iPhone, 120Hz versus 60Hz, but it is also variable, a feature the Apple saves for its Pro range. This means the S22 can go up to a super smooth 120fps when gaming, then drop down to as low as 48Hz when convenient. This can save on battery.

The battery is a good place to turn our attention to next. Despite having the larger size of the two, the Samsung S22 actually performs slightly worse here, in part due to differences between how iOS and Android operate.

Another factor is the CPU. It came as a disappointment to some that Apple didn’t upgrade the A15 Bionic chip that comes with both the iPhone 13, but despite this, it is still more powerful than the one found in the S22. That said both are very capable of high-end mobile gaming.

We’ve already discussed the variable refresh rate of the Samsung S22. As for other unique features of these phones, they mainly present themselves through their high-tech rear cameras.

Both phones have identical stats for the two front cameras, though Samsung has the additional feature of a 3rd telephoto lens capable of 3x optical zoom. The iPhone 14 is forced to rely entirely on digital zoom meanwhile.

However, Apple has the new Photonic Engine a feature that assists with optimisation and low-light picture taking. It also carries a superior sensor. The upshot of this is that the pictures on the iPhone 14 do look ever so slightly better unless you are having to zoom in on your subject.

Samsung also benefits from two features which are entirely lacking on the iPhone 14, a fingerprint scanner and a sim tray. The lack of a fingerprint reader is overcome by an impressively fast and accurate face unlock system, though it would have been nice to have the option for either like we do on the S22.

Apple also did away with the Sim card to focus entirely on eSim technology. This system is more convenient though it will come as a blow to international travellers who find themselves in a country where eSim technology has not been fully incorporated.

Both the iPhone 14 and the Samsung S22 look markedly similar to the phones which came before them. The iPhone, for example, has the exact same overall shape as well as an identical aluminium frame and glass exterior as the iPhone 13.

It also has the same front camera notch, one that takes up a fair amount of room at the top of the screen. The S22 lacks this, featuring a more subtle cut-out camera hole, giving you more screen real estate.

In terms of durability, both phones have an impressive IP68 certification, though the iPhone’s front glass is slightly tougher, being made from a specialised ceramic glass, while the S22 comes with the more common Gorilla Glas Victus+.

Overall, both phones look sleek and stylish, whilst still being practical and durable making it hard to separate them in terms of design.

It’s a different story out the US, however, where Samsung manages to undercut all models of the iPhone 14 in terms of price, to quite a significant extent as well. If we compare the standard 128GB models for the UK we see that the iPhone costs £849, while the Samsung S22 is £80 cheaper at £769.

This large price difference extends to both the larger memory sizes as well as other countries such as Australia.

Which one should you go for?

Overall little can separate these phones. Both are incredibly high-end and high-performance flagship smartphones, each having its own strengths and weaknesses in comparison to the other.

The iPhone 14 has a better camera in most settings but falls short when it comes to optical zoom. It also has the more powerful processor. However, this is most noticeable when playing high-end mobile games, an activity in which the Samsung S22’s superior refresh rate is also more felt.

In the end, these phones are similar enough that your preference for operating system is enough to base your decision on. If you prefer the sleek and simplistic look of the iOS or are even just more used to it, it makes sense to go for the iPhone 14. The same can be said for the S22 in regards to the Android OS.

If you are buying out of the US this does change slightly, with the lower price of the Samsung S22 making it the overall more appealing choice for those who are budget conscious.

Is iPhone 15 coming out?

There will be an iPhone 15 eventually, though not till much later in 2023, so for many, it is not worth waiting around for.

What’s the difference between S22 and S22 Ultra?

Both are similar phones though the S22 Ultra has some higher specs, such as 12GB RAM and storage options up to a huge 1TB.

The S23 is coming out, and while it hasn’t officially been announced yet, we’re expecting it in Q1 2023.