We’ve got to the point that several successive gaming generations have grown up and started spawning, and for many sharing their favourite hobby with said spawn presents a problem. So if you’re one of those people who asks questions of gaming podcasts like ‘I want to play games with my young kids, but not enough to trade in my PS4 for a Nintendo console, what games are there that are suitable?’ then please accept Yonder: The Cloud Catcher Chronicles as a new answer.

Yonder is somewhere between a kind of 3D Stardew Valley and My First Skyrim, with a dash of Breath of the Wild Ages 4 and Up Playmobil set. It’s set in Gemea, a soothingly lovely and usefully compact open world where nothing dies and there’s no violence, just vaguely threatening dark clouds of ‘Murk’ that bar your path occasionally. These you can clear with the help of little sprites that you find dotted around the map, hidden at shrines that require an offering of two pairs of sunglasses, or in a swampy crossroad awaiting some nice-smelling flowers.

Even the character customisation, which is basic on the starting screen and is mostly carried out by adding new things to your person as you adventure, has a childlike simplicity of logic to it. I found a beard, I wanted to wear the beard, so my avatar has a great big bushy beard. Later, she found a rainbow hair dye, and now she has a rainbow-coloured bushy beard.

While you are, notionally, supposed to be closing up the sky and getting rid of the Murk altogether, you can find yourself happily diverted in a number of directions. You can build a farm, with room for animals who may produce, for example, milk, which you can make into cheese in the right circumstances (the animals in Yonder are mostly fluffier versions of real life animals, and will follow you home if you feed them their favourite treats; I repurposed almost my entire smallholding as a fox retreat). You can put your energies into fishing, or into a number of different crafts (including the usuals like carpentry and construction).

You might, while you’re on a walk, find a small loaf-shaped cat, and discover that cats are in fact a collectible in this game. You might find a woman who has lost her pet Groffles (the Gemean equivalent of cows) and asks you to track them down, for which labour you receive a giant bow to pin in your hair. The messageboards in the various towns offer rewards for sourcing different items. In fact the entire currency in Gemea is based on trade, so even more time can vanish into crafting things in a deceptively deep system that expands as you learn more.

Much of Gemea can surprise you, in fact, because when you first load it up you think it’s going to be a simple kiddy game, and then you start getting tools to chop down trees and collect wood, and then you start mining minerals and cracking rocks, and building bridges… Because there’s no fail state, it’s a game that children can enjoy, but it’s got depth for adults too — like how panto employs an occasional double entendre as a thank you to the parents for showing up.

That being said, Yonder has literally no peril, not even Mild Peril, or even Scary Moments as per BBFC rulings. The most distressing thing likely to happen is if you fall in water that’s too deep you get reloaded onto the shoreline, so there’s a ceiling on how long you can play before, perhaps, something with more action sings a siren song. Most of the time you’re walking around and stumbling across nice little happenstances in the environment, which ranges from dry desert, to sunny grasslands, to snowy mountaintop. You can discover dozens of quests and tasks, though unfortunately keeping track of everything is a bit of a chore.

The quest log is folded in with your magical compass which points a beam of light in the necessary direction, but it has an unfortunate habit of setting your active quest as the one you last picked up. Every time you talk to someone you have to stop and reset back to what you actually want to do. Likewise, some of the inventory systems take time to figure out, especially things like equipping and unequipping clothes (or rainbow beards).

Despite these niggles, Yonder is obviously a fantastic game for adults to play with their children, and for slightly older children to be allowed to play unsupervised. Even for adults it’s surprisingly beautiful, and a soothing breath of anxiety-calming non-violence. But the older you get, the less mileage you might receive from Gemea. 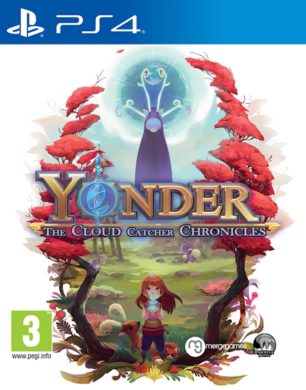