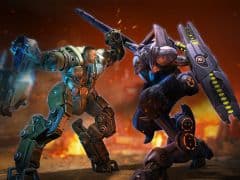 Enemy Unknown’s replay value wasn’t evident until you started playing Iron Man, a mode which would cruelly wipe you out and force you to start a new game because of it. Instead of resenting the difficulty, you’d secretly treasure the stories of these failures – latching on to the moment where your best soldier died, or the horror of being sadly informed that Asia was under alien control. Enemy Unknown’s replay value expired when the game became a solvable puzzle – a set of clear challenges with an optimal route. As players we learned how to beat the system. Firaxis isn’t happy to let that slide.

Enemy Within knows how you play XCOM, and it isn’t going to let you do that anymore. Keep your snipers alone at the back of the map, and invisible squid robots will strangle them to death. Edge forward slowly using overwatch for protection, and you’ll fail to collect MELD canisters before they expire, limiting your capacity to upgrade troops with the new features you’ll need to survive.

47 new maps and tweaks to alien AI and grouping make ground missions far less predictable, but it’s this scope for detailed customisation that makes the expansion truly amazing. New equipment, gene-mod upgrades, and the ability to ‘Robocop’ your troops into MECs create vastly superior scope for specialisation, but tiny additions like flashbang grenades and special ammo designed for close-range combat add options to the earliest stages of the game.

These additional toys aren’t worth Enemy Within’s asking cost, but the implications of their inclusion are. This is an XCOM refresh – resetting the rules of the game you once knew, and encouraging you to play it in ways you’d never tried to. In my mind I’ve merely dabbled with these changes, and still have so many ideas I’d like to try. I’ve played it for 27 hours.

One of the best games of 2012 is back, and it might be the best game of 2013.
9 Makes XCOM feel unknown again. Genemods and MECs are unbelievably cool. Improves the game’s balance. Makes cheeky tactics obsolete.