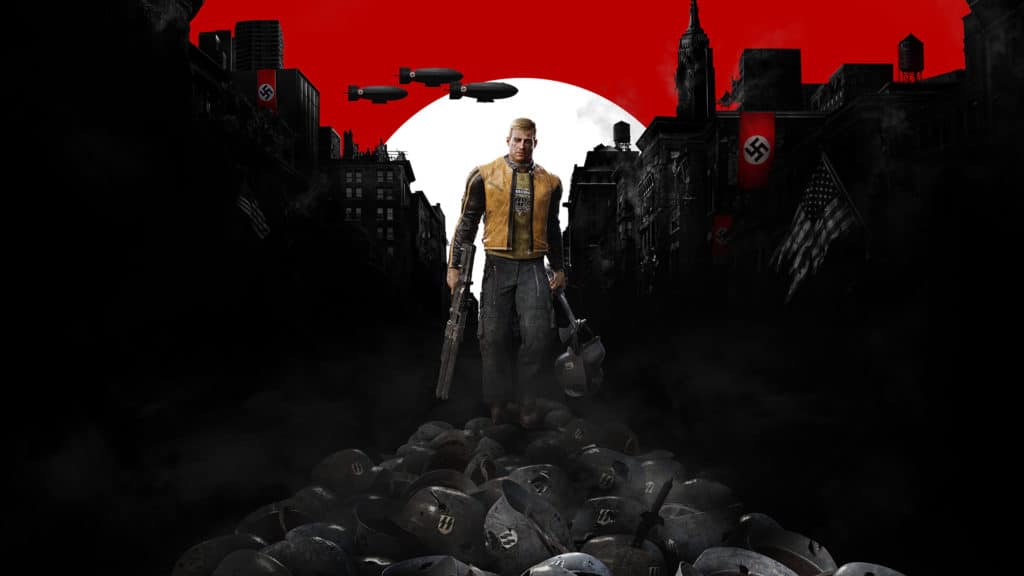 The words of Dee Snider’s semi-rebellious teenage anthem have rarely felt more emotive than they do at the end of Wolfenstein II: The New Colossus. The original version of We’re Not Gonna Take It is a light and fluffy number: the soundtrack to an argument about vegetables at the dinner table rather than the beginning of a debate on the political landscape. After the bloodshed of the first-person shooter is over, a metalcore rendition of the glam rock hit plays out, and summarises the thoughts of many in 2017, as well as the resistance in 1960s America. And there has to be a resistance: the Nazis had a far more successful World War II in this timeline than in ours.

Wolfenstein 2 picks up right after the events of the first game, with former Allied forces soldier B.J. Blazkowicz and his fellow freedom fighters still looking to spill the blood of those persecuting the American people, abolishing the world of Nazi rule in the process. This is over 10 years after U.S.A.’s concession, though, and some Americans are happy under German rule. While taking a stroll through Roswell, New Mexico, you’ll see youngsters queuing up for propaganda movies at their nearby cinema, Ku Klux Klan members looking to impress Nazi soldiers with their pronunciation of German words, and locals whooping and hollering at a parade celebrating the day the war was won – not lost. Of course, you also come across others who recognise you, not as the awful Terror Billy that the Nazis claim you to be, but as the man who is America’s last hope. While occasionally faltering, Wolfenstein II mostly steers clear of nationalist ideology, because Blazkowicz and his buddies’ aim is to free the entire world from the oligarchy, not just the good ol’ U.S. of A. And that’s an important distinction to make, because of those who have welcomed the Third Reich into The Land of the Free, like those Roswell residents mentioned as well as B.J.’s dad.

The New Colossus delves deeper into Blazkowicz’s past, fleshing out the character who, prior to MachineGames’ reboot, was purely a vessel for violence. While oppression would be seen as explanation enough for many, there’s more to B.J.’s hatred of the Führer’s beliefs. Developer MachineGames explores his childhood and the relationships he had with both his parents, including a powerful opening scene that outlines his father’s distorted views on race, religion and sex, on top of some disturbing moments involving B.J.’s Jewish mother. Wolfenstein’s quieter sections are what see it stand out from similar in the genre. While you could still appreciate the frenetic action without them, the carnage holds more weight if you break it up with heartbreaking scenes exploring B.J.’s upbringing, and moments of tension involving the likes of the returning General Engel.

The best villains are those who truly believe in their goal. They aren’t evil in their own minds, because what they’re doing is right, morphing the truth into whatever they want. Through spot-on writing General Irene Engel is cemented as one of the most deplorable, sadistic characters in recent video game history, and made to come alive via the sublimely uncomfortable, and antagonistic, portrayal by actress Nina Franoszek. Making the Nazis look untoward might be played down as something quite simple by some, but their depiction here expertly straddles a fine line between brutal and theatrical. To be fair, that doesn’t just apply to the baddies.

Aboard your U-Boat base you’re able to walk around and converse with fellow guerrillas, or just observe them and see what they get up to in between missions. Like most housemates in an enclosed space, there are tiffs about both minor and major things, flings that result in aggrieved parties, and a game of chess that’s interrupted by a man’s excitement at a working toilet. The safety of B.J.’s crew feels as important as the liberation of the American people for the Steve Rogers-like action hero, because as much as they each fill a vital role in the team, they’re his dysfunctional family. The new characters are an utter delight and flawed enough that they fit right into the land of misfit toys, but the focus on the likes of Super Spesh, Grace, and Sigrun does almost make input from some of the returning members of the Kreisau Circle a bit redundant. Regardless, whether they provided some much needed levity, or a poignant tale, spending time with them is a joy. Mowing down the enemy evokes a similar feeling, funnily enough.

Wolfenstein 2 is a fast, gory first-person shooter that’s here to satiate your urge for devastation. In combat, you’re a burly man whose purpose is to shut down the Nazi operation – sending a few to their eternal resting place is a bonus. However, they’re not too keen on you either, and have the arsenal to show you as much. Even on the second difficulty option, you may find yourself face down in the dirt a decent chunk of the time, after some destructive German engineering is done with you. There are occasions where you’ll think you have everything under control, downing Swastika-saluting men left, right and centre, only to be murdered from the back quicker than you can say ‘auf wiedersehen, pet.’ Progression can really slow down in areas where it’s not clear what exactly keeps killing you, and from where. Of course, you can go back to the drawing board and approach the situation differently.

Wolfenstein II: The New Colossus is at its best when it’s chaotic. Going through Manhattan’s large open areas, or a clinical underground facility when you’re legging it around the place with a powerful shotgun, is magnificent. Better yet, stick a futuristic weapon in the other hand that vaporizes your adversaries with one shot and you have the tools for a rollicking good time. Dual-wielding sacrifices accuracy for mayhem most of the time, but can also help the stealthier players react quickly to a situation going awry with an automatic rifle at the ready, as well as your pistol that you’ve upgraded with a silencer. You’re allowed to play as you want, with stealth takedowns a more than acceptable method when murdering Nazis. You’re encouraged to try different styles through the perk system.

Rather than have you messing about with a skill tree and taking you away from the blistering gunplay, you upgrade your B.J. by unleashing hell in a variety of ways. Perks are gained by completing a set number of challenges: burn so many Nazis and you’ll take less of a hurting from diesel fuelled weaponry, for example. Rack up enough headshots and you’ll do more damage while aiming down sight, perform a certain number of combat takedowns and your health will regenerate more quickly over time; quickly kill commanders before they set off the alarm and your suppressed weapons will pack a more powerful punch. The New Colossus is your playground to attack as you see fit, but MachineGames does want you to have fun by trying out everything at your disposal. And that makes sense: it’s a hell of a playground that’s been crafted with care. Journals and letters give you a clearer picture of where America is at this tumultuous point, with folks falling either side of the divide. It’s quite harrowing to walk around familiar sites and see what they’ve become in this dark timeline.

Wolfenstein II: The New Colossus can jump from a sorrowful tale to a fantastic gag involving any combination of the excellent cast, and back again. General Engel’s rhetoric is blood-boiling, yet the exact motivation you need before a gun is planted in your hand and you’re told to go wild, while the ferocious soundtrack plays over the top. It’s a masterfully done sequel that provides some catharsis for those not looking to take it in 2017 anymore.

Available on: PlayStation 4 [reviewed on], PC, Xbox One, Switch

Wolfenstein II: The New Colossus jumps from breakneck bloodshed, to humour involving your endearing crew, with aplomb; a masterfully done sequel.
9 Quieter moments make it stand out from similar games Fast-paced action is exhilarating Your excellent crew provide levity General Engel is one of the finest villains in recent memory