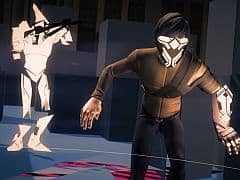 Robin Hood via Metal Gear Solid’s VR missions crossed with Tron and Trials sounds like the sort of thing you’d expect to hear come out a particularly chemically-assisted game jam, and yet the result is one of the most compelling games of the year. But while Volume is beautifully crafted, it is also curiously flawed, tightly controlled in places and yet bizarrely loose in others. In full flow, it is one of the most enjoyable time-attack games I’ve ever played, boasting a one-more-go appeal that borders on compulsion. And yet it has a curious tendency to make players exploit it, rather than earn its many rewards.

Controlled from a top-down perspective like early MGS, the playing field is rendered as a virtual simulation of various environments controlled by the new ruler of England, 2044’s most miserable billionaire, Guy Gisborne, who alongside his various cronies has used technology to create the usual Orwellian dystopia. Its retelling of the Hood story is cute and engaging, if not a little intrusive (more on that later), and gives constant context to the sneaking and robbing young ‘Rob’ gets up to across many stages.

On-mission the Kojima influence is obvious, from the environments, guard patrols (and their vision cones), to the objectives. None of the maps are particularly large, but many are intricate, multi-part affairs with just the right amount of user freedom. Volume’s stage design is routinely excellent: it funnels players towards their goals while giving them the chance to navigate the stage their way. It is complemented expertly by a steadily expanding set of tools, from movement mechanics to user-placed environmental hazards, each of which is as simple in practice as it is sophisticated when used in conjunction with the others.

Volume’s stark, flat, colourful visuals complement its mechanical design beautifully. In many stages it’s possible to immediately identify the coming hazards, and plan a route accordingly. There’s no fly-by, or planning phase, because it’s not needed. It has all the at-a-glance visual information you’ll need, and the slick movement and collision enables players to pirouette in and out of patrols with ease once they know what they’re doing.

Keys must be acquired to open doors, items gained to temporarily slow (you can’t kill) your enemies, special abilities recovered, tricks and traps of all stripes used and avoided as the stage demands. At its best, it combines all of these elements into a legitimately tense whole: you know what to do, you know where you went wrong, and you’ll immediately know how – and where – to fix it.

Despite all of this excellent work, Volume feels let down by its checkpoint system and AI, the former of which is ripe for the aforementioned exploitation throughout the game, the latter exacerbating that particular problem for most of the early going. Checkpoints are prevalent throughout the stages, ostensibly to reduce frustration and provide constant forward movement for players.

Hitting a checkpoint sends enemies back to their starting positions, which makes sense in that it keeps players from getting stuck in an unavoidable death-loop. But it also means that you can effectively game the AI into chasing you, pulling it out of position to complete certain objectives before hitting a checkpoint and getting deliberately killed. The net result is that you’ll have achieved your goal, reset your foes, and potentially skipped a few stages of the mission’s design.

There’s also the issue that passing through a checkpoint, even while in a death animation, sees it trigger with no time penalty. (There is a cooldown timer reset for your gadgets, but some recharge so quickly it’s of negligible impact.) Seeing as the death anims are slo-mo runs, it’s entirely possible to work positions where you should really die and yet burst, head down with Vangelis playing in your internal jukebox, through the checkpoint and just keep on running.

This is particularly prevalent in the early missions, where the gun-toting AI guards are easily fooled or exploited. It takes them a little while to fire their weapons, and ducking behind a pillar or a wall breaks their sightline and resets their firing behaviour. Cue a bizarre and hilarious few stages where it’s possible to dance around pillars, grabbing gems and essentially turning the AI on and off before making off with your ill-gotten goods.

At its best, Volume asks you – and crucially, enables you to – sneak beautifully, with purpose, skill and a plan. The first third, however, feels like you’re not really beating it, more cheating it, and not via the discovery of peculiar wall collision or screwy Z-axis, but simply as a matter of course.

Later stages make amends mainly by introducing a new enemy type, which is fast and melee-focused, meaning kiting it is difficult. It’s a staple of the game from about 60% onwards, and while it’s still possible to get further, faster than you really should via the checkpoints, the issues are mitigated. What isn’t is the intrusion of the narrative: massive character dialogue boxes sometimes mask some of your route, and pressing pause or even completing a mission mid-sentence restarts the dialogue which was playing, sometimes on subsequent stages. It’s particularly galling, seeing as the game often puts players in near-flow states and the score, fundamental to that goal, is superb.

These issues are substantial, and yet Volume has a pull which does enough to see you ride them out. This is particularly true from around halfway in, as the package comes into focus and its addictive qualities assert themselves. Ambitious and accomplished, Mike Bithell’s follow up to Thomas Was Alone is a beautiful game which sometimes undermines its sizeable accomplishments. It’s flawed, then and yet still utterly recommended, especially if you’re the competitive type. Or hate your friends.