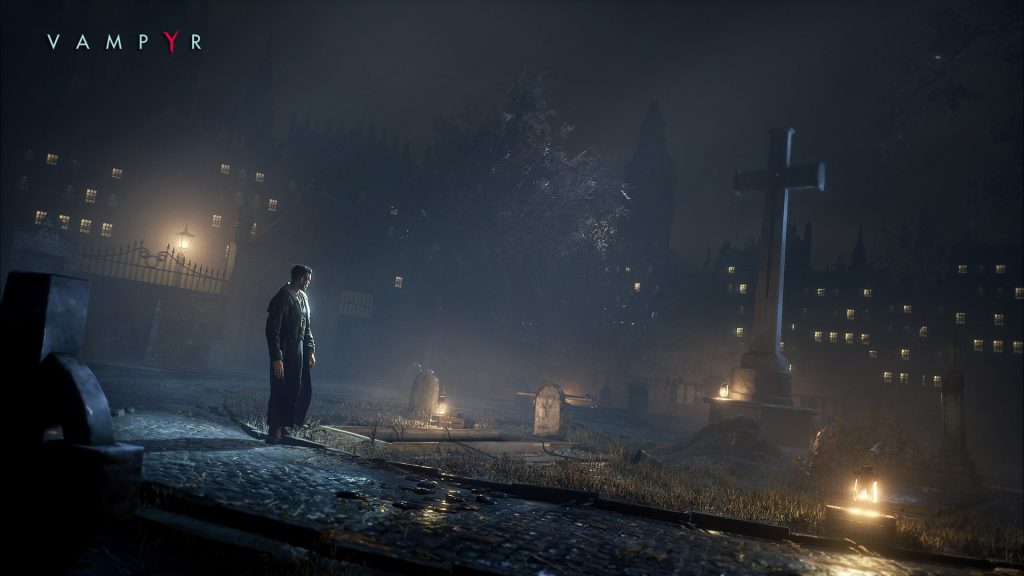 There are many reasons to enjoy Vampyr, a prominent one being that it is so beautifully early-2000s goffic that one gets the feeling one should be blasting My Chemical Romance’s debut album Three Cheers for Sweet Revenge on loop whilst playing, or editing key cutscene moments together over Bring Me to Life by Evanescence, uploading the resulting video to YouTube with a title like ‘Jonathan Reid x Lady Ashbury Song Fic Best Moments!!!’ Yes, it’s time to strap on your not-accurate-to-period late Edwardian/early Interwar cosplay corset, ‘cos Vampyr is about to bring the noise.

I want to be clear that absolutely nothing about the preceding paragraph is intended to be insulting – and in fact you should probably ignore the desire to whack on some blistering emo rock because that would drown out the hauntingly lovely original soundtrack, which is one of the most universally excellent parts of the game. Get ready for a lot of anguished, faintly threatening strings sawing back and forth in an appropriately dramatic way. Vampyr also captures a face of London that I still love seeing today: the foggy, wet, leaves-on-pavement, loveliness. The winding backstreets and nonsensical town planning. What a beautiful old lady London is, oh yes. See me striding through the mist to drink the blood of the unwary.

The unabashed drama of Vampyr, while it can veer into being a bit silly, is almost universally enjoyable in the game; our bloodsucking anti-hero Dr. Jonathan Reid is given to much monologuing and I enjoy him for it. He’s unfailingly polite to everyone, calling them sir and my lady even when they’re demonstrably an asshole or he’s planning to eat them. This, neatly, is both fitting with his character as an upstanding doctor, and also keeps him on an even enough keel for the player to not be whiplashed between varying tones by different dialogue choices. But when he’s alone he decries things out loud with a lot of anguish and drama, and I approve, because Dr. Reid isn’t the sexy kind of vampire who exists to languorously go at it with attractive women in diaphanous nightgowns, pausing only to drink blood out of a crystal wine glass. He is the tortured kind who is obviously still sexy but also very much conflicted and upset about the whole thing, which is the sort I would be because it is clearly the most fun.

To be fair, we’d all be a bit peeved if we managed to survive the Great War by the skin of our teeth, only to end up a creature of the night, thumping round the East End in a bad mood because people are getting sick and mutating into monsters, and if they’re not doing that then they’re vampire hunters trying to kill you, and if they’re not doing that they’re other vampires being really bloody aggravatingly mysterious about things as Dr. Reid is just trying to figure out what the hell is going on. 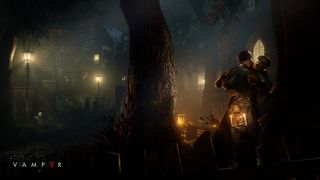 This leaves a small percentage of the population just trying to get by, surviving both the monstrous plague ravaging the city and each other’s casual cruelty. In each of the four districts you visit there’s a cast of unique characters who all have their own personalities and problems. The quickest way to level up in Vampyr is by eating one or more of these delicious walking lunchables, and it’s an effective and original tack to take with levelling a vampire, but there are several reasons to consider your choice carefully. Morally corrupt people have worse blood, and anyone’s death will have a knock on effect on their social circle as well as the district’s overall health rating. It’s possible for areas of London to become barren wastelands full of blood and rats and monsters. This in turn changes the ending Jonathan gets for himself.

Whilst some people are very good and others awfully bad, most people are morally grey in interesting ways. Every character in the game has secrets to uncover, which you can do by finding old letters and diaries, spying on people, listening to conversations, or asking around, and it’s almost always worth doing. Vampyr doesn’t offer judgement, it just presents facts and then you use weasley logic to justify killing people but still feel like you’re in the right, and it’s excellently done. There’s the wife of a gang leader who’s having an affair with the second in command, a mysterious pair of twins lurking around a church, a nurse on the take, a doctor on the skag, conspiracy theorists, activists, journalists, alcoholics, murderers…It’s an interconnected London with a surprising amount of historical context. You’ll run into people talking about economic inequality, campaigning for votes for women, and soldiers struggling with ‘shellshock’ after the war.

The choices you make are crystalised in the Pillars of the Community, four citizens who have a huge effect on the area in which they live. You’ll run into them all eventually, and must choose whether to let them live, kill them, or, if you know enough about them, mesmerise them and change their outlook. And the best thing is that letting them live isn’t always the ‘good’ choice and killing them not always the ‘bad’. You actually have to pay attention to their actions and think carefully about possible outcomes. I screwed up a lot by assuming Vampyr conforms to more normal methods of choice making in games and it doesn’t, and that is fantastic. It’s truly worth exploring all the conversations and taking risks when selecting Jonathan’s evening meal, just to see what happens, because you will be surprised. There’s no optional saving or trying again; as Jonathan sleeps it off like a big python in a nice coat, the choices get locked in and you must wake up and see what you wrought. 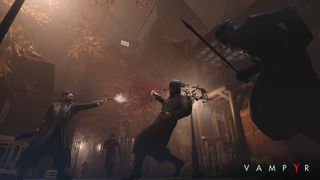 This isn’t to say that Vampyr isn’t flawed. You can try and avoid combat as best you can, but at times there’s no getting away from it, and sadly fighting both the Skals (mutated vampires) and Priwen Guard (vampire hunters) is an unfortunate affair. Though there’s variety in the enemy types and you get weapons and vampiric abilities that you can change to suit your style, battles usually devolve into button mashing and fighting the camera as much as your enemies. There’s been effort put into layering and balancing the combat with consumables and different damage types, but compared to a lot of the rest of the game it’s imprecise. It doesn’t make you feel cool, it makes you feel frantic and uncontrolled, which is to say: not really the best parts of being a vampire. Conflict doesn’t have to be traditionally guns-and-knives at its core to be awesome, and on balance I think I’d have preferred more weird nocturnal Londoners to talk to.

The narrative also throws some curve balls at you, with some plot points presented as revelations but sort of after you already knew about them, and others appearing out of basically nowhere accompanied by supporting characters who aren’t as convincing as some of the minor ones. Though tying vampire mythos into pagan legend comes up as quite a cool twist on a well known story, not all the threads you’re given get tied up in a satisfying way, which is a bit of a blow when the story has essentially been a mystery one. There’s also the nagging feeling that Dontnod wanted to give you more room to explore unfettered than they ultimately could, as you’re given the opportunity to supernaturally leap to ledges but not many ledges to do it to, and long loading screens will pop up whenever the game needs space to think, which can be at quite random times.

Vampyr is good, and it does some exquisitely clever things, and as long as you’re happy to lean into a kind of consumptive, Byronic flair for the dramatic then you’ll have a good time — even on consecutive playthroughs, during which I have discovered new and interesting things I didn’t on a first attempt. It’s really just my hope that someone throws infinite money and time at the devs for a second one. There’s a lot of life spilling from the arteries, but other veins are coming up dry.

Vampyr serves delicious ladles of angst and drama with a hearty slice of excellent, morally grey choice system that will genuinely surprise you, all wrapped up in a wonderfully gloomy London. It's just a shame the combat turns a bit sour.
7 Excellent interconnected people with secrets Cool choice system will surprise you Incredible angst