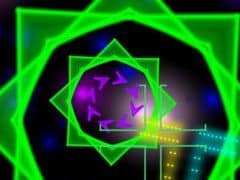 Acclaimed Welsh developer Jeff Minter clearly adores the 1981 Atari arcade release Tempest. Since he undertook reworking the tunnel shooter for the Jaguar in 1994 as Tempest 2000, the Llamasoft founder has conceived a number of sequels and tributes to Dave Theurer’s original coin-op classic, polishing and refining as he goes.

Last time it was Space Giraffe, 2007’s peculiar spin on Tempest that polarised opinion with its erratic learning curve. Now Minter has returned to the genre with TxK, crafting a title that more closely fits the Tempest mold.

For those who’ve not spent time with the genre, the fundamentals are straightforward. TxK and its forbears take the vertical 2D scrolling shooter and apply its form to the inside of a tunnel; be it one that totally encloses the game space, or leaves it hanging open and changing, suspended like a wireframe sheet in the wind.

TxK demands players pilot a craft through 100 of these tunnels, each of which is realised in brilliant slashes of neon that linger long after play. They are superb creations, increasingly crammed with luminous enemies and power-ups. Each grows evermore complex, sometimes mocking the player with tricks on the eye. It’s a vivid, overwhelming experience, with a precisely honed balance of speed and movement that sees every stage peak in a crescendo of gaudy explosions. And it’s all set to a superb soundtrack that tips a glowstick to the breakbeat hardcore of UK raves in the early ’90s. Elsewhere, from the UI to its humour, TxK is a game sincerely influenced by the past.

Yet while its frantic gameplay is compelling, and the scoring simple, TxK’s initially a confusing beast. It introduces its modes and nuances with a bewildering lack of clarity, frustrating players at the very point it is debuting some terrific ideas.

Ultimately, though, TxK is tremendously enjoyable, and adds another weapon to the Vita’s arsenal at a time when the handheld is enjoying a wave of great releases.

A vivid, overwhelming shooter.
8 Vivid neon worlds soaked in a glorious rave soundtrack. Wonderfully intense gameplay and finely balanced control of movement. The core game mode delivers lengthy play sessions incongruous to its intensity. Struggles with introducing the player to its nuances, which can feel frustrating.