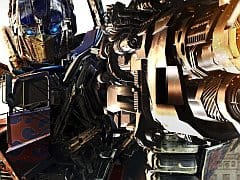 Transformers: Dark of the Moon Review

The life of a developer in charge of a movie tie-in is fraught with peril, and up on the chopping block today is High Moon Studios. It’s had less than a year to make an entire game based on that Transformers: Dark of the Moon movie they’ve got coming out – you know, that franchise from the cartoon with the toys doing all that robot stuff – which obviously is quite stressful in itself. I think we must all expect that some corners are going to be cut somewhere, but I empathise with how difficult a job it must be for the poor guys.

Despite all this, I really must ask: who in their right mind decides to map steering controls of the Transformers’ vehicle forms to the right analogue stick?

Every video game in the history of time has you steer cars with the left stick. We’ve all learnt it. It’s innate. Obviously High Moon Studios got their cars mixed up with the control scheme of Halo, but you’re not actually steering the car in Bungie’s classic series – it automatically moves to where you’re pointing the reticule. In Transformers: Dark of the Moon, however, you are steering cars with the right stick. It’s all wrong, wrong, wrong.

You can ignore the bigger changes from last year’s unexpectedly well-received Transformers: War for Cyberton, such as the complete lack of campaign co-op or the new stealth force transformations, because it’s the little things – like those wonky steering controls – that are more indicative of Dark of the Moon’s hurried release and flawed existence. It’s a lot of flaws, some more significant than others, adding together to create the unlikable whole.

The first thing that needs to take a deserved battering is the campaign length, which weighs in at a measly four hours. It’s a linear string of seven levels, with you knocking down stages as Bumblebee, Ironhide, Mirage, Soundwave, Starscream, Megatron, and (the one you’ve all been waiting for) Optimus Prime.

On paper the idea is that each character brings a unique flavour and personality to the proceedings. Ironhide, for instance, is a lumbering brute – and one of the rare examples of a Transformer that actually has more guns on his chassis than product placement. This emphasis on individuality doesn’t really work in practice, however, as most characters only use minor variants of the exact same rifle-and-machine-gun combination.

Most of the game is explicitly familiar territory, alternating between long-distance outside shooting galleries to funnelling you down tight indoor corridors. It’s all remarkably commonplace stuff, and with so many other, better options available in 2011, there’s not nearly enough creativity in Dark of the Moon’s corridors to lift the core of the game beyond the mundane.

It certainly doesn’t help that the game features its own scoring system based upon incrementing a multiplier with melee attacks, thus ensuring the entire game plays out in the same way regardless of individual flair: Knock a few characters down with powerful melee attacks to boost the multiplier before blasting away at anything else in the vicinity. It doesn’t matter if you’re cruising around as Bumblebee or hoofing it as Megatron, the whole game is a rinse-and-repeat exercise with different character models.

The rushed choice of aesthetic – a city, a jungle, an underground complex – lacks the otherworldly intrigue of War for Cybertron’s twisting metallic constructions, replacing the former’s varied colour palette with a dull, endless procession of mottled browns and uninspiring greys. Ammo is infinite and there’s no choice of weapon or loadout, and tactics don’t get any more complex than choosing when to optimally reload. You simply plough forward jamming away on the triggers.

Each character does, however, get access to two unique abilities. The first recharges of its own volition and the other one – usually the more powerful of the duo – requires you to absorb Energon from fallen foes. Occasionally these will be tied to the actual levels, such as when Soundwave has to disrupt energy fields with his aural pulse, but more often than not they’re like the itty bits of salad added to a pub lunch – failed attempts to add a bit of colour and variety.

When Dark of the Moon does actually aim for something noticeably different, the end result is an unpleasant one. There’s a laughable stealth section in the third chapter which simply doesn’t work at all, and later in the game you’re fed into two uninteresting aerial encounters with clumsy controls and a non-existent sense of challenge. These not only artificially pad out the length of the campaign, they also make you realise just how threadbare the game actually is.

But, really, a semi-decent Transformers game can dispel many of its faults by giving you That Button which turns you into a vehicle (and makes the noise) so you can go vrooming around quick enough to ignore the spartan environments and poorly detailed enemy forces. Also introduced here is the Stealth Force, the middle-mode between robot and vehicle, which allows you to zip around and strafe in your car form, lock-on to enemies, and receive hefty bonuses to your defence.

Stealth Force also has the side effect of almost single-handedly removing the incentive for switching between robot and car, which explains why the unpleasant melee-orientated score multiplier was added: you can only melee in robot form.

The class distinctions between the Transformers are more noticeable in multiplayer, which has you battling as one of four classes around a particularly dull selection of five maps. Predictably, you’ve only got the core multiplayer modes on display – Deathmatch, Team Deathmatch, and Domination.

Like the rest of the game, multiplayer is resoundingly average. Being able to transform into a vehicle and dash away to escape confrontations adds a unique spin on the experience, however, and the sheer speed of your vehicular form means the entire map is rapidly traversable. In Domination, for instance, point A and C aren’t safe captures even at the very beginning of the game.

War for Cybertron’s Scientist class has been replaced by the new Hunter, though the end result has inexplicably been made worse in the transition, thanks to the latter’s dearth of useful skills. The armoury and customisation options have been significantly scaled back, too, leaving multiplayer battles as simple wars of attrition with a range of predicable perks and generic weapons.

It’s also a shame to see that Escalation, the generic but entertaining 4-player co-operative mode, has been chopped from last year’s game. With the scant range of multiplayer modes and maps feeling like an optional bolt-on, one unlikely to grab your attention for more than a couple of hours, it would have made much more sense for High Moon Studios to simply include Escalation instead of the others. There would have been less incentive to trade the game in at the first possible opportunity, at least.

It’s a shame that Transformers: Dark of the Moon exhibits so many fundamental flaws in its design, as from time to time you get a fleeting vision of what High Moon Studios is trying to create. In a few scenes Dark of the Moon is almost redeemable, but good intentions and a talented developer isn’t enough to save this hurried game from being a decidedly average experience.

It's a shame that Transformers: Dark of the Moon exhibits so many fundamental flaws in its design, as from time to time you get a fleeting vision of what High Moon Studios is trying to create.
5 Robots in disguise Lacking multiplayer Short campaign Who puts steering on the right stick?

Transformers: Dark of the Moon

In Transformers: Dark of the Moon players will fight in epic battles…

Transformers: Dark of the Moon

In Transformers: Dark of the Moon players will fight in epic battles…