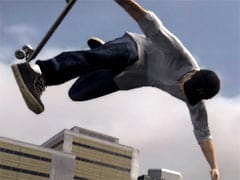 If one run of games is a victim of its own success, it is the Tony Hawk series. When the original was released it repositioned the boundaries of what could be expected from the extreme sports genre. Its pioneering controls and unique structure have since become standards that have reached way beyond the remit of skateboarding, and its popularity with skaters and those who choose not to surf sidewalks has rarely dipped, even when the series went through something of a dark age with the ‘Underground’ branded iterations.

The failure in that success came from peaking to early. Tony Hawk’s Pro Skater 2 was an absolute masterwork, and by number four the series had really explored all it needed to. Excluding spin offs like Downhill Jam and the handheld adaptations, Proving Ground is the ninth in the series, and in following-on from a range of games that have exhausted almost every school of skateboarding technique and offshoot of the subculture, the latest from Neversoft has its work cut out.

Any effort by Hawk to re-establish itself as the essential skating game has been further hampered by the recent arrival of EA’s marvellous Skate, a title that itself owes a great deal to the formula laid out by Activision and Neversoft. In having become the first serious contender for Hawk’s crown, Skate has now subdivided skateboarding games into two camps, where before there was only the work of the Birdman. What that means is Hawk’s creative freedom to flex and change has been stifled by a new need to distinguish itself and stick to the creative direction it has already staked its claim upon.

There is certainly the space for two high-end skating games, and with their different approaches to control and tempo, their coexistence can only make for healthy competition. While Proving Ground is by no means the best Tony Hawk game we have seen, it shows all the signs of a series that had grown complacent getting back to what once made it shine. That’s not to say Proving Ground is anywhere near perfect, but for the first time in a long time, the series is looking like a rough sketch for innovation. Project 8 was of course a true return to form for the run of games, but it certainly lacked any sense of a new direction for the Hawk.

Most on offer here will actually be fairly familiar to fans of the series. The focus on button hammering combos, the magnetic draw of long looping grinds and the obsession with fantastical skills are all present and correct. However, this time around there is a new emphasis on the kind of skater you become, and the entire structure of the game has been given a modest overhaul that realigns the feel of the experience as a whole.

Most significantly you can choose to become one of three kinds of skaters. Perhaps the most familiar will be the hardcore skater. Dressed in heavily ripped clothes, his is a life of tussles with security guards, battles for territory and aggressive high speed skating, and his heart lies with the sport’s past. Next up is the currently prevalent career skater, who seeks sponsorship, signature equipment, fancy white trainers with gold leaf decals, and clean, pure skating that makes for great black and white photography. The last is the rigger. Usually bearded and eccentric, these skaters are into the challenge of creating clever spots from scrap as much as the riding.

How this affects your progression is by assuring that there is always a selection of goals to tackle from across the three schools of thought. In recent Hawk games, despite their apparent structure of openness, it was all too easy for the entire game to pivot on one goal, which could trap you for hours. Here, there is always plenty to do, though what is curious is the fact that many of the game’s new additions, such as the fantastic new ‘nail a grab’ feature, which effectively lets you create your own grab moves on the fly, are not available until you have completed a substantial chunk of various threads of the storyline.

Other than those new additions, those who have done enough in-game ollies to form a callous on their finger will be in totally familiar territory, and elements from Project 8 like the star rating system for your proficiency at each goal return. There is a new video editor, which is fairly comprehensive, but as is often the case with in game tools it is unlikely to used by those looking for some fast fingered action. As has been the fashion with each new Hawk game, most of the smattering of new tricks reach back to skating’s distant past. Before we have seen light footed flatland moves and audacious Bert-slides added to the ever increasing roster of tricks applied to the near infallible control scheme, while this time surf inspired slices and curves that allow you to ride ramps like concrete waves have been included. Perhaps the most significant new features comes in the form of a fiddly yet useful tool for creating and placing ramps, that gives you certain creative freedom, but takes away some of the pleasure of exploring a complete and untouchable world.

The tradition of the Tony Hawk games to add increasingly intricate hidden lines and ramps to every virtual square foot of cityscape continues, but things have finally become a little too crowded. Compared to the challenge that the realistically sparse streets of Skate provide, here things feel like there is too much on offer, rather than any clever combinations of curved wood and twisting coping.

Still, Proving Ground is every bit the fully-fledged skating game. Sadly, it does lack the visual shine of recent iterations, and occasionally there is some glitching when you bail, which was a regular problem in early Hawk games that seemed long ago resolved. The soundtrack as ever mixes punk and hip hop, which you already know how you’ll feel about, though this time the choice does seem more considered and informed, and there are several legends from smaller labels like the Gorilla Biscuits.

Predictably, Proving Ground falls into the ‘more of the same category’. When that means more of the same of something brilliant and proven, there’s reason for both contentment and disappointment, but if you know you like Tony Hawk, though you’ll not be blown away you should certainly feel comfortable here.

Predictably, Proving Ground falls into the 'more of the same category', but if you know you like Tony Hawk, you should certainly feel comfortable here.
7 Has all the traditional elements you'd expect. Really does feel like the beginning of a new direction Graphically rather rough around the edges Lacks the playability of Project 8