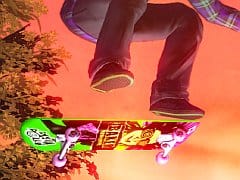 As you probably already know by now, Tony Hawk: Ride has had one of the worst critical receptions of the year – indeed, it’s hard to remember the last time such a high-profile project was given such an all-round kicking. So severe is the game’s woeful reputation that I was almost frightened to open the box, lest it should unleash some kind of Biblical plague, or perhaps a rain of malevolent insects. While this happily wasn’t the case (I did see a few woodlice scuttling around the office, but we get them all the time), I can’t say that I was delighted with what did come out.

Actually, that’s not completely true, because the skateboard controller itself seems like a pretty decent bit of kit – on first appearance, at any rate. The deck feels solid and well-made when held in the hand, and when you jump aboard for the first time – most likely mere moments after you’ve ripped it from its box – the initial signs are promising. Sure, there are no wheels, but the curved underside of the peripheral seems to offer a sensible alternative – requiring the player to maintain balance, but providing enough flexibility to let you twist and jive about quite easily.

Unfortunately, everything starts to fall apart once you actually turn on your console. Tony Hawk: Ride kicks off with what seems to be a fairly thorough calibration process, forcing you to tilt the board in a number of directions and to hold each of these poses for 10 seconds or so. While it’s slightly annoying to be put through this kind of thing, most of us know that these tweaking sessions are a necessary evil that enable us to have pin-point accurate gaming. The problem is, Ride doesn’t keep up its end of the bargain – in fact, it effectively kicks us in the nadgers and runs away with our collective wallet.

As a game controller, Ride’s skateboard has all the precision of a blind snooker player with no arms. The pushing-off mechanism works okay – you simply keep one foot on the deck while running the other past one of the two sensors on the board’s flanks – but as soon as you try to change direction, things take a turn for the worse. In theory you should be able to steer by shifting your weight to one side of the peripheral, but in practice it’s impossible to do this with any degree of control. The board responds to your input in such a way that you either massively oversteer, cavorting about in what seems to be an impossibly tight arc, or else you barely change direction at all. As a result you tend to end up steering via several sharp jerks, lurching back and forth until Lady Luck smiles and puts you on a course that’s close to your intended direction. In short, even simple navigation is a frustrating and stressful endeavour. Given the coordination that skating requires, this flaw would be enough to shoot Ride in the foot from the get-go – but unfortunately it’s just the start of the game’s problems.

If you can’t bear to deal with the headaches of player-controlled movement, you can save yourself a lot of hassle by shifting the difficulty level down to the lowest setting. At this point the game essentially becomes an on-rails skating experience: your virtual unemployed slacker will cruise along a predetermined course, with the player merely choosing a direction at set forks in the road. Playing in this way removes one of the great pleasures of skating video games – namely the notion that your surrounding environment is an open playground – but it does at least allow you to focus entirely on pulling off tricks. And for a short while at least, this can actually be quite fun.

As I mentioned earlier, the Ride peripheral is designed in such a way that it’s pretty satisfying to juke and twist your hips about. To perform an ollie or nollie (that’s a jump, for all you straight-laced Mum and Dad types) you quickly step on one end of the board to tip it up in the air, and then let it drop; keep the board tilted as you land from a jump, and you’ll perform a manual – the move that would be called “a wheelie” if we were in the early ’90s and you were riding a BMX. For more complicated “flick” moves, you tilt the board up and then make a sideways swivel movement before bringing the end back down to earth; a similar set of “tilt” tricks involves rolling the board sideways as you lift up. There are also four sensors, placed at the compass points of the deck, that are supposed to let you pull off grab moves while you’re airborne, but these are generally as responsive as your Uncle Kenny as he sleeps off yet another bottle of cheap gin. They barely work at all, but even the moves that do work are subject to an irritating lag, taking place a good second or two after you perform the relevant action.

Despite this fuzziness, there are splinters of promise lodged deep within the rancid flesh of Ride’s gameplay. The main campaign mode uses a Rockband-style unlock system, wherein players must earn a certain number of points in various events before a new area will open up. These “sessions” are split up into Speed, Trick and Challenge categories. The first of these gameplay types will either be highly irritating or a bit redundant depending on what difficulty you’re using (time trials tend to lose their thrill factor if you’re not actually steering), but the second set can be quite diverting. Here you’re generally just aiming to earn as high a score as possible within a set time limit, and for a short interval this can be quite entertaining. You stand on your £100 toy and wiggle about like a young Forrest Gump. “Look Mah!” you’ll cry, your voice cracking with childlike delight. “Ah’m skatin’! Ah’m skatin!”

The problem is, you’re not. If you were standing on a real, moving skateboard, centrifugal forces would help you to keep your balance; as you’re actually just tooling about in your living room, Old Mother Physics refuses to lend a helping hand, and you’ll frequently find yourself stepping off the deck. More problematically, your swivelling tricks will often leave you at an odd angle to your TV; in real-world skating, you’d simply steer yourself back on course, but here you need to either get off the peripheral and re-align it, or else perform another trick just to twist yourself back into position – and depending on your in-game surroundings, this might cause you to wipe out… in a display of embarrassingly last-gen animation. It may sound strange, but accidents (and painful injuries) are a big part of skater culture. EA’s Skate games have turned wipe-outs into an art form, but here even the failures fail.

As annoying as these issues are, the worst of Ride’s flaws is only revealed once you enter a Challenge session. Here the game asks you to perform a number of specific tasks or tricks in quick succession, usually using a notable piece of scenery: you might have to pull off a manual for 50 yards, do a flick-trick over a statue, and then grind over a series of railings, hopping between each one. It’s the kind of assignment we’ve always seen in skater games, but here you’ll learn to dread them. Why? Because it’s hugely tricky to be exact with your actions. It’s easy to score points while you’re gimping about on a free-form half-pipe competition, and if you like you can convince yourself that you intended to do that 540 Degree Reverse Fish-Spaz, or whatever the trick is called, but as soon as the game asks you for something in particular, the illusion shatters. I’m not sure whether the fault lies with the software or with the peripheral, but either way the game will constantly mistake flick and tilt tricks… and heaven help you if you’re asked to wake up one of the grab sensors.

There are lots of other things to complain about with Tony Hawk: Ride – the basic graphics, the cheesy greenscreen videos, the way models frequently clip, and the strange “warping” that occurs when you leave it a bit late to perform a jump. Then there’s the fact that there’s no consistency about when you can and can’t use the board to navigate menus; you’ll have to keep a controller close by, just to be sure. I could also point to the scrawny multiplayer mode, an offering so bare-bones that it could cameo in an episode of He-Man, or to the brazenly in-your-face in-game advertising (even some of the trophies and achievements have brands in their titles). But to be honest, these complaints are almost beside the point. This is an expensive peripheral-based game where the expensive peripheral doesn’t work; the other cock-ups are just extra nails in the coffin.

The sad thing is that every once in a while you get a brief sense of what this game could have been. The trick-based gameplay shows occasional flashes of potential, and the board peripheral could have worked. Maybe somewhere in a parallel universe there’s a reality where Robomodo pulled it off; unfortunately, we’re stuck here – and in this world Tony Hawk: Ride falls on its arse, big time.

The first Tony Hawk game to utilise a skateboard peripheral.

The first Tony Hawk game to utilise a skateboard peripheral.