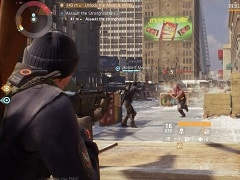 The Division is a very interesting game. It’s a game caught between worlds, and could be described as a shooter, or an RPG, or an MMORPG, or a shoot-and-looter, and it’s sort of all of those things and yet none of them. It’s a mongrel, and being a mongrel is what gives it the soaring highs as well as the flaws.

The blurring between genres is embodied by your character, a sleeper agent in The Division – a clandestine task force to restore order when all else fails – activated after a virus is released in New York, decimating the city and surrounding area. At character creation you go “Ah yes, an RPG,” but then realise your choice is from a stock set of approximately 16 faces, all of which are a bit amorphous, as if they were molded from brie and then left in the sun.

In game your agent is a stoic soldier, trained to dispassionately kill thugs who were once their fellow citizens and never once speaking, so you go “Ah yes, a shooter.” Except you can also customise their entire outfit, separate to their combat gear, with clothes as described by someone’s dad: ‘trendy military jacket’, ‘cool waterproof boots’, so you go “Ah yes, an RPG,” again, before you get to grips with the classless class system, which is decidedly not like an RPG.

Rather than locking your character into one class, you can change your role on the fly by using the interaction between your gear and abilities. The combat gear has different scores which directly change what your character is best at, which, despite being a complex system, works really well in game. Skills (the abilities you can actively trigger in combat) are also well designed to balance with different roles, and, as is the case with the most fun bits of any game, are ridiculous. Aside from area of effect healing and portable cover, you can get yourself a riot shield that heals you as it gets shot, or a sticky bomb that fires long distances and attaches to/explodes that bastard sniper. Having different skills mapped completely changes how you play.

This has all been done in the name of good multiplayer, and it’s worked: the multiplayer in The Division is probably the most fun multiplayer has been for literally years. The shining light of the whole game is the PvP in the Dark Zone.

It’s in the Dark Zone that you run into other players, and all bets are off. The NPC enemies are tougher too, and you’ll often find yourself teaming up with these unknown agents to take them down for the higher level loot. Dark Zone loot is more valuable than loot from outside, and at any point those dudes you were working with a second ago could suddenly decide maybe they want what you’ve got.

You’ll often find groups of hostile players camping around the extraction points. You start to eye up other players suspiciously by default; you can even be fired upon accidentally if a twitchy agent mistakes you for an NPC, and then everything has to be diffused with a hand wave or salute emote. There’s proximity voice chat if you all have your mics turned on, leading to heavily accented and tentative hellos, congratulations on stylish kills, and agreements to cover one another on the extraction. It is, genuinely, fantastic, and the unpredictable nature of the Dark Zone is what makes it so.

In comparison the PvE missions can be fatiguing, boiling down to shooting increasingly difficult waves of enemies, no matter if it’s dressed up as a hostage situation or a main story mission. The emphasis is on cover shooting, and while the cover system is great the actual shooting still feels like firing nerf darts at mannequins.

This is especially true for the hard difficulty and at higher levels, where enemies have to be scaled as in normal RPGS in order to present a challenge, but their ability to take an entire clip to the face unphased is frustrating. It’s not ideal for, you know, an RPG that emphasises shooting. Luckily multiplayer comes to the rescue again. Matchmaking works well, and you can play the same mission twice with different teams and have a totally different experience, depending on how much you have to yell “Mate I’m down. Heal me. HEAL ME FOR FUCK’S SAKE!”

The other reason to play the main story, wherein you gradually regain control of New York via your Base of Operations and a support team that mostly sound like someone doing an impression of the Jersey Shore cast rather than an actual New Yorker, is the city itself. New York comes from the devs to your screen with a full day and night cycle and a winter weather pattern, ranging from bright, brittle sunshine to full on fuck-off-I-can’t-see snowstorms. There are still Christmas lights shining hopefully above streets piled high with trash bags and abandoned cars. It’s a huge map, and almost every inch is beautiful, in a post-apocalyptic way.

‘Almost’ because there are problems, which are more noticeable for glaring out of such a carefully built environment. You can shoot some glass windows but not others; you walk over some heaps of rubbish and see the bags move, but stride ankle deep through body bags; NPC citizens will clip through you but other agents don’t. Players have been reporting other issues to do with connectivity, being booted from the game at every loading screen, or being unable to activate their agent in the first place, but the version we tested was incredibly stable, aside from two disconnects and one incident where the agent went through the pavement and fell infinitely.

The Division is not a perfect game. There are flaws. But the flaws are mostly because it’s straddling genres, and this is also what gives it so many different things to enjoy. There are complicated inventory systems, daft explosives, a big open world to explore, and incredible multiplayer, but you don’t need to get invested in any of them to play the game. The Division is not a perfect game, but it’s really fun. Which is sort of the point, isn’t it?