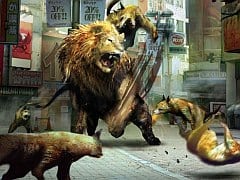 Tokyo Jungle is one of those titles that fuel the preconception that Japanese games trend towards the bizarre. Animals battle for territory, food and their lives in a post-human Tokyo. Lions scheme with hyenas to overthrow a rival pride. Packs of beagles and flocks of chicks come up against hippos and chimpanzees. Even extinction finds its efforts reversed.

The game’s Tokyo isn’t quite a jungle, but it’s getting there. The open world is made up of the city’s streets, train tracks and a park, with verticality offered by rooftops, flyovers and sewers. Grass grows through the concrete, vines hang between buildings and Tokyo’s concrete solidity has been torn open by the imposition of nature. The 3D engine renders this all quite well, but the fixed, distant camera angle makes the environments seem much more static than they need to.

The world is split into 11 zones, all connected together by snaking corridors, rather than as a single sprawl of city blocks. The map makes it easy to navigate, but heading from one end of the city to the other can be a time-consuming, often necessary chore.

The real stars of the show are the beasts that now populate Tokyo. There are a huge range of (mostly) mammals, and the way they populate the map and interact with each other is brilliant. There’s a joy in wandering the streets, spotting a zebra or a racehorse, and trying to work out how they’ll act towards you, and how they’ll react if you decide to attack them.

When you do get into a fight, the claw-to-hoof combat is quite simple. Red jaws on your rival’s neck means you can go straight for the jugular, which is especially effective when attacking unseen. But if you’re spotted, you’ll need to swipe at them until a killer opening appears. If they lunge for you, you can dodge and counter for an instant kill. Nature isn’t a particularly balanced bracket, so fights are usually one-sided, and the distant camera means they’re not particularly visceral either. Chow down on your prey and it’ll explode in a shower of bones.

Survival is the first and most interesting of Tokyo Jungle’s two modes. Your task is to choose an animal and keep it and its descendants alive for as long as possible. There’s a local co-operative mode, too, which sees two of you share the same screen. It also has loads of animal-specific challenges that are the main way of unlocking new creatures, of which there are about 50 in all. Some animals, however, need to be bought (with money) from the PSN store.

At first, the only beasts available to you are the tiny Pomeranian, a carnivore, and a particularly fragile-looking sika deer, a herbivore. Naturally this choice has a big impact on the techniques needed to survive. My little Pomeranian was always jumping from tall grass into the neck of a rabbit, or swatting chicks out of the sky. The deer has a slightly less demanding time tracking and chasing plants, and could potentially play the game kill-free. Both classes have to avoid becoming prey themselves, of course.

Even after a thorough tutorial, it can be a little tricky to keep track of all the mechanics and systems that Tokyo Jungle requires you to use. As well as environmental concerns like pollution, disease and the amount of food in the area, you need to keep on top of hunger, health, stamina, toxicity, your calorie-based rank, and the passing of time. Each year goes by in about a minute, which shifts the focus to your animal’s main biological imperative; his need to reproduce. When your age starts to reach double figures (but depending on your chosen species), you need to think about settling down. To do so, you’ll have to mark your territory – in the appropriate way; you know how – at predetermined locations in each zone. Locate a willing mate, take her (and it’s always a her, because you are always a he) to the local communal nest and watch in horror as you proceed to mount. Seriously, that fade to black doesn’t come nearly soon enough.

Control is then instantly transferred to your offspring. If you levelled up a bit when you were your father, and chose your mate well, chances are you’ll have inherited both some extra attributes and one or more brothers to aid your survival. The circle of life continues, just like in The Lion King, but now as a pack you can pick fights with a little less fear. It also means that if you die, rather than a game over screen and the need to start from year zero, you can carry on playing as one of your brethren.

After a few attempts, you’ll start to get used to satisfying most of your animal’s needs, so it’s now a case of surviving as long as possible and unlocking another, more powerful species. With the inconsistent difficulty caused by the interaction of all the game’s systems, this can be hard. The longer you live, the more likely you are to run across a pride of lions in a food-free area which has just become polluted, and your chances of surviving suddenly become very slim.

The game’s other mode is Story, which reveals just what happened to all the people. Chapters are unlocked by collecting archives – texts like newspaper articles or government bulletins that reveal information – in Survival mode. You need to collect three archives for a new chapter, but you won’t be able to collect the next three until you’ve completed the current one. This tedious back and forth to often far-flung reaches of the map combined with the unsatisfactory nature of the Story missions themselves means that this mode is hardly worth recommending at all, even though it does eventually offer a few surprises, and a few more species.

In the end, Tokyo Jungle should be praised for its originality, even though it isn’t a consistently engaging experience. If you’re willing to suffer the slog of survival through testing environments and even more testing game design you’ll be rewarded with a 70-year dynasty of beagles. If you don’t have such patience, you might find that your mutt barely makes it to his first birthday.

Tokyo Jungle should be praised for its originality, even though it isn't a consistently engaging experience.
7 A real challenge to survive Huge menagerie of animals to play with and compete against Some questionable design decisions Annoying Story mode