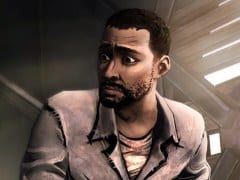 The Walking Dead: Episode Four – Around Every Corner Review

Walking Dead’s last episode left you with a colossal question. Who the hell is on the other end of that radio? Episode 4 doesn’t directly answer it, but it does its damnedest to create an excellent link between the previous episode, arguably the best in the series, and the upcoming finale, No Time Left.

Last time out, there were some massive changes to the group dynamic, and the vibe feels decidedly different leading into Around Every Corner. After the series’ most harrowing sequence, I wasn’t sure whether things could get any darker for Lee, Clementine and the rest of the survivors, but Telltale manages to take things into an even foggier area of brutality.

Moving into a more urban setting, the city of Savannah, the tension ramps up as you weave through tight alleyways, and creep through dank interiors with plenty of opportunity for zombie ambushes. You stumble across some horrific discoveries, all of which display the truly inhumane lengths humanity will go to in order to survive. This is survival of the fittest at its most potent.

As well as the inherent violence, this is the most frightening and action-packed episode to date, with both jumpy moments and firefights aplenty. A particularly scary segment forces you into the sewers, leaving you to fend for yourself underground against small pockets of the undead, without a decent weapon to hand. When you do manage to get your hands on a gun, you’re left to blow heads apart at your heart’s content. First-person shooting takes a more prominent role as you fumble around to land decent headshots, and it makes the combat much more satisfying than aiming a whopping great command reticule over a zombie’s head.

As ever, though, the characters in the Walking Dead take up far more screen time than any first-person gunfight. This is where the series continues to show its unrivalled strengths, but also displays its weaknesses.

Lee has come through hell and high water with Clementine now, and the relationship between them is one of Around Every Corner’s primary focuses. After the revelation that she’d been speaking to an unknown person on the radio, you still feel dedicated to keeping her safe, and no amount of anger towards the stranger-danger is going to stop you from protecting her from whoever has been enticing her in. There are some heartbreaking scenes with Clem throughout the episode, especially as she begins to press a desire to search for her parents.

But besides Clementine’s strength as a lead, many of the others pale in comparison. Kenny has sunk into a temperamental slump after losing Duck and Katja, so he takes a slight backseat compared to the Kenny-centric third episode, while newly introduced characters like the guitar-strumming hobo Chuck and impressively acrobatic Molly feel wholly unexplored. Ben, the ginger college kid who last time around admitted he was the one supplying the bandits with the group’s food, is in the spotlight for most of the episode, but is arguably the whiniest character of the bunch, and began to grate on my nerves.

Big choices are still the name of the game, though, and a couple of decision-making moments rival anything that’s been offered up so far – at least in terms of being able to predict what effects your choices are going to have on the final endgame. Simply put, Episode 4’s ending is mind-boggling.

However, technical issues still distract from what is a superbly well-acted game. Conversations hang in mid sentence as characters pause awkwardly, staring around silently before latching onto the next sentence and continuing a conversation. Moments of intense action freeze up, breaking the tension just enough for you to lose the flow. It’s not so bad that you’re going to fall out of love with what is arguably one of 2012’s greatest games, but it’s too noticeable to still be occurring 4 episodes down the line.

Around Every Corner might not reveal who’s on the end of that blasted walkie-talkie, but it ends with such an almighty bang you’re bound to return for the final fifth. Despite not giving new and interesting characters the screen time they necessarily deserve, the relationship between Lee and Clementine has never been more pronounced. Best of all, you’re left without a clue what’s going to happen next time around, but one thing is for sure, I cannot bloody wait.

Despite not giving new and interesting characters the screen time they necessarily deserve, the relationship between Lee and Clementine has never been more pronounced.
8 Fantastic ending A new level of darkness New characters could be better explored Technical issues remain

The Walking Dead: Episode Four – Around Every Corner

The Walking Dead: Episode Four – Around Every Corner