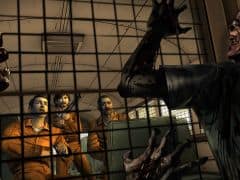 How did you feel during the Season One climax of Telltale Games’ The Walking Dead series? As Lee and Clementine worked through their most important exchange, it’s likely the answer to that question includes ’emotionally drained’ and ‘guilty’. Five episodes of making weighty, on-the-spot decisions conclude with a final segment that not only reinforces the grim reality of zombie-infested America, but hints at a potentially hopeful beginning with the arrival of Season Two.

Made up of five mini-episodes, none of which exceed the 20 minute mark, this is a breakneck ride through alternative survival stories that are plucked from the ‘Missing’ board outside Gil’s Pit Stop. You take on the roles of Vince, Shel, Bonnie, Wyatt and Russell in any order, allowing the developer to neatly deploy new scenarios that are always determined by your decision (or indecision) to wield a weapon.

Shel’s narrative is the longest and most recognisable. Attempting to shield her younger sister Becca from the bumbling horrors which lurk outside, memories of Lee and Clementine come flooding back. Bonnie’s episode is, after a calm beginning, particularly intense, while Russell’s encounter with a stranger quickly has the duo shooting at hostiles and sprinting between cover. As ever, human-on-human violence overpowers the threat of becoming a chew toy for the undead.

Dialogue is typically accomplished throughout, but it’s the back-and-forth between Wyatt and his weed-toting friend Eddie that steals the show. Alongside the serious, always-switched-on demeanour of the other survivors, it’s humorous to witness these two bickering.

It’s not often Telltale dips away from melancholy so that two characters can discuss penises in an ominous forest, but the chat lightens DLC that is otherwise crammed with impending doom. Before long, quick tokes and dick jokes subside for a decision that determines whether or not you will see Wyatt again.

Choices made by Lee and Clementine always seemed to produce a gaugeable result, but in 400 Days, nothing is guaranteed. Without spoiling significant moments, it’s important to approach each set-piece logically. Your decisions influence the epilogue and should link with Season Two, although at the time of writing it’s difficult to understand just exactly how.

Unless Telltale continues to jump between numerous playable characters, these mini-episodes will only produce the background for future NPCs. It’s hard to shake the feeling, however, that each surviving protagonist deserves more time in the hands of the player, even if you never get to love them like Kenny and the gang. This lack of character development is like comparing contestants from the original Big Brother to the current series’ gaggle of misfits; while you once enjoyed unpeeling the nuances of the original cast, the latest offering is quick to exploit the individual extremities of those on screen.

Instead of slowly uncovering Bonnie’s affliction for drugs, you are told straight away she is a recovering addict. Rather than wondering how Vince made it onto a prison bus, the crime plays out within seconds of starting. 400 Days is forced into being less subtle because Telltale opts for memorable events over character development. You meet, are slapped with a quick dose of context, and then forced to make a major decision. Along the way, a handful of smart nods towards Season One characters, locations and storylines are easily missed.

It’s testament to Telltale Games’ storytelling qualities that each of the DLC’s five mini-episodes could be fully developed during Season Two. While the depth and severity of the original series is missing, this quintet of sub-plots is well worth picking up for 400 MSP. Further down the line, 400 Days could prove to be a vital and highly-important thread between main plotlines that continue to hold you accountable for every decision.

Played through each vignette.

Less subtle than what went before, but an intriguing, quick-fire link to the next season.
7 Great dialogue and intense storytelling Clever nods link to Season One Hard to care for any of the characters after spending just 15 minutes with each