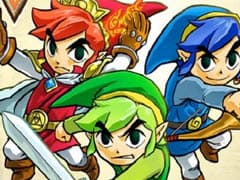 ‘Do I play The Legend Of Zelda: Tri Force Heroes with my friends, or do I play it alone?’. That’s probably the major question you’re asking yourself in regards to Nintendo’s latest, and it’s without doubt the most pertinent. Why? Because Tri Force Heroes on your own just isn’t as good.

The latest Zelda game is, without doubt, a multiplayer experience. Made abundantly clear since it was announced, it’s been pushed as an entity that should be played together. Anyone planning to follow such rules will feel suitably pleased with what this is.

Feeling very separate from the Zelda formula we’re all used to, this is a handheld version in the truest sense: it’s designed to be enjoyed in short bursts. Featuring miniature levels that can be finished within minutes, you’re given a very specific set of tasks for each, be that killing all the enemies in a particular area, or solving a puzzle. Not surprisingly the path to success is always centered around teamwork, so if there are three switches that need to be hit and yet are located at different heights, you’re going to have to form a totem pole and start lobbing people around the place. In short, you’re not getting anywhere without help from others.

This is the whole point, though. Designed to almost be a gateway drug to get newcomers onto the hard stuff, Tri Force Heroes is a light and fluffy Zelda outing that’s incredibly easy to pick up and play. It’s not even that big of a deal if you’re a lonely hermit either. Unless your plan is to play this using the 3DS’ local multiplayer functionality, jumping online with a friend is as fun and as satisfying as it is if you hook up with someone random – hurling on-screen commands at a teammate to come and hoist your character up on their shoulders while panic ensues around you is entertaining regardless.

Switch over to single-player and Tri Force Heroes morphs entirely. No longer a quaint game that can be enjoyed with other people, it’s now a mind-taxing click-a-thon as you try to control all three members of your party at once.

Played in this manner, all characters have to be controlled by you, leaving the other two as stationary slabs of nothing. They can’t move, but neither can they be hurt. This means it’s quite common to lose track of what exactly you’re meant to be doing simply because there’s so much finger jumping to be done. I’m sure some will take to it more than others, but when two of your ‘Totems’ are carrying arrows and another is responsible for bombs – and a boss requires to be struck by both – Tri Force Heroes can go off the rails.

To be fair to Nintendo, mind, it’s not like it’s been pushing this as anything other than a multiplayer game. Everything from its advertising to taglines paint this as a romp to be enjoyed with loved ones. With that said, longterm Zelda fans may find it runs out of steam quite fast, especially due to the lack of an epic adventure many will be used to. It also doesn’t help that this is a one or three player expedition. You can’t play it with just one friend.

Accept that’s what you’re getting, however, and Tri Force Heroes is a very nice – and light – Zelda offering. Aside from actually hacking away at monsters and exploring dungeons, there’s an ‘outfit system’ in place to tie in to the game’s nonsensical – but amusing – plot about fashion.

With the Princess Styla cursed from wearing nice clothes, it’s you who must dress-up as you try and free the land of this appearance-related ill. Different suits can be unlocked on your travels giving you new abilities and, more importantly, making you look like a numpty. It’s also where Tri Force Heroes gets its more strategic nature from.

Given that each level needs to be approached in a different fashion, there’s no point in all three ‘Links’ carrying the same weapon or skillset. Mixing and matching is the key to victory, and while it’s not especially deep it does allow for some thought, especially when you reach the final third of the game. It may never be crushingly difficult, but the challenge certainly increases.

Triforce Heroes is more of a Four Swords than it is A Link Between Worlds, and that’s fine. Get some people on board to play with you, and it’s a nice stopgap while we wait for whatever Nintendo is planning next. Be warned that you may encounter the usual 3DS server nonsense from time-to-time, but by-and-large you should be able to find a session with little bother.

Anyone wanting something a bit more substantial should probably heed Celine Dion’s words. And think twice…

A very good offshoot for the Zelda series, it's best – and in many ways should only be – played with friends. Fun, but a little shallow.
7 Very funny Great multiplayer Average single-player Short-lived

Cooperative Zelda for the 3DS

Cooperative Zelda for the 3DS