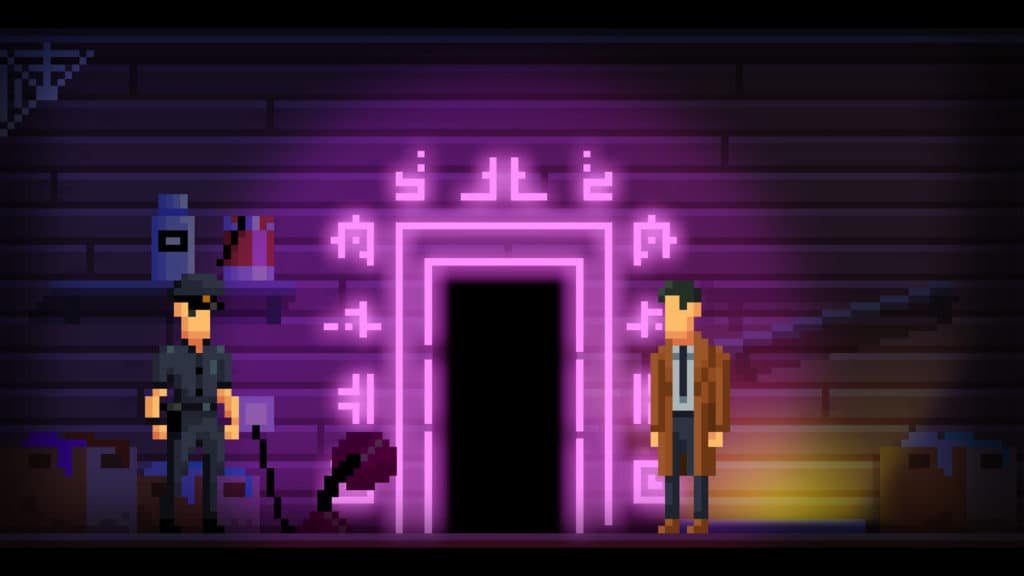 Making pop-cultural references in your work is a dangerous game, because people will either love it, or they’ll hate it — either because they don’t like the references, or they don’t like the act of constantly making references itself. The Darkside Detective references a lot of things, including The Simpsons, other video games, and fantasy and sci-fi tropes, but it’s all stuff that I like very much, so I didn’t mind. It also, if not exactly breaks, deliberately walks into the fourth wall quite often, though it gets almost all of this out of its system during the first case.

This kind of thing is often used as a distraction from everything else being quite bad; wave Terry Pratchett around in one hand and the audience won’t notice the magician is fucking up his entire trick in the other. Luckily, The Darkside Detective is still a fun and engaging point and click puzzle game behind it all, with some satisfyingly logical solutions to eldritch mysteries — though, as is traditional with point and click puzzle games, there are several puzzles that make frustratingly little sense, and that you figure out through randomly combining things rather than being smart.

Also now traditional to point and click puzzle adventures is pixelart, and The Darkside Detective’s characters are surprisingly expressive for people with blank faces. Detective McQueen stands with slumped shoulders and hanging arms, a tired man whose work nobody takes seriously; his sidekick Officer Dooley stands upright, arms back and chest forward, because he is permanently energetic and optimistic. Together they solve a series of supernatural cases: a missing child, a haunted library, gremlins at the police station.

The cases are increasingly difficult. There are six in all, and each is almost a standalone, though some are loosely related. You access them from the files on McQueen’s office computer, and though The Darkside Detective is going to run you a few hours, this neatly compartmentalised system makes it ideal if you don’t have loads of time on your hands to mainline electronic entertainment (like the good old days before you moved in with anyone, and could spend 75% of every Saturday dead to the world).

Over the course of these, McQueen and Dooley run into the ghosts of Edgar Allan Poe and H. P. Lovecraft arguing over whose work is spookier, and a priest who’s well into extreme sports. Even the jokes that aren’t relying on references to things I like seemed to be written to appeal specifically to my sense of humour: a newspaper with the headline ‘MAYOR POINTS OFF CAMERA over a picture of same; a father who says he doesn’t have many dealings with his young daughter because ‘she has a limited conversation pool’; the fact that Dooley has the same earnest concerns about being on the robots’ good side for when they overthrow humanity that I do (and which lead me to thank Siri whenever they perform a task for me). Dooley also runs a conspiracy theory website called Doolluminati.com. I just. I love it.

But this will also, I suspect, be the most polarising thing about The Darkside Detective. If it doesn’t match your sense of humour or interests, you’ll find it hard to get through all the elbow-nudging to reach the enjoyable puzzler underneath. And that would be a shame.