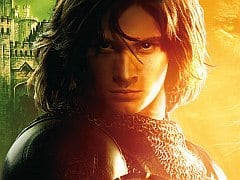 The Chronicles Of Narnia: Prince Caspian is the game of the movie of the book that was the sequel to The Lion, The Witch And The Wardrobe. This time we find Peter, Susan, Edmund and Lucy returning to Narnia, only to discover that hundreds of years have passed and the place is not quite how they remember it.

Cue more exploratory adventuring as the Pevensie siblings set out to once again right the wrongs that have been done to the Narnians and make a few new friends (and rediscover the odd old one) in the process. Fans of the previous Narnia title, The Lion The Witch And The Wardrobe, will know what to expect – plenty of exploration, loads of colourful characters, a spot of puzzle-solving and oodles of combat involving literally hundreds of characters on the screen at one time.

The game, like the movie, is pitched primary at children, and as such the gameplay is hardly taxing. A very simple control system is used to move the characters around, with two buttons being used for all combat moves and a third serving to trigger all manner of context-sensitive happenings. The Wii remote is supported in the Wii version, offering numerous gesture-based controls, but these aren’t as well implemented as we’d have liked.

Players control either 2 or 4 characters at a time, depending on the level, and switching between them is a simple matter of tapping a button when standing next to them. Gameplay is fairly repetitive, requiring the same task or puzzle to be completed numerous times before the next stage or level can be accessed.

The only thing that might tax gamers slightly is the fact that it’s not always clear quite where the next task lies – an arrow on the radar which is supposed to help with direction actually seems to point the wrong way about 50% of the time, but you’ll quickly get used to ignoring this and just exploring the level for yourself.

The game is rated PG, presumably because a large part of it involves fighting and – ostensibly – killing bad guys. However, all the combat is totally blood-free, and should any of the main characters lose all their energy they simply reappear onscreen a few seconds later, none-the-worse for wear.

Because all the combat in the game can effectively be played by simply bashing buttons at random, younger gamers should have few problems with it, and they’ll be the audience who will be the most interested in taking control of the various different creatures and characters from the movie. The repetitive nature of some of the puzzles should also suit youngsters, as once they’ve figured out how to do something the first time, it’ll be easier for them next time around.

The graphics on the next-gen versions, as you’d expect, are pretty good, and the soundtrack is nicely atmospheric, particularly during the battle scenes. Plenty of movie clips have been included to set the scene between stages, however, it’s worth bearing in mind that these might spoil the film somewhat for those who haven’t seen it!

The characters are all detailed, as are the environments, which do a good job of recreating one person’s vision for the world of Narnia. Still not quite the same as seeing it on the big screen (or, for those with good imaginations, as reading the book) but a sound job nevertheless.

The press release for Prince Caspian states that the game offers fans ‘a magical world beyond anything they have seen before’. A slightly more accurate description would be ‘a magical world much like you saw in the last game, and indeed, in the multiple Lord Of The Rings games before it’. This is not necessarily a bad thing – but if you’re an adult who doesn’t get excited about repeatedly hitting the same two buttons to battle bad guys, or solving the same handful of incredibly simple puzzles time and time again, then there’s not a whole lot for you here.

That said, the co-op mode in this game gives two players the chance to clean up Narnia together, and this offers great opportunities for a little father/son, mother/daughter, bonding over the home console, which is never something to be sniffed at. You just probably won’t be tackling it solo, that’s all.

The Chronicles Of Narnia: Prince Caspian is a great looking title which should thrill younger gamers no end, particularly if they’re fans of the film. It’s easy to pick up, good fun to play and features some impressive battle scenes which – storyline aside – must be the biggest draw of the movie. There was a time when the only way kids could transport themselves to Narnia would be to bury themselves in the book and use their imagination… now you can do much the same thing with a joypad and widescreen TV. Librarians of the world watch and weep!

The Chronicles Of Narnia: Prince Caspian is a great looking title which should thrill younger gamers no end, particularly if they're fans of the film.
8 Epic battle scenes Extremely simple combat system Great co-op option A tad repetitive at times

The Chronicles of Narnia: Prince Caspian

The Chronicles of Narnia: Prince Caspian