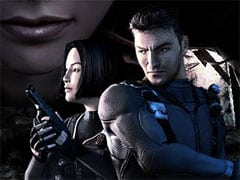 Poor old Gabe Logan is one of Sony’s most underrated stars. The gadget-obsessed action-hero with the voice of the Marlboro cowboy has always lived in the shadow of a certain Solid Snake. In fact, the pair’s careers of late have followed rather similar paths. After some fine appearances on the first PlayStation, and a couple of rather less impressive sequels, gaming’s most hard-boiled good guys have enjoyed a return to form in with their recent PSP performances. It could even be argued that Syphon Filter: Dark Mirror is one of the handheld’s best releases, so this time the pressure is really on.

After a lifetime in Snake’s shadow, and now in Dark Mirror’s, Logan has chosen to cast his own, and if you choose to bath in its darkness, you’re going find yourself lost in a absolutely brilliant, if slightly familiar adventure. After a worryingly recognizable training section, the action quickly heats up, and hours can turn into minutes as you ride over the shoulder of Syphon Filter’s terminally angry lead. Logan’s Shadow is no radical departure for the series. You can expect a classic third-person action shooter based around hi-tech weaponry, subterfuge and double-crosses from within the secrecy-shrouded world of counter terrorism, but it is undeniably hugely enjoyable.

There’s a convoluted plot typical of the series reworked into something quite wonderful by scriptwriter Greg Rucka, who has penned the adventures of Batman among others, and plenty of familiar faces from previous games return, resulting in a surprising increase in witty banter, tension, and foul language. While this may all sound of little interest with regard to the quality of the game, Logan’s Shadow’s plot and character make it substantially more involving than previous iterations, which always had such confusing narratives it was all too easy to lose sense of the side you were on, and the motivations for your actions.

Most important here though is the action, and again it is terrific. Where Syphon Filter succeeds is exactly where Kane and Lynch recently failed. While the latter made a mess of juggling stealth, cover-firing and ‘run and gun’ styles, Logan’s Shadow keeps them all in the air with grace, and could likely ride a unicycle at the same time. You’ll certainly spend most of your time shooting boldly from the open at a safe distance, methodically advancing, but the stealth elements are blended into the levels fairly seamlessly, without the need for too many explicitly exclusive sections focusing on tip toeing through the shadows, with weapons locked.

There are also a few new additions with regard to gunplay. Snapping to and shooting from cover is now considerably developed, and a basic blind firing system works very well to suppress the enemy. Taking hostages allows you to use enemies as human shields, and a smattering of new weaponry allows for a little more variation. Occasionally the accuracy of the targeting reticule feels like a joke at your expense, and after the satisfying efficiency of CoD4’s weapons, the amount of damage your enemies can endure in Logan’s Shadow seems decidedly dated.

The fact that some of the best elements of Logan’s Shadow are those that remain unchanged is perhaps indicative of the quality of Dark Mirror on the PSP. As with the first handheld outing for Gabe, the controls here are superb, especially considering the rather limited button set of Sony’s pocket-sized console. While the analogue nub and facia buttons work like the twin stick control of most modern console first-person shooters, the d-pad and two shoulder buttons handle weapon selection, the game’s various vision enhancing goggles, locking, stealth, climbing, the brilliant zipline and a whole host of other options, right down to different methods for door breaching, and somehow, they do so with flawless simplicity.

If that wasn’t enough, Gabe can now explore vast underwater sections, and even shoot and hide deep beneath the surface, and while the necessarily cumbersome nature of the submerged sections can feel frustrating at times, they add a great new depth to the series, if you’ll pardon the pun. Sniping an enemy patrolling a dock, as you lurk inches beneath him is thrilling even after dozens of similar kills.

If there are reasons to complain about Dark Mirror, they lie with the enemy AI. Insofar as moving and working together, by handheld standards the intelligence and behaviour of your gun toting rivals is quite impressive, but their trigger fingers are clearly broken, or their gun sights need some work. Their accuracy is laughable in the opening stages of the game, and you quickly realise that you can usually charge at most of your rivals without fear of injury. Then, in later stages they suddenly develop super human accuracy, though the more challenging missions in Logan’s Shadow are without doubt the more enjoyable.

After you’re done with the substantial single-player game, there’s also a sizeable multiplayer mode, which is smooth and responsive, that includes several maps from Dark Mirror. Considering the rather serious tone and melodramatic nature of Syphon Filter, it’s also great fun and surprisingly giggle-inducing when played with a friend.

Most noteworthy of all of Logan’s Shadow’s attributes though, are the quite stunning visuals. It really does trump even the snazziest console versions of the game, and the clarity and richness of the cut-scenes is near unrivalled on the PSP. From the water to the skin tones, the detail is exceptional, and there is a genuinely excellent musical score that adds atmosphere and mood with aplomb. The long-standing Syphon Filter style also returns, which somehow manages to make a game dominated by the colour grey appear vibrant and appealing.

Overall, Logan’s Shadow is slick, well produced, and involving, and most importantly it is very hard to put down. The third-person shooter was once one of gaming’s most prolific genres, and while it’s now nowhere near extinction, great new examples are becoming a rare breed indeed. If the main criticism is that Bend Studio’s latest is a little too close to the brilliant Dark Mirror, there is barely a reason to begrudge this game. As great PSP action games go, this should be fairly near to the top of any list.

Logan's Shadow is slick, well produced, and involving, and most importantly it is very hard to put down. As great PSP action games go, this should be fairly near to the top of any list.
8 Great visuals Controls work well Action packed Enemy AI isn't great

More action as Logan returns for another PSP adventure.

More action as Logan returns for another PSP adventure.