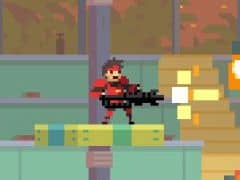 Described by the developers as Contra meets Braid, in practice Super Time Force can also be pegged as infuriating and frustrating. That doesn’t mean it’s a bust, however: quite the opposite. It’s a clever reversal of genre norms, a time-rewind mechanism ensuring death isn’t the end. It might not even be the beginning.

When you die fighting time-travelling alien scum (one hit kills), you can use one of 30 “time outs” to have another go. The twist here is that your last self stays on the battlefield. So while you’ve gone back in time, any other versions of you play out their fates, until they either die, or their future is changed (by you killing their assailant). At this point you can then converge all timelines into one, ‘stacking’ your characters into a multi-purpose death machine. Simple.

If ever there was a game where the phrase ‘you’re playing it wrong’ is probably accurate, it’s this. The pixel art, flying bullets and multiple characters (each with their own weapons, strengths and weaknesses) screams old-school bullet fest. This isn’t the case. It looks like a shooter, but plays like a strategy title: screen position is key. Characters aren’t one-man armies; they’re pieces to be set around an ever-evolving board. You’ve only got 60 seconds (at first) to complete the stage: efficient rewinding and refining is all-important.

Once this clicks you’ll be rewinding constantly, even when your other selves haven’t died, placing different character types around the level as tactics dictate. A shield-wielding knight here, a sniper there, a bullet-spraying bro on coverage, a dinosaur on overwatch. There are also collectibles and slow-motion powerups to consider. Learning how – and when – to use everything at your disposal is the key to success, and there is a definite sense of accomplishment to finishing a stage.

It’s a brilliant concept, executed well, and the variety in the stages and characters is excellent. It can feel overly attritional, with minor control issues (diagonal shooting is a pain) and seemingly-wonky collision detection causing annoyance. That said, Super Time Force is still worth checking out.

It can be frustrating, but Super Time Force is a brilliant concept, executed well.
7 Unraveling the stages is satisfying. Rewind mechanic is well executed. Can be frustrating. Controls will annoy some.

“What would happen if Braid and Contra had a party!”, it says…

“What would happen if Braid and Contra had a party!”, it says…