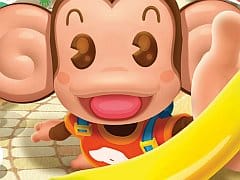 When Nintendo’s senior director of corporate communications, Charlie Scibetta, said the 3DS would help quash the perception of the company as a haven for casual gamers, I think we’re safe to think he wasn’t using Super Monkey Ball 3D as an example. Older fans will remember when the game was released as a launch title for the Nintendo GameCube. Despite the cutesy monkey approach, it used elements that made similar titles like Marble Madness as good as they were difficult.

The nail-biting quality of the series’ earlier games guaranteed that Super Monkey Ball wasn’t born to be fodder for the casual player to whip out on bus commutes. But Super Monkey Ball 3D has been over-simplified in a way that is unlikely to appeal to even that casual palate.

The aim, as always, is to navigate an environment and collect bananas without rolling off a ledge and out of bounds. The player controls the angle of tilt, carefully funnelling the Monkey Ball down winding paths to reach the objective before the minute-long countdown expires. But the game’s level designers have approached this 3DS descendent as if its fanbase still requires training wheels.

The skill typically required to control the ball has been reduced thanks to a decision to liberally sprinkle levels with stabilising indents in the floor, and with barriers that keep the spherical simian from rolling out of bounds. Even the approach to raising difficulty in later levels feels shallower than what most players are used to, focusing less on challenge and more on a combination of basic obstructions and time management. You’re faced with an excess of bumpers that lob you off the board and sand that slows you down – elements that only bog down the gameplay rather than ramping up the difficulty.

You’re given the choice to steer your character with either the C-Pad or the built-in gyroscopic sensor -rough equivalents to the thumbstick controls of the GameCube and the gyro wiggling of the Wii. Both are surprisingly adept and yet hampered by their own issues. Using the pad will give you an impressive amount of control over the ball, but this further reduces the challenge of a game that’s already remarkably simple. The gyroscope reacts to your waggles reliably enough but ends up interfering with the 3D: as you wave the handheld around, it’s impossible to maintain that sweet spot that gives the illusion of depth.

Even when regarded as a simple pick-up-and-play title, this doesn’t have enough content to hold the attention of casual players, failing to maintain the mini-games mentality it’s so clearly striving for. The traditional Monkey Ball mode lasts roughly 80 minutes, with eight worlds that each consist of 10 one-minute levels. The short-burst stages rarely require multiple playthroughs to collect all the available bananas, so there’s little incentive to replay select worlds. In the absence of any discernible replay value, a brief game seems even briefer.

Padding out the rest of the package are two additional modes, Monkey Fight and Monkey Race – essentially miniaturised clones of Smash Brothers and Mario Kart, respectively. Generally speaking Monkey Race is a pale imitation of the kart game, offering only a generic selection of power-ups and weaponry within a race marred by pacing issues. The slightest collision will send your vehicle spinning to a stop, a problem worsened by areas on the track designed specifically to slow you down.

The Smash Bros-alike mode has you competing in a four-player fight to pick up the most bananas, and to shake remaining bananas out of your opponents. Like Race it’s an oddly generic interpretation of a classic. Fight has you button-mashing your way to a hopeful victory but ultimately feels too random to really comprehend. Enemies often seem to ignore you until the crucial last seconds when they bombard you with attacks, and at other times the controls don’t feel particularly responsive.

These two modes are the also-rans of Super Monkey Ball – superfluous mini-games that often don’t quite work – but even the main attraction veers in a direction that never showcases what originally made the series successful. Regardless of the new platform, this is a listless take on a game that should be – and has previously been – anything but.

Regardless of the new platform, this is a listless take on a game that should be – and has previously been – anything but.
5 C-Pad works well with gameplay poor mini-games Little content 3D doesn't function with gyroscopic controls

The first 3D installment of the Super Monkey Ball franchise.

The first 3D installment of the Super Monkey Ball franchise.