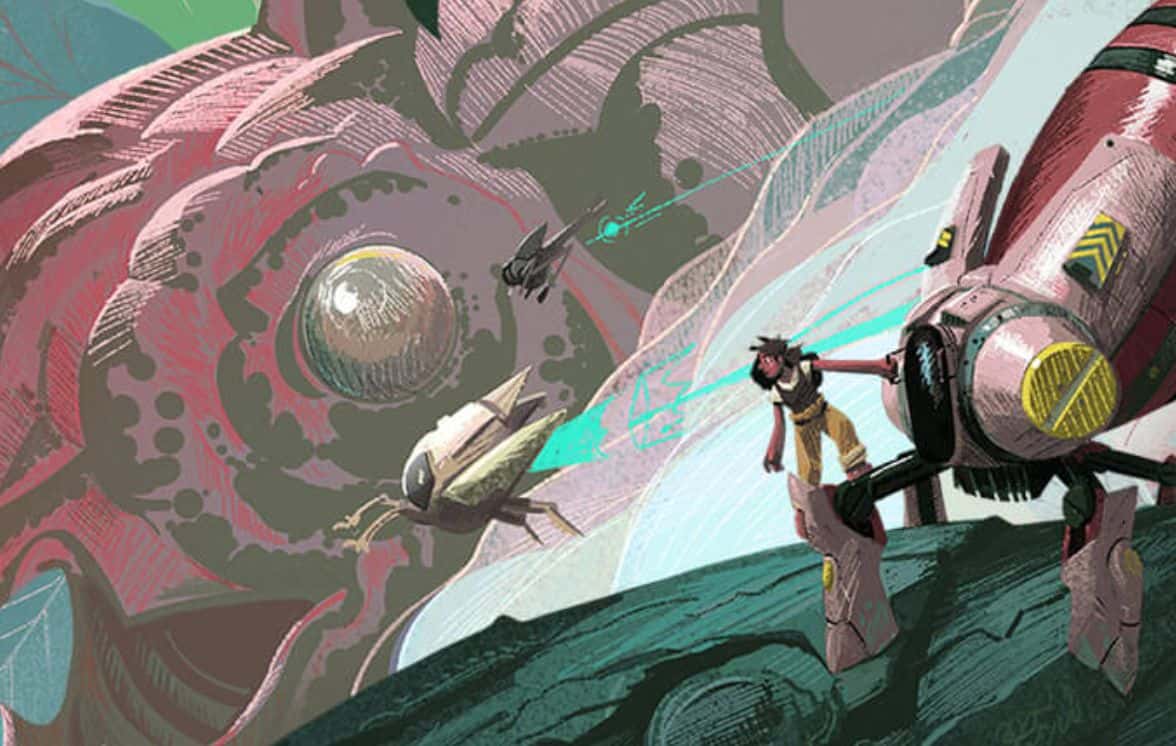 Stonefly tells the story of Annika, an amateur inventor. She lives with her father, an inventor who long ago shed his amateur status but whose passion has refused to stall. We find the pair at home, with Annika handing him tools while he tinkers beneath a huge metal shell. She has a knack for this sort of thing, her father says; “Years of listening to you yammer about engines is paying off,” she fires back. Their home bears a hint of the Kokiri, from The Legend of Zelda: Ocarina of Time; Annika’s bedroom, like Link’s, appears to have been carved out of a tree trunk. But the sappy sense of adventure that built up in the opening of that game—as though a thousand branching possibilities were about to bloom—is absent. Instead, we get something strange.

We’ll start with the elephant in the room—or, rather, the insect in the room. The heap being worked on is, in fact, a giant bug: a drivable insectoid mech, into which is slotted a hopeful human, for the purposes of exploration, battle, and, we can only guess, for chirring dolefully at sundown. As setups go, this is a winner; think Michael Bay with a kick of Kafka. But what about the people? Are they like the Minpins—those tiny, forest-dwelling folk from Roald Dahl’s story of the same name? Or are they regular-sized, in a world of giant foliage? One thing is for sure. Out there, amidst the motorways of bramble, are the real deal: bugs that scuttle of their own volition, powered by the juice of pure instinct, bugs whose mandibles are unmanned. 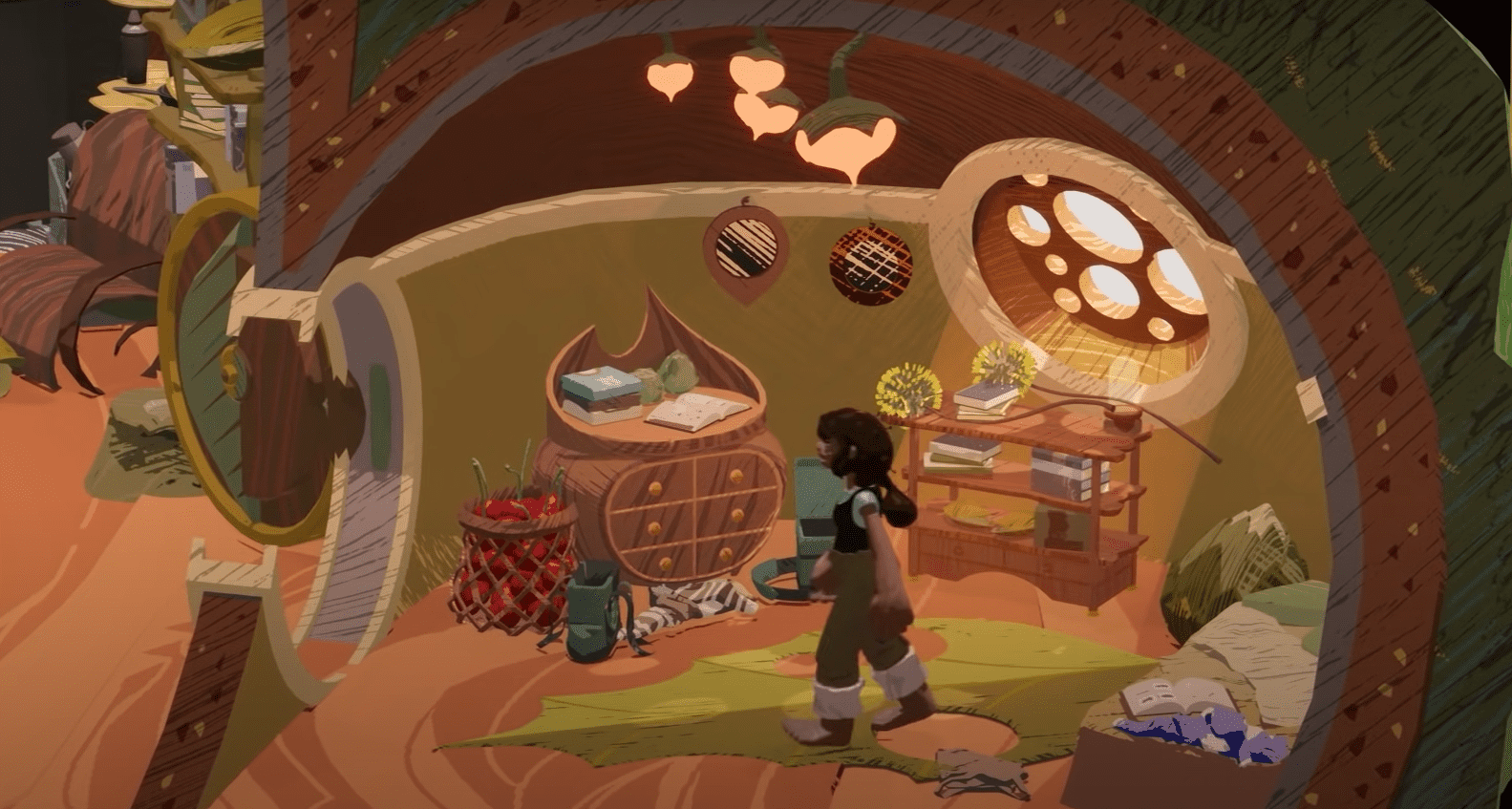 One night, Annika leaves the garage door open, loses her dad’s prize mech to a thief, and sets out in a clanking wreck to try and reclaim it. The developer of Stonefly is Flight School Studio, whose previous game Creature in the Well crammed pinball into the dank corridors of the dungeon crawler. (It was an energising prospect, though it paled next to the more chitinous Yoku’s Island Express, which took pinball and tilted toward the Metroidvania.) As a matter of general principle, I’m all for any attempt to jam one genre into another, better yet if you can smuggle it in, ricocheting off established boundaries and scoring with more than one audience. Stonefly takes the mech game—fans of which revere the art of the tune up, and the gradual tooling of one’s empowerment—and, rather than clip its wings, it folds them into the carapace of a platforming adventure.

The result is an odd brew, successful in fits and starts. First we have traversal: a matter of gliding from place to place, and, like a diver coming up for air, you dart groundwards and launch yourself up again, freshly defiant of gravity. There is little challenge in these sequences, challenge being an obstacle to the airy mood. You can catch updraughts and flurry to higher reaches, and, should you lose your sense of direction, you can summon a glowing gust of fireflies to lead the way to your next objective. This is a pleasant way to mislay a few hours. The art direction, by Adam Volker, depicts the forest as a series of patterned prints; at one point, I was surrounded by a blaze of autumn leaves, as though Annika were crawling within the coppery folds of a bad shirt. Combined with the dreamy score, by Dario Rojo Guerra, with its stridulating synth and woody percussion, it’s as if you’re drifting through an acrylic cartoon, in which nature were no less striking for being held in quote marks. 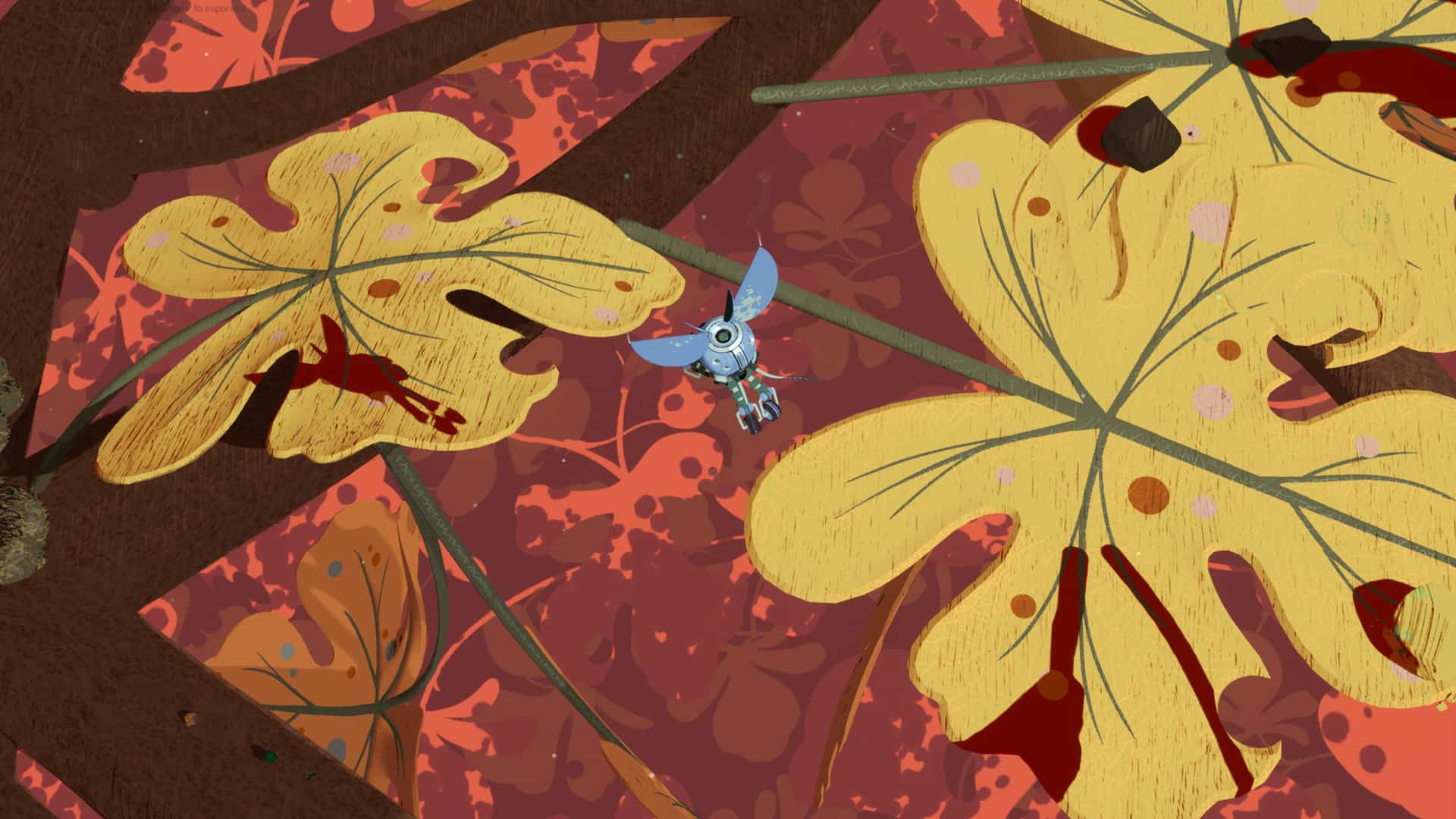 All this wandering isn’t strewn with loot so much as it is lyrically punctuated by it. There is piotite, fawnicle, and dailium; loranite, limodot, and dinotite; there are keyhole clamps and pressure molds, to say nothing of neutron epoxies and pebble rivets. As you press a button and pluck the resources from your surrounds, these wondrous words swarm past. It’s exactly how I like my loot. If it’s to be nonsensical—and in most games is—why not have it sound like Nabokov? The upgrades (hull durability, jump height, mining speed, etc.) are a standard slew, and if I never felt like an inventor, crafting a specialised critter to my own personal spec, I was more than happy to feel like a bug.

Where Stonefly is at its weakest is in combat, wherein I feel less like a bug—a creature of grace and pace—and more like something soldered together by those steel-addled enthusiasts that throng the theatres of Robot Wars. It is a fumbly business, not helped by a camera, set far back, that occasionally obscures the action. You must bomb your opponents from above and, when they are on their back, waft them off the edge with a beat of your wings. When it worked, it seemed as if I had steered chaos in my favour, as opposed to having piloted a machine of precision. Still, it’s to Flight School Studio’s credit that, though the clashes at the game’s core left me underwhelmed, the whole thing didn’t feel hollowed-out. This is down to Annika, who sits at its heart and drives it on. 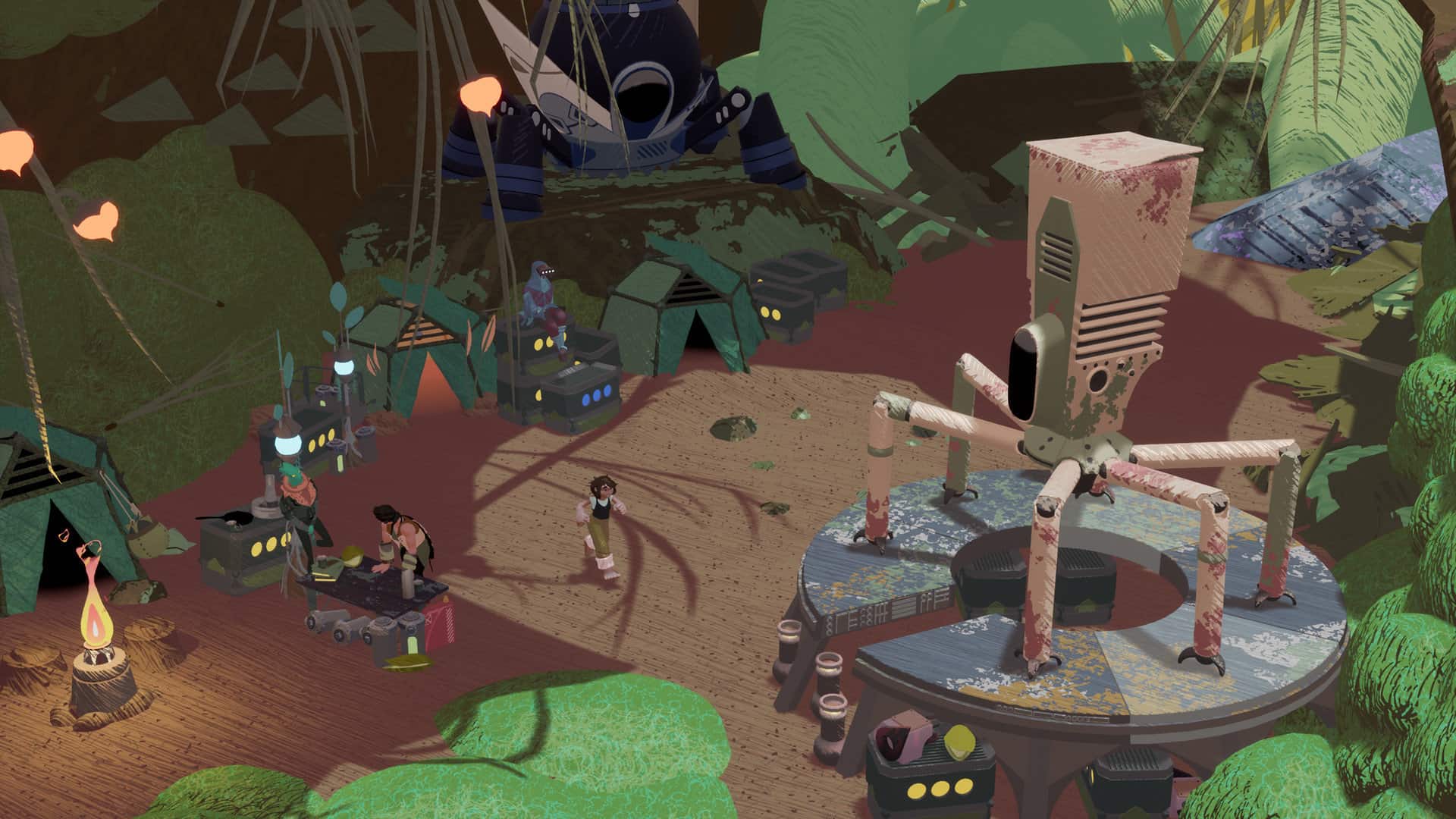 Near the beginning, she falls in with the Acorn Corps, a group of mercenaries who operate mechs of their own. After each mission, she goes back to their camp to upgrade her layout, talk to her allies, and sleep—during which we see pictures of her dreams. It is a curious touch, filling her nights with flashes of fear, sorrow, and hope. At first, I worried that this may turn out to be a creaky conceit; she ventures out, looking for something lost, and winds up finding herself. Only, she doesn’t. We know who she is right from the start of Stonefly, and so does she; what she’s doing is gathering up the dailium from her dreams and getting to work. More than just her mech is becoming stronger.

Available on: Nintendo Switch [reviewed on], PlayStation 4, and Xbox One

It’s to Flight School Studio’s credit that, though the clashes at the game’s core left me underwhelmed, the whole thing didn’t feel hollowed-out. This is down to Annika, who sits at its heart and drives it on.
6 Exploration Combat Art and music 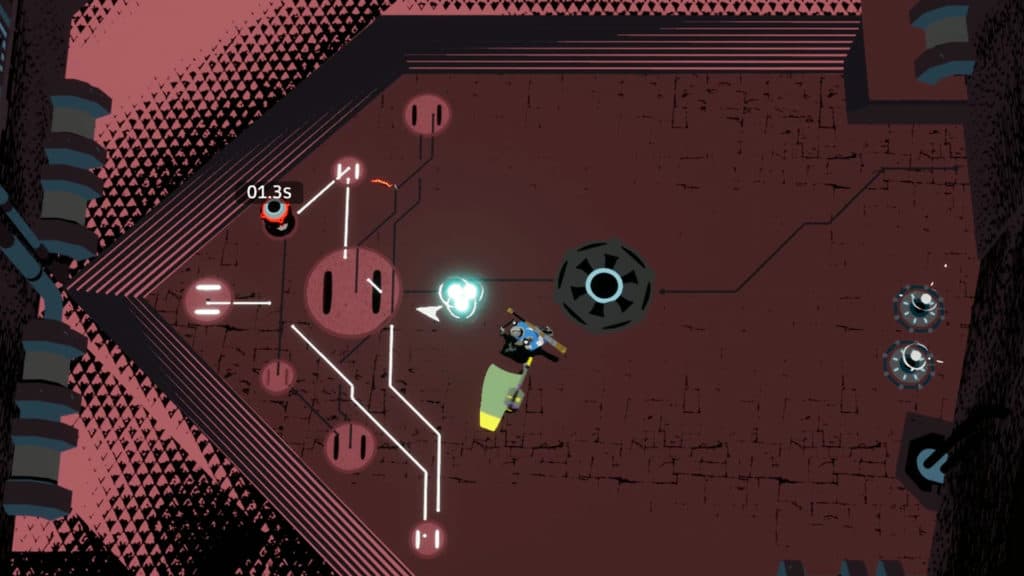 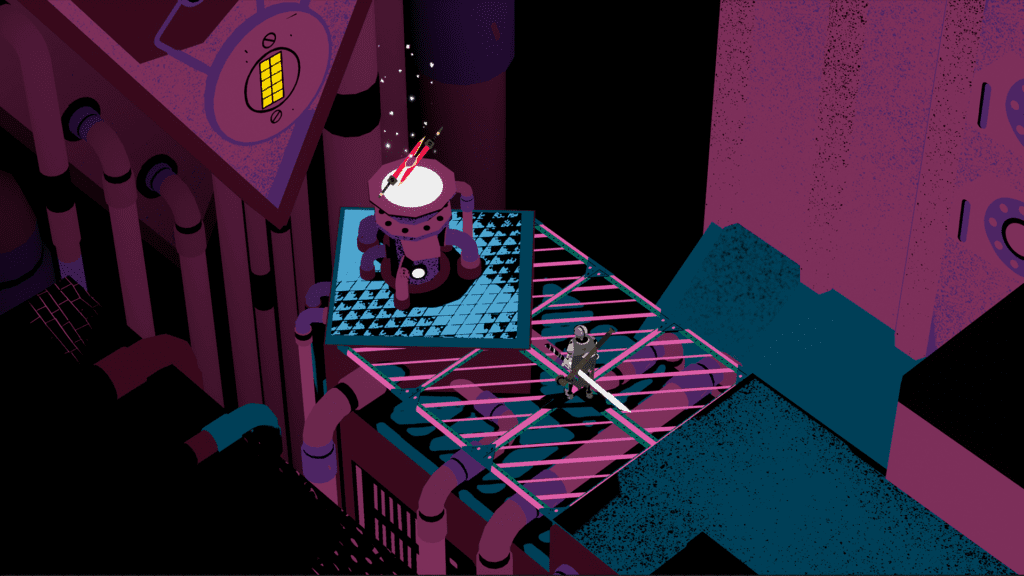 Creature in the Well turns every room into a pinball table 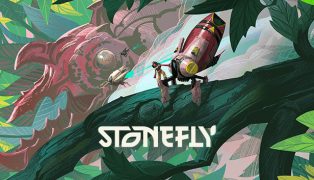 Harness the wind and soar through the wilderness of Stonefly, a chill…

Harness the wind and soar through the wilderness of Stonefly, a chill…