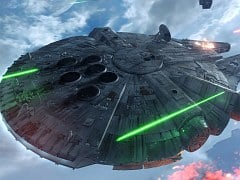 Star Wars Battlefront is unquestionably one of the most authentic and well-realised interpretations of George Lucas’ original trilogy ever made. It’s also a huge missed opportunity. Fans of Star Wars circa 77-83 will get a huge kick out of what DICE has achieved here, and even those not that keen on the antics of Vader and co can still appreciate the level of effort which has been (lovingly) poured into Battlefront. But soon even the most ardent fans will find that, after the spectacle starts to fade, the game’s underpinnings don’t really support extended play, and a lack of appropriate modes hinders the entire experience.

In a way, the Battlefront beta has worked against the full release. While on its own a superb demonstration of just how well DICE has reworked many elements of the Star Wars universe into video game form, taken now it seems a bit like watching all the many TV spots, trailers, adverts, promos, etc for an upcoming blockbuster, then getting into the theatre and realising you’ve seen it all. The best mode (Walker Assault) and the second best map (Hoth) have already been extensively showcased. Sadly, almost everything else on offer doesn’t hit these heights.

There is still joy in the final product, especially in the early going. Battlefront offers something that you simply cannot get elsewhere: not at this scale, not at this fidelity, not with these production values. The 40-player, objective-based skirmishes encapsulate the absolute essence of Star Wars. I’ve talked about it at length here, but in short if that original trilogy is about screaming speed, high intensity, against-all-odds heroism, and the push and pull of two oppositional forces, then DICE has it nailed.

Battlefront is full of moments which make you feel like you’re in the movies (as is the entire point, but Star Wars games hardly have a stellar reputation in following through here). Picking up a token on the battlefield and spawning as Darth Vader or Luke Skywalker (why you’d choose anyone else, with their puny blasters or Force electricity, is beyond me) and cutting a swathe through enemy forces is simply wonderful, an absolutely pure power fantasy made all the more appealing by watching human players turn and flee in terror. It’s particularly pleasing to see Darth Vader enter the battlefield, flashing around like an asthmatic Death, given how de-fanged he’s been made since Empire. Hearing the Imperial march cue and seeing him stride into battle produces the same sense of awe as it did when you were a kid, and if for nothing else then this alone makes Battlefront a minor triumph.

So too is there excellence in a great many other interpretations of the form, from the excellent audio design to the feeling of speed when whooshing around on a speeder bike, helped no end by the Swedish developer’s technical prowess. Although general image quality on Xbox One isn’t stunning – environments are often very jagged, they ‘shimmer’, and some interiors look like the textures haven’t quite popped in – on the whole the team’s art direction more than makes up for these issues. Battlefront takes the franchise’s iconic motifs and renders them as vast, dense killing fields, beautifully lit (if a little harsh in places) and boasting an impressive amount of geography on screen at once.

The Endor map is the best in the game because it combines Star Wars’ legendary production design with DICE’s own map-making skill. There’s the Ewok (you can’t kill them, I tried) treehouses, the blast-door fronted imperial bunkers, the AT-ST’s stomping around. But there’s also dense foliage to fight through, sniping spots to take up, and stealthy sideways approaches to your targets: it feels like you’re fighting through something tangible, rather than across something; less like a camera strapped to a gun and more like a Stormtrooper getting thwacked in the face with a branch. At night, this map is awesome, in the purest possible sense: high above the ground there’s red laser fire everywhere, in the distance the terrifying ‘whoomp’ of a thermal imploder, huge explosions, troops fighting and dying, and perhaps the flash of a green lightsaber brightening a path below. John Williams’ score would be playing in your head, if it wasn’t playing from your sound system already.

Give it a few hours, however, and the allure of this spectacle begins to fade. Soon, you’re left to reckon with the fact that while Battlefront excels in making real those dreams of fighting Darth Vader on Hoth, it doesn’t nail the rather more prosaic elements of first person shooters.

Like Battlefield (and every other shooter) Battlefront has a rank-and-unlock system. Points you score in games are converted into credits, and you can use these to buy more gear or adjust the way you look. Certain weapons and ‘cards’ (cooldown-governed special abilities like jetpacks and grenades, which are organised into ‘hands’ and taken into battle) are locked to higher levels, so – as ever – you’re encouraged to climb the ladder, playing in game after game to get hold of new and supposedly better equipment.

There are plenty of weapons to unlock, but sadly they rarely satisfy, lacking (ironically) in force, feeling too weedy and seeming to take too long to hit their target. These firearms are energy-based, and there are different types to choose from – single-shot, marksman rifles, the blasters you all know and love from the movies – but by and large they lack kick, with some having the worst time-to-kill since Matthew McConaughey.

The counter-argument is that the better weapons are unlocked later down the line, and while this may be true, the simple fact is you’ve still got to use the other guns to unlock better ones, and with shooting being so average you may feel exhausted by the time you get them. In fact, fatigue is Battlefront’s main problem. Its two best modes, Walker Assault and the reverse-tug-of-war alike Supremacy, where you have to push the other team back, capturing their nodes as you do so, only have four maps each. And while some of these are absolute belters, there’s no denying that when Sorosuub Centroplex comes round in rotation, again, it starts to dawn that there’s not all that much to Battlefront.

There are plenty of gametypes, but beyond the two previously mentioned – as well as the enjoyable if limited Fighter Squadron (dogfights over a planet’s surface) and Drop Zone (Headquarters, basically) – the rest only seem to reinforce Battlefront’s negative aspects. Blast (team deathmatch) and Droid Run (a domination-alike) suffer for the reasons listed above, while Hero Hunt (kill the character to become the character) may as well be called Kill Stealing: the Game. The absolute nadir is Heroes vs Villains, where you and your team pick which hero character to be and wade into battle against your opposite numbers, like if the Emperor and Darth Vader decided to kick off in a space Wetherspoons. It’s weak, and mitigates the primary power of the characters: that you can only rarely play as them.

These modes simply don’t fit this experience, run ‘n’ gun fests which the combat wasn’t built for. To make these gametypes work, Battlefront needed an overarching campaign, something to add weight to the rather transient nature of your matches. It also needed better aerial combat: in general the maps are too small for it to really work, with players zooming from one end of the map before making a hard turn so they don’t get counted out. ‘Missions’ mode hints at what could have been, with speeder bike chases and dogfights down Beggar’s Canyon, and given how enjoyable some of these missions are, the people clamouring for a single-player campaign may find themselves even more disappointed.

Star Wars Battlefront, then, is one of the best experiences of the year, if only for a short while. Completionists may stay with it to unlock figures for the in-game diorama which shows how many challenges you’ve completed, but others will find their interest has waned long before that. Too limited in its maps and modes to keep people hooked, it will nevertheless provide enough fun to jump onto once in a while, hear that famous score and maybe take down an AT-AT. Those who wanted a Battlefront III, however, will have to wait a little while longer.

Thrills initially, but soon reveals itself to be rather limited.
7 Some great modes Excellent attention to detail Most other game modes have little to offer Shooting often feels too weak