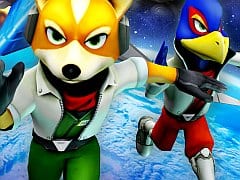 As I mentioned (well, ranted) fairly recently, Star Wars is dead to me. Among other grievances, I’m consistently annoyed by George Lucas’s habit of fixing things that aren’t broken. Not content with giving us the execrable prequel trilogy, he insists on revisiting the old films and making horrible, needless changes. Just recently, he committed his worst crime to date, deftly mutilating the climax to Return of the Jedi for its Blu-ray release.

Thankfully Nintendo employs a lighter touch in revisiting its past space operas. If Lucas is an abusive parent (and he bloody well is), Nintendo is the Dad who goes AWOL for long, unexplained periods. For years fans have been crying out for a new Star Fox game, but in the meantime they’ll have to make do with this: a 3DS remake of Fox McCloud’s N64 outing, often regarded as his finest hour.

Anyone who played the 1997 original will be instantly at home here, as the core gameplay has been left untouched. For the most part Star Fox 64 3D is an on-rails shooter, affording you a limited area of free movement as you fly your pointy Arwing through a sci-fi battlefield, towards the inevitable boss fight at the end. You can weave about the screen and pull off fancy loop-the-loops – or a now-notorious barrel roll – but your overall path is leashed to a set course. The only exceptions come in the form of occasional arena-like stages that allow for 360 degree movement, but even here there’s an emphasis on rapid blasting, rather than elegant dogfighting.

By today’s standards, the endless laser-spamming may seem to lack finesse. Star Fox 64 3D isn’t a hard game, and if you’re not bothered about notching up a high score it’s quite possible to tear through the campaign in little more than an hour; I reached the end credits on my first go without losing a life until the last boss. There’s a branching level structure in place that ensures you’ll only ever see seven of the fifteen available planets on any one playthrough, but even so it won’t take long for you to visit the lot.

But here’s the thing: Star Fox is the kind of game that’s been built with repeat, score-based play in mind. And unlike the majority of score-attack games that have characterised the 3DS line-up to date, this has the charm and easy gratification to make that an appetising prospect. The bite-sized missions are a snug fit for commuter play, and once you start trying to earn medals – awarded for hitting set kill quotas on each stage – the game reveals a surprisingly steep level of challenge.

Under the circumstances, the omission of online leaderboards feels utterly unforgiveable on Nintendo’s part – especially as they’ve seen fit to include a dedicated Score Attack mode. On a similar note, there’s no online support for the new multiplayer offering, which is something of a shame. The original N64 splitscreen allowed you to mess about in the Landmaster tank that crops up in certain campaign stages, but here you’re restricted to the skies – not that this is a particular problem, as the Arwings are more fun to control anyway.

Four-player deathmatch is served up with a selection of scoring variations, but the main addition is a new set of Mario Kart-style power-ups to replace the basic Power Bomb. Better still, the camera at the top of the 3DS is used to provide a live feed of your opponents’ faces, allowing you to watch them gurn when you blow them out of the sky. It’s a nice feature, but as you’ll invariably be playing over WiFi against someone sitting right next to you, the novelty is somewhat diluted. Still, at least you’ll only need one copy of the game between you, thanks to the use of the Download Play system.

The lack of online support is particularly annoying, as elsewhere Nintendo has made sound use of the 3DS’s capabilities. The C-Pad affords you excellent, precise handling of your craft, and while it’s possible to pilot your Arwing using gyro-based controls, you can thankfully ignore the option altogether; while the effect is actually surprisingly subtle, it still feels decidedly unnatural when you steer your ship by lugging the entire console from side to side. I’m yet to be convinced that gyro control is anything more than a gimmick, at least as far as games like these are concerned; Nintendo clearly disagrees, as it’s gone to the trouble of providing a rebalanced campaign for gamers who do give it a go – although the actual changes appear to be almost negligible.

The real success story here lies with the game’s refreshed appearance. The entire game has been rebuilt with a new engine, and the results are immediately impressive. Visually, Star Fox 64 3D is a busy game, with lasers, missiles and enemy ships criss-crossing the screen, but even during the most hectic battles the framerate barely falters. The re-drawn planets provide striking and exciting backdrops, especially when you’re flying over the toxic gloop of Zoness or the fire planet Solar, which now has that “embers floating on the wind” effect that we all love so much.

But the real stars here are the Arwings themselves, and to a lesser extent the foes that you blow to smithereens along your path to victory. I’ve never been massively swayed by the characters in Star Fox, and I still feel that Fox and co lack the mystical design ingredients that make Mario and Link so memorable. The Arwings, however, are a different story. They’re so simple, and yet there’s something immediately iconic about their angular appearance. They seem fresh and futuristic, and yet their blockiness recalls the earliest days of gaming. There’s nothing else in the Nintendo universe that looks like them.

The strength of Star Fox’s aesthetic counts for a lot, as it distracts you from the rather simplistic rail shooter that lies underneath. Juxtaposed with the recent resurrection of Ocarina of Time, Star Fox 64 3D is no masterpiece. All the same, it’s one of the best-looking games on the platform, and a respectful restoration that will please the fans. If George Lucas would only follow Nintendo’s example, the world would be a happier place.

Star Fox 64 3D is no masterpiece. All the same, it's one of the best-looking games on the platform, and a respectful restoration that will please the fans.
8 Looks superb Feels well-suited to the 3DS Beneath the charm, it's a very basic game Lack of online support is deplorable

The N64 shooter is given new life in 3D.

The N64 shooter is given new life in 3D.