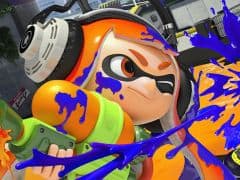 Update: Splatoon has been out for over a week now, and Steve has had time to sit down with the retail copy of the game and see how it fares in the wild. Below are his thoughts on the game as it plays now, with his original review below that.

Not much has changed since I played Splatoon’s pre-release review code: it’s still a beautiful, intricate, yet undercooked offering that ultimately disappoints precisely because it often thrills. Online, in particular, there’s a great deal of fun to be had – setting up little ad-hoc fireteams and splatting the world is a great baseline to build on – and the natural confluence of weapons and tactics (rollers for covering the world, more traditional weapons for covering fire, etc) is superb.

Play for any amount of time, however, and it becomes clear that Splatoon, as it is now, has the depth of the puddles of ink it spills. There’s the illusion of depth, certainly, thanks to multiple unlocks for everything from weapons to perks, with buffs for all. But with so few modes and maps, often it feels as if you’re playing exactly the same games over and over.

Post-launch support has begun, with more to come, and is free. But at the moment, Splatoon doesn’t have quite enough to sustain prolonged interest. There is brilliance here: the natural push and pull of the stages, exacerbated by the short game time. The thrill of seeing ground being gained, and the terror of watching someone carve through your carefully-laid ink, displayed with gut-wrenching minimalism via the GamePad’s HUD. Secondary weapons, such as those that spurt out ink like an errant hose or cause a shower of goo to fall, are a delight to use. Splatoon can be intensely tactical, and its end-of-battle results screen after a close match is genuinely tense. But these moments can’t overcome the thinness of Splatoon’s package.

Splatoon feels like a classic Nintendo game, albeit one released for Sega’s Dreamcast in some sort of bizarro-world alternate past. Its central mechanic – using ink, fired from various weapons, to both kill enemies and facilitate movement around the stages – is as satisfying in practice as it is in concept, as with the best Nintendo titles. And it boasts the sort of sky blues and funked-out aesthetic and soundtrack that became a hallmark of some of the Dreamcast’s most memorable hits.

The ink is integral to the experience: in fact it is the experience. It’s both a weapon and a shield, a place to fight and a place to hide. It’s a mire if you’re stuck in your opponent’s ink, yet a source of unmatched mobility if you’re in your own. It’s cyclical, and as elegant as it is fun to mess around with. Each element feeds into others in a natural way, perhaps best encompassed by the seemingly mundane act of reloading. It’s handled here not with a change of magazine but via submersion in the ink, which also makes movement much faster. It’s a great defensive tool, but it also leaves you vulnerable – even if you’re technically ‘reloaded’, you can’t fire the ink gun until you leave the relative safety of the goo. Almost every surface can be used for attack and defence, and in its best moments Splatoon gives players the tools to choose their strategy on the fly.

There’s a coherence, a feeling of craft, to Splatoon’s central mechanics that draws to mind that oft-quoted Nintendo maxim of having fun in an empty room. The simple act of firing your gun changes the scenery not by destroying it, but instead covering it: adaptation, rather than annihilation. The ink is then used to navigate the world: a tap of a button sees players enter squid form, enabling them to climb sheer wall faces and overcome the various obstacles in their way, mainly in the form of floating platforms that are clambered on and across. Much has been made of Splatoon being a shooter, for want of a better word, but in the campaign at least it’s more a platformer with shooter elements.

This distinction is key, because it’s at the heart of Splatoon’s main (offline) failing: that while the platforming is fairly fun in and of itself, helped by how good it feels to use the ink guns, it’s not particularly intricate or engaging. In fact, after you’ve finished a stage, it’s all but forgettable.

There are five worlds to fight through, each of which have five or six smaller sub-worlds that form Splatoon’s levels. On each stage, your task is the same: get from one end to the other. Three deaths will see you spiralling back out to the hub world, although getting to a checkpoint will restore one life.

For all of Splatoon’s excellence, there’s no real thrill in its platforming, no danger in its exploration or interaction with the various goons who stand in your way. The ink’s glorious interlinked capabilities (and carefully-considered drawbacks) would have made for the basis of a fantastic time-attack game: one where you had to hedge your momentum against the frequently-precipitous drops found in the levels. As it is, it’s too easy to simply shuffle from one platform to the next, playing cautiously in a world which should encourage risk.

Your enemies, too, don’t pick up the slack. Nicely designed, varied in offensive strategy (suicide bomber, sniper, airstriker) they’re also rarely dangerous. They neither possess the offensive capabilities to pose a threat – few kill in one hit, and most are easily dispatched with even the default weapon – or the intelligence to box players in and make them make a mistake with the ink or a ledge. There’s a sense of wonder to the stages: abstract worlds comprised of gigantic floating structures, cannons to be shot out of, walls to be splatted and navigated, giant rotating arms to be clung to while you desperately try and ink a hard-to-reach ledge.

But the campaign never manages to fully marry its wonderful core concept with compelling stage design. Instead of having to chain your abilities together to overcome obstacles, or having each platform linked in a way that encourages speed, risk, and daring, more often than not you’ll be simply spraying a wall and shooting up the side of it, before hitting one of the many checkpoints or being moved, safely, to the next area. Boss fights are a highlight, seeing players taking on gigantic, dangerous foes who need to be both inked and then scaled themselves to beat, and there’s a feeling the whole game should have been like that. For a title with such imagination on show elsewhere, it’s a disappointment. It tires, quickly.

Multiplayer does too, but not for the same reasons. If the single-player game is a flawed platformer, then the online is a more akin to running around with a Super Soaker in the summer holidays as a kid, drenching people while trying not to get hit yourself. It’s here where Splatoon feels more like a shooter, but it’s still not anything approaching Call of Duty. Rather than focusing purely on killing other squids, instead you’ll be playing Turf War, a 4-on-4 mode where inking as much of the battlefield as possible is the key to victory, not kills. The team with the most coverage at the end of the round wins.

It’s a cute setup, and one that is initially a lot of fun. Here, those core mechanics so underserved by the campaign are brought to the fore. You’ll be constantly spraying ink, diving into it to reload and using squid form to charge up longer jumps into enemy territory: a freedom of movement so obviously missing from the single-player. Rather than having creativity choked off by level design, in these arenas you’re free to do as you please with the ink, and nice touches like the GamePad screen showing you team paint coverage and enabling you to boost jump to your allies positions are intelligent, appreciated. A multiplayer shooter where killing is secondary, where missed shots are worth more than headshots. Only Nintendo.

Again, however, soon this tires, mainly due to the predominance of Turf War as the main playable mode in the early stages. It’s a curious move, and a poor one. It simply doesn’t have the staying power to keep people playing, especially considering how much of a (comparative) grind it is to get to level 10 and unlock other modes. Frustrating, too, is that unless the maximum number of players is met, the lobby drops and starts again. A problem potentially mitigated just after release, but what about after that? Also worrying is the amount of content slated for months after launch which really should have been in the main game, such as 4-player teams. It really should be in from the get-go.

We’ll have to wait until launch to see how it performs out in the world, but so far Splatoon is by turns brilliant and frustrating, a Nintendo classic and a missed opportunity.

By turns brilliant and frustrating, a Nintendo classic and a missed opportunity.
7 Ink system is superbly crafted Multiplayer is initially a lot of fun Platforming soon loses its edge Online action can become a grind, and isn't as feature complete as it should be