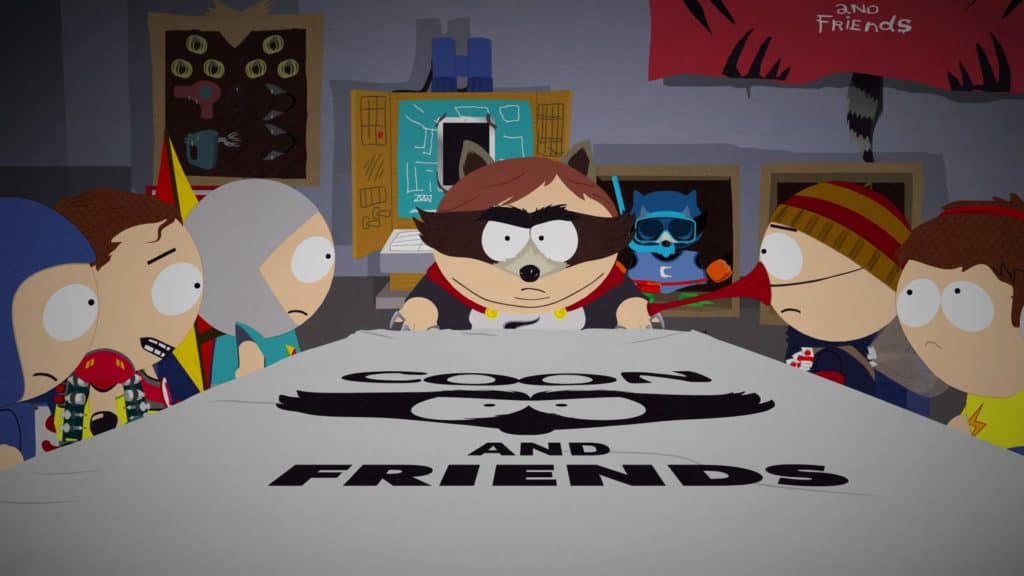 The effect of a well-written joke diminishes each time you hear it. It’s only natural, really, that the more you hear the side-splitting catchphrase, the less you laugh. To keep the chortles coming, the comedian has to be a gag machine busting out hilarity at a constant pace, and that’s a difficult thing to do in a lengthy, open-world RPG with turn-based combat. There are some clever lines in here that land quite well, but in contrast with the first game in the series, The Stick of Truth, South Park: The Fractured But Whole’s greatest strength is in how it plays rather than how it tells its tale.

The children of South Park are no longer interested in fantasy, and have instead turned their attention to making a quick buck off the popularity of superheroes. While mapping out the franchise’s movie and Netflix series release schedule, a split happens in Avengers-like Coon and Friends (led by perennial antagonist Eric Cartman) after multiple arguments, resulting in the formation of rival crime-fighting ensemble Freedom Pals. Undeterred, Coon and Friends, along with you as The New Kid, go about getting your million dollar idea off the ground by retrieving a lost cat you’ve seen on posters for a cash reward. Obviously enough, you’re soon wrapped up in a matter involving some of the town’s crime elite, because that’s how things have worked in South Park since the show first aired.

It’s joyful to explore the world that was imagined up by creators Matt Stone and Trey Parker two decades prior: strolling around the environment, engaging in combat, and chatting to NPCs in the order you want feels like you’re the director of your own 22 minute episode. It’s a fan’s dream to go for a leisurely walk and see the map come together; figuring out where each landmark is in relation to the other is just cool — there’s no other word for it. There’s reason for you to spend some time in the snow-capped community if you’d like, too, with a myriad of side quests and collectables scattered about the place. If you’re a curious soul, you’ll likely be one step ahead of the game at times, and pick up some mission items before you’ve even started the mission in question. On top of all that, you can build up your Coonstagram (Instagram, basically) followers by taking selfies with willing members of the public. If you want to procrastinate, you can.

While rummaging around the bedrooms of townsfolk like one of those inquisitive Come Dine With Me contestants is enjoyable, the laughs in the main questline dwindle due to repetitive wisecracks, and a script that just isn’t as strong as The Stick of Truth. There’s some clever commentary on aspects of modern day life that are chuckle-worthy, and Cartman still provides some giggles after all this time, but the reliance on certain gags and specific personalities (that I won’t spoil here) is trying over a long period of time. Sadly, the story feels a bit muddled, losing itself in the middle, and outstaying its welcome by its conclusion.

Moreso than its predecessor, South Park: The Fractured But Whole is a game that allows you to truly craft your vision of The New Kid. Your attire, sexuality, ethnicity, gender, and religious preference are all customisable, and if at any point you want to change any of these, you can: there are no restrictions or exclusions in this entry in the series, and it’s all the better because of it. This is an RPG in every sense of the word, including in combat. You can choose character classes that best suit your ability to either be the one on the frontline doling out punishment, or the one acting as support to your allies.

When you’ve built up your party, you can go into most turn-based battles with three buddies by your side, each of whom have three abilities and one Ultimate that can be used when the relevant meter is full. Combat takes place on closed grids of varying sizes, allowing you to move from the background to foreground in order to suit the situation at hand — maybe you’re eager to get out of the way of an impending ninja attack, so you move to the foreground; or perhaps you want to mosey on over to the middle to whack a crab person. Abilities impact different areas of the grid denoted by a little diagram on-screen, and some also have status effects like causing your enemy to bleed, freeze, burn, and so on. You also have a number of potions at your disposal, as well as Summons, which see you call upon another character to either heal your party or damage your adversaries. Oh, and you can use farts to cause your foes to lose a turn, pause time, or even clone yourself, because of course you can.

It doesn’t pose much of a challenge as you increase your Might via acquired Artifacts, bumping up your attributes to become a God-like character in the process, but it is an awful lot of fun. It’s not flawless, however, as battles feel longer than they should. A simple fast-forward function when your enemy is taking their turn, or when you’ve initiated an Ultimate, would’ve been great. It’s fun seeing each character’s Ultimate for the first time, but when they’re as long as some of them are, they slow everything down to a snail’s pace. Overall, it’s an improvement over the original’s system in almost every conceivable way, though.

The effect of its punchlines decline over the course of the game — there’s only so many times you can see a hamster being shoved up someone’s ass — and the general quality of South Park: The Fractured But Whole’s story yo-yos a lot. But there’s more than enough for fans to consume, and buddying up with the likes of Mosquito, Human Kite and Super Craig for a fight is great fun, if a bit easy.

Available on: PS4 (reviewed on), PC, Xbox One

The longer South Park: The Fractured But Whole went on, the less I laughed. Exploring the mountain town, however, is a delight, and the battles are a marked improvement on the original's combat.
7 Combat is good fun, if a bit easy Bringing the cartoon to life by walking around the town is a joy The story goes on too long and becomes less funny over time