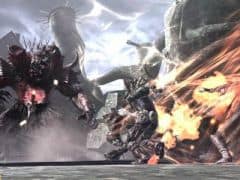 I feel sorry for Vita owners. I had one for six months and the poor thing gathered a mountain of dust before I sacked it off. There’s still no essential title available for it, and absolutely sod all on the horizon. (Yes, I know about Gravity Rush and the port of Persona 4, but neither are honestly worth shelling out the money for Sony’s troubled handheld.)

This probably explains the buzz around Soul Sacrifice, the latest offering from Mega Man creator Keiji Inafune, with people latching on to what appears to be one of only a few highlights in a release schedule so dry it is less of a ‘dry patch’ and more ‘Sony’s Breathtaking World of Sand’. Maybe this explains why, for what appears to be from all description to be a pretty niche title is getting some nice hype and some bizarre comparisons to Dark Souls. It is nothing like Dark Souls.

Anyway, Soul Sacrifice is a rad little title. It’s one of those post-Monster Hunter Sony handheld action games where its core is broken down into bite-sized missions accessible from a central hub and character progression as well as new gear is the overall goal. The ultimate prize in Soul Sacrifice, though, is gaining magical abilities. Find the more powerful ones on offer and the better your chance of besting harder monsters, which will net you better rewards, will be. Rinse, repeat. As Monster Hunter has proved, it is an incredibly addictive (and successful) formula.

So, the setup. The world is ending at the hands of some hard-ass sorcerer called Magusar, and you play a nameless prisoner just waiting for their execution. The visuals are relentlessly grim – the world is piled high with brown and crimson, rotting bodies and bones. Like Sunderland.

This is where it gets pretty wild. You find a talking book among the rubble, called Librom. Inside his pages are the diary entries of an unknown sorcerer who is connected with Magusar, and by re-living his memoirs one by one you can learn his abilities and break out of your cell and fight him.

Each written memory is its own little mission, which will eventually lead to beating a group of enemies or a single bigger ‘Archfiend’ boss. Killing these gets you different spells and powers that you can equip and use in the missions – six at once. A lot of them are radically different, offering attack and defence options, so picking your ‘loadout’ based on what you’re expected to kill is essential for high-end play. By picking up multiples of the same ability you can stack them for a power boost, and combine them to make new, much more powerful ones.

The main theme behind the game is – drum roll – sacrifice. With every enemy you dispatch you’ll have the opportunity to spare or save them, with the former netting you health and defence bonuses while the latter will get get you more magic power. There’s the big special attacks that kill absolutely everything – known as the Black Rites – and cripple you with status effects after you use them. Then there is death itself. You can request to be raised again, accept your death, or be sacrificed. This allows you to run around as an invisible ghost, dumping different status effects on enemies, NPCs or, in multiplayer, your team mates.

The presentation of the game is also top tier. The menu screen is the bony cage in which the protagonist is trapped with Librom, viewed from first person. You can move the Vita around and view the carnage that surrounds you. The story is told through the diary pages, which are narrated by the mysterious author, and drip feeds you the plot as it builds to its (fairly obvious) conclusion. The music is all gothic bombast and melancholy vocal parts. Inside Librom, the flavour text for the lore items and enemy profiles are brilliant – some of them are isolated little tales, a bit like those short stories in Lost Odyssey, if they were written by Clive Barker. When he was 16. You can even find cryptic clues as to what certain enemies weaknesses are by giving these a good read. Sometimes it’s the smaller details.

It’s these trinkets that make Soul Sacrifice such an enjoyable game. I love the fact that from the main menu, of sorts, you have the ability to do all the usual gubbins, such as checking the options, reading Librom and continuing the game as well as some truly unique choices like, at any time, having a pop at Magusar. That option alone – which exists from the word go is – enough for everyone to have a cheeky save of their game and try and best the final boss when woefully unprepared. I tried it after doing the first three missions. Librom gave me a warning. I ignored it. Magusar then proceeded to drop me in two hits. Now, from that point onward, in my mind, Magusar is a confirmed badass, a true challenge to overcome, and he’s waiting for you.

It is also a surprisingly daft game, too. First of all, there’s the frankly bizarre atmospheric choice that is Librom’s character. In spite of the game’s quite grim setting, Librom himself speaks in a snappy English accent. He cracks jokes at your expense, is a sarcastic little sod and patronizes the player when he is discussing crucial plot points. It’s a bit like a fart at a funeral when put against the rest of atmosphere. Basically he is brilliant. Then there’s just plain weird stuff like the currency used in the game: a milky fluid that secretes from Librom’s eye. Really. You have to clean it off using the touchscreen and everything. As the former manager of a GameStation and the things I’ve seen on some memory cards, wiping similar stuff off of PSP screens seems to be common practice among owners…

Unlike a lot of similar games, where multiplayer is the primary part of the gameplay, the multiplayer here feels quite secondary to the strong single player campaign. You team up locally or online with four other players and take on some unique missions to get new magic abilities. You can swap Souls via Near app functionality if you pass another Vita owner, but seeing as I live in Central London and still only get 3DS Streetpass hits once in a blue moon this is pretty optimistic thinking by Capcom. Other people! With Vitas!

And that sort of highlights my worries for Soul Sacrifice. There’s a good experience to be had but it’s hard to shake the fact that this is a bit of a niche title. If you can let the deep magic system and customisation of your attack and defence setup get its hooks into you, in the same way that Monster Hunter’s relentless quest for a new hammer can, then this is an absolute winner. I’d love to see it do well, but it definitely isn’t the killer app Sony could use right now. It’s sort of like an engineer boarding the Titanic. Good, useful, definitely worth having, but man, the ship is still sinking.

Played for around 8/9 hours, mainly on the main campaign as well as a handful of multiplayer matches with a couple of absolutely useless players.