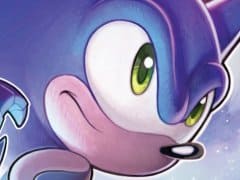 Baldur’s Gate, Neverwinter Nights, Star Wars: Knights of the Old Republic, Jade Empire, Mass Effect and now… Sonic Chronicles? Hold up one second. Canadian RPG gods BioWare have made some of the best RPGs ever. They’ve also got a reputation for making hardcore RPGs. Which makes SEGA’s decision to get the studio on board to make Sonic the Hedgehog’s first ever role-playing game rather surprising.

But a decision great for us so called core gamers, right? With BioWare on board we’re guaranteed to get the kind of hardcore Sonic RPG game true fans want. Wrong. Sonic Chronicles is an RPG, and, in a way hard to pin down, unmistakably BioWare, but it is not the epic, in-depth, 50-hour hardcore RPG some might have hoped for when the game was first announced.

Instead, it is an accessible, well presented, short, simple and easy role-playing game that’s perfectly enjoyable, and in some areas quite innovative, but won’t, ultimately, keep the hardcore happy for more than five or six hours max.

The main reason for this is the game’s linear structure. Yes you can pick from a number of lines of dialogue when you speak to the rest of your crew (loads of Sonic’s well known friends turn up as possible party members) as well as NPCs, but your conversation choices have little to no effect on what’s going on. Basically, you can decide to take that quest from the NPC or not. Or you can chat with Tails, or Amy, or Rouge, or Big the Cat, or Cream the Rabbit, or anyone else you might find fighting alongside the Blue Bomber (including some surprises we won’t spoil for you) and get an idea of their state of mind, but that’s it.

At one point Sonic is presented with what looks like an important game changing decision: side with Knuckles and head to Angel Island to stop the Marauders, a secretive group of technologically advanced beings who have stolen the Chaos Emeralds (again!), thus forcing Sonic out of his world-saving hiatus; or go with Tails’ idea and try to stop Eggman (Dr. Robotnik), who he believes is the real evil behind all the trouble. Whatever decision you pick, the game forces you to go with Tails’ idea.

You can go off and explore the game’s graphically gorgeous zones – which include classics like Green Hill Zone – at your own leisure but there’s no real reason to unless you fancy finding all of the hidden Chao Eggs and rings in the region. You can talk to NPCs and complete side quests, but again, there’s no real reason to unless you fancy filling your bulging inventory with health and PP (POW Move Points) items. And exploration itself doesn’t work quite right – you need to point on the area you want your party to move to and use each party member’s specific exploration talent (Tails can fly, Knuckles can climb up walls, Sonic can spin through pipes and loop the loops) – it’s fiddly and doesn’t feel as responsive at it perhaps could. At the end of the day, there’s not much else to do in Sonic Chronicles than follow the main story and finish the game.

Sonic Chronicles is an RPG at heart though – there’s experience, levelling and stats to pore over. And this comes through strongest in the enjoyable and well thought out combat. It’s like Final Fantasy fused with Etch A Sketch – turn based with some stylus mini-game action thrown in for good measure. First you select the party member you want to give a command to, then decide from five options: Attack, POW Moves, Defend, Items or Flee. Classic RPG stuff. Attack is a basic hit, Defend reduces damage taken and regains POW Move Points, Items allows you to use, er, items, and Flee makes all four party members run away, which is only successful after completing a Mario & Sonic at the Olympic Games style game to get to the finish line before your opponent.

It’s the POW moves which are of most interest. Whenever a party member levels up you get to spend points unlocking new POW moves or upgrading existing ones. These are the moves you’ll need to use to defeat the more powerful enemies in the game because they do the most damage, and inflict useful status effects. But they require some nifty stylus action to work.

Take Sonic’s Blue Bomber POW, for example. Here Tails chucks him into the air before he speeds down, hitting his foe twice for solid damage. To make the POW move count, however, you’ll need to follow a slowly moving circle with the stylus in a down up motion (Tails lifts Sonic into the air), then follow another slowly moving circle that moves in a left to right arc (Tails throws Sonic at the enemy), then touch two shrinking circles at just the right time (one for each hit). The idea is that the stylus input should mimic the POW move. It’s easy to grasp, requires a surprising amount of skill, especially for the more elaborate POW moves, and is good fun.

Some of the POW moves can be quite spectacular, too. One, Sonic’s Hail Storm, requires Knuckles, Tails and Amy to be in your party to work. They combine to smash a spinning Sonic at a single target, causing massive damage and potentially stunning the enemy.

While the game is overall quite easy, there is some strategy required, especially after the halfway point when some of the enemies have one hit kills. You’ll have to keep an eye on the order of turns, displayed on the top screen, so you can see what order the commands will be played out. In this way, you can ensure you’ve healed up, or buffed your party, or inflicted a status effect on your opponent before the power classes kick in with their POW moves.

And you’ll have to be on your toes at all times, too. No inputting commands then going to make a cup of tea here. Your enemies have POW moves themselves, and the only way to successfully defend against them is to use the stylus in much the same was as described above to make them miss.

The combat never really drags, despite it never posing a serious challenge. It’s too much fun for that. If you’re willing to give it a chance (and forgive the awful Sk8er Boi style combat music) it’s some of the best DS role-playing fighting out there, and, in its own way, quite innovative (the 3D animations are hugely impressive).

In fact, it’s the combat which keeps you motivated through to the end of the game, since it’s through combat that you’ll gain most of your EXP and levelling up. Since the plot isn’t the game’s strong point (is it ever with Sonic?), you’ll be most interested in gaining new party members, exploring their new POW moves and upgrading existing ones so you can cause some truly spectacular damage. The ability to bond collected Chao (which hatch in your Chao Garden) and thus buff specific characters doesn’t feel like anything other than an afterthought (you can level them up, but only by trading them wirelessly with other players), so you won’t spend much time there either.

If you’re not a Sonic fan and instead are simply looking for a quality RPG, there’s better on the DS, but Chronicles still comes highly recommended. If you’re a Sonic fan Chronicles really is an essential purchase. It’s one of the best Sonic games we’ve played in ages (given the quality of some Sonic games in recent years this doesn’t come as a surprise) and, despite it not being as in-depth an RPG as we’d hoped, it’s really a lot of fun while it lasts.

If you're a Sonic fan Chronicles really is an essential purchase.
8 Great combat Great graphics Too linear Exploration is fiddly