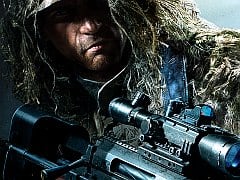 There’s a level in Sniper: Ghost Warrior 2 that perfectly sums up what a gargantuan waste of time the whole endeavour is. Well, there are loads of them – pretty much the whole game qualifies in that regard – but this particular stage seemed custom-built to show off the game’s worst qualities.

Having followed my spotter through a series of distressingly linear paths – his job supposedly to call out targets, but actually to function as a CoD-style, follow-the-man guide between shooting ranges – I finally got the chance to do some actual sniping.

Setting up my position overlooking a compound teeming with enemies, the gun clipped through the floor, making it impossible to actually see some of the targets below; just one of many, many bugs.

The mission? To cover the advance of some Special Forces guys as they raid the compound. Except I don’t really have to, as they do most of the work, and actually engaging the enemy quickly exposes the game’s shoddy AI: either they’re dumb as rocks, or have super-villain levels of perception. You may be hiding up a mountain a mile away, but they’ll still find you. And when they do, they might very well just stand there, confused, as the game wonders what to do next.

The mission continued. 15 or so dead guys later, each despatched with all the excitement of watching a beige jumper knitting competition, it ended with a hostage scenario. It should have been a moment of real tension: the game is always telling you to shoot through one enemy into another, meaning – in any logical world – that doing so here will kill the person I’m meant to save. Not so. One round through the hostage taker’s back later and the mission just ends. I can only presume that said hostage’s back was made out of the same magical material as the foliage I also couldn’t shoot through earlier.

The sniping, as you can probably tell, isn’t up to much.

As you’ve got a spotter, there’s never that fear of being unable to locate an enemy that might be targeting you, and there’s little need for tactical play. Concessions have been made to real-world sniping: distance, bullet drop, heart rate and wind need to be accounted for. On the highest difficulty, at least: on easy and medium there’s a little red circle that tells you where to actually shoot.

Even on hard though your enemies are so dumb, the shots so contrived, there’s no satisfaction to killing your foes, and there are so many of them that it becomes very tiresome, very quickly. Say what you want about Sniper Elite V2, but in Rebellion’s game there’s a very visible payoff to your actions, in the form of ridiculous gore. It knows why you play sniping games, or as snipers in FPS’s. There’s you, alone, up on Olympus, swatting down overwhelming odds, with a blood-soaked reward on offer for your cunning and skill, you maniac. There’s none of that here: they just fall over, with a little puff of PS2-era blood that appears from nowhere. It’s curiously empty, like playing FIFA if there were no nets on the goals.

Dismemberment may yet arrive, but even so it’s not going to fix the rest of the game’s problems, of which there are many. Sniper: Ghost Warrior 2 gets off to a poor start and screams downhill from there. A lot has been made of City Interactive’s decision to use CryEngine3, a point rammed home with that pompous ‘Achieved With CryEngine3’ splash screen. In fairness City has achieved something noteworthy. Somehow, it has succeeded in making Crytek’s cutting-edge tech look totally sub-par. Low-resolution textures are everywhere, (there’s more flicker than Double Dragon), and tonnes of pop in, an abysmal framerate and awful animation combine to make it one of the ugliest games I’ve played in some time.

As Crytek itself has proved on multiple occasions however graphics aren’t everything. Ghost Warrior 2’s main competition (in the genre at least), Sniper Elite, isn’t exactly what you’d call a looker either. Shame then that SGW2 is poor in almost every other regard: a buggy shambles that makes shooting people’s heads in from miles away boring, and its technical failings reinforce the poor overall design.

The game’s main problem, everything considered, is that it makes what should be a test of skill and patience into a series of shooting galleries that require little skill. Instead, it’s a woeful Call of Duty with a telescope. You’re dragged from location to location to perform the same rote steps: set up on, essentially, a firing range; kill stupid people in boring ways; listen to military jargon and some guff about dirty bombs that you’ll forget instantly; rinse and repeat.

Things improve slightly in multiplayer, which benefits from playing against human opponents. But then, seeing as it’s easier to run and gun with the pistol and there are only two maps, it’s not much of an improvement. Want sniping done right? Buy Sniper Elite V2. Or CoD 4, for that matter.

Played through the campaign on Normal in 5 hours, as well as several games of multiplayer.