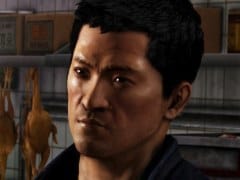 Much like the Hong Kong cinema it lovingly recreates, Sleeping Dogs adheres vehemently to genre. Instead of trying to reinvent the open-world game, United Front’s once-troubled tale sits squarely inside the city limits defined by Grand Theft Auto, happy to cultivate memorable moments on and around well worn roads.

So, as we embark on our voyage deep undercover in the Hong Kong triad, our hero Wei Shen picks up missions from spots on his radar, jacks cars when he’s stuck without a ride, flicks between radio stations in search of suitable mood music, and occasionally takes his aggression out on innocent passersby. Sleeping Dogs is generic by definition, but that isn’t a criticism. It’s a game that knows the rules, and knows that you know the rules. There’s not too much to learn. You can get straight on in there and start enjoying yourself.

And enjoyment is what Sleeping Dogs does best. Every element has been fine tuned in pursuit of outrageous fun – nothing’s complicated, nothing’s fiddly or pernickety. Think about all the things you usually have to do in these games. It’s all in here. Fighting, shooting, driving, even a bit of free running, and it’s all executed with class and flair.

During the early stages, you’re drawn into Wei’s double life. On the one hand, he’s a cop (a supercop, if you will), but in order to get in with the Sun On Yee triad, he has to go deep. While United Front has spent time and a lot of money crafting a compelling tale that sits somewhere between a Jet Li movie and Infernal Affairs, the studio hasn’t bogged itself down worrying too much about reality. So when Wei kills ten dudes in a street fight, or slows down time when he leaps over a wall, you don’t care, because it all serves the action. Is this how a cop would really behave? Of course not. Does it matter? Even less so.

Sleeping Dogs is at its best when you’re tackling one of thirty story missions, denoted by a green shield on your mini map. These operate in a duality – they’re telling the story of Wei’s conflict as he struggles with the violent reality of life in the triad, and they also blend the game’s component action-heavy parts beautifully, meaning you’re never stuck just doing one task. Even early missions blend free-running (handled gracefully with a sprint button and smoother animations if you time your jumps well) and hand-to-hand combat. And the scrapping itself is crunchy and satisfying, even if it is just a lift of Batman’s Arkham ass-kicking.

Facing up to a pack of enemies makes you feel powerful and vulnerable at the same time. You can counter any incoming attack when an enemy flashes red, and you’ll do so with guile and, often, uncompromising brutality. Yet it only takes a few hits before Wei crumples on the floor in a broken, dead heap. So you have to remain calm and aware, picking your shots and deflecting incoming blows. Isolate an enemy, and you can grab his lapel and hip-throw him into the concrete, or if you see anything in the vicinity flashing, drag him over there and deal out a magnificently violent environmental finish. They’re just funny enough to not be completely at odds with the rest of the atmosphere, but this is certainly not a game that’s shy about a bit of bloodshed.

By the time you’ve got a gun in your hands and a sports car under your backside, Sleeping Dogs revels in throwing closed fistfuls of action at you and seeing if you can keep up. The shooting focuses on speed and forward movement, with cover meant for vaulting rather than hiding behind, and flying disarms as useful as headshots. And as for the driving – well let’s just say it’s not exactly Forza. If you can hold an accelerator and turn left and right, you’re going to be alright. That’s not to say it’s not great fun to whip a snappy little import around the city streets, though. Everything in Sleeping Dogs’ missions is about speed. Although perhaps at times it’s a little too fast.

While the city is a marvel to look at, it does struggle to keep up at times. The framerate’s choppy during drives, occasionally dipping to single digits during hectic police chases, and the roads are alarmingly bare. It makes navigating in a car easier, of course, but it does damage the game’s sense of place. While it’s not the game’s intention to make you feel lost or alienated – Wei is a local – Hong Kong often feels like a video game space rather than a living city. However, the amount of work that’s gone into the NPCs is supreme – countless animations, interactions and routines. Walking the streets is far more effective than driving them. It’s just not as fun.

Thankfully, Sleeping Dogs isn’t a game that expects you to spend too much time just milling about. The story, while hampered with editing problems and inconsistent in its dialogue, is still a cracking yarn of deceit, betrayal and internal turmoil. The cutscenes have a real cinematic flair and the performances are excellent.

There’s plenty of other stuff to do in Hong Kong too. Random events, mini-missions, races and underground fight clubs are joined by drug busts (take out a gang, hack the nearby camera and pop home to catch them in the act), martial arts training and even karaoke. There’s a cell phone that lets you call people to go on dates (although thankfully no one’s pestering you asking to play darts every five minutes) and take snaps. And there’s an entire sub plot where you work with Detective Teng on murder cases. They’re even less interactive than LA Noire, but great fun nonetheless. And most of the time you end up in some big fight for no reason. No shame there.

Sleeping Dogs may not offer anything particularly new and certainly nothing groundbreaking, but what it does do is deliver sharp, thrilling and just downright enjoyable action to savour. Other open-worlders have tried to veer from Rockstar’s path, some have even tried to lampoon it, but Sleeping Dogs has shown, confidently and emphatically, that you don’t always need to change the rules. You just have to know how to play.

As a package this is as feature-complete as you could want, but it's a long way from the version it could have been.
6 Fog looks nice. The game is still great fun. Frame rate isn't up to scratch. As a new-gen upgrade it's not good enough.