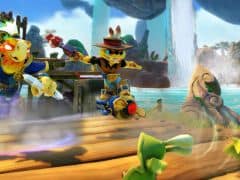 In the face of strong competition from Disney Infinity, Skylanders really needs to be on its A-game this year. Yet series creator Toys For Bob has taken a back seat, handing the keys to Vicarious Visions. No matter: Swap Force doesn’t suffer one bit for the changeover. It’s the best Skylanders game to date, and a clear step forward for the series.

Or should that be a leap? The addition of a jump button makes a big difference, allowing the developer to craft more diverse levels. And while the action is similar to previous games, the new Swap Force characters get their own individual challenges; from platforming tests to races, climbing interludes to fast-paced teleportation puzzles.

They’re part of a pretty hefty campaign: boss battles aside, its 17 chapters take place across a range of sprawling environments. These levels are long, secret-packed, and lovely to look at, with improved lighting, more detailed art and beautiful, vivid colours. There are tons of minor improvements: a larger hub is more fun to explore, while score and time attack modes encourage you to return to story levels once you’ve teased out all the collectables.

Meanwhile, the new additions to the expanding roster are characterful, well conceived and solidly built, and the top and bottom halves of the Swap Force toys connect with a satisfying snap. Being able to marry Grilla Drilla’s pounding fists with Magna Charge’s speedy wheels – to name but one of 256 possible pairings – is a neat hook, and there are separate upgrade paths for both halves to make for even more unique combinations.

Swap Force is a brilliant, imaginative game for kids of all ages. That shouldn’t be such an anomaly, but outside Nintendo no one is making games for a younger audience that are as polished, as thoughtful and as substantial as this. It’s a genuine delight.

A brilliant, imaginative game for kids of all ages
9 It’s enormous: will keep you busy for months. New figures are excellent. Extremely polished and attractive. Phoning your bank to extend your overdraft.