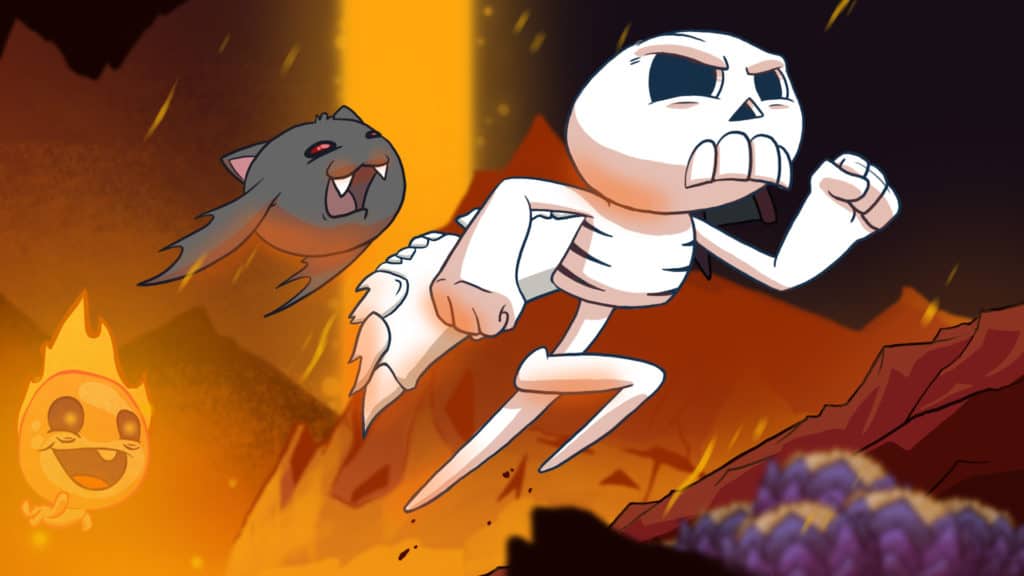 In Skelattack, you play as a skeleton who wields a sword. Your best friend is a bat, and together you must save Aftervale—a cheerful parish whose boney residents bustle along as though purgatory is the place to be. And it is. There’s a blacksmith, an alchemist, a local pub, filled with warm chatter, and even a library (Borges would be in heaven). But before I was introduced to these merry souls and given a chance to get busy dying, I glimpsed a quieting sight—a lone, lost ghost, not as bright but clinging, nonetheless, to life. It flashed by silently, a single word against a blood-red background: “Konami.”

The chances are that, unless your religion is football and your annual church subscription takes the form of Pro Evolution Soccer—or eFootball PES 2020, to give it its ghastly new title—Konami seems a fading presence of late. Here the Japanese giant isn’t on development duty. (If it were, Aftervale might have manifested as a castle, clustered with upward-dripping spires; or, at the very least, its hills would be silent.) It’s co-publishing the game, along with Ukuza, the small studio that made it; and if you sense the modest, purpose-fuelled feel of a debut, that’s because it is. The prospect of a dungeon-dwelling 2D platformer may well inspire little more than a dry sigh, nowadays. As genres go, it’s as carious as they come, but Skelattack has a winsome twist: you are the rattling remains of the dead, the dungeon is your home, and the humans are not heroes but marauders, seeking to plunder a power source. The title is slightly misleading, then, but something about Skelrepel doesn’t have the same punch. 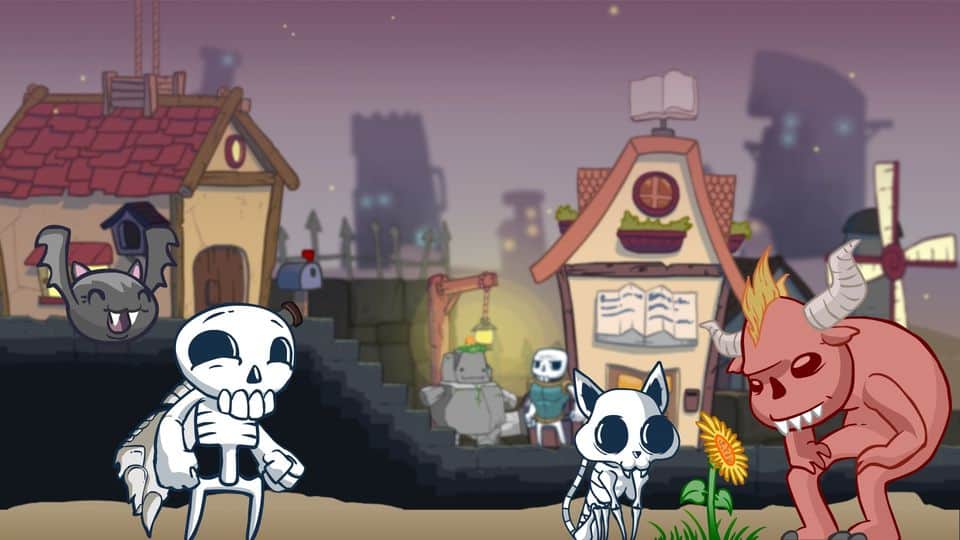 As Skully, accompanied by your round, flapping friend Imber (whom one character refers to as a “goth baseball”), you make your way from Aftervale to the various realms that require your assistance. These come in all the classic platforming flavours of lava, jungle, sewer, castle, and crypt, and demand a light touch. There are jumps (of the double and triple varieties), slides, and wall leaps—as well as portions where you play as Imber, winging through narrow passages. Skelattack takes its twitchy influence from the likes of Super Meat Boy and Hollow Knight; which is to say that some sections pose a threat to your controller, windows, and mental fortitude. The pace of play often verges on the frantic, prodded onwards by plentiful checkpoints and instant retries. The payoff for completing a tough segment, aside from the satisfied rush, is usually a new power—sonar, for instance, reveals traps and hidden treasure, while the Boom-a-rib allows Skully to pluck and weaponise one of his own bones.

The combat consists of roughly aligned sword-flails and floaty evasive hops; it only thickens into a challenge for the bosses, and doesn’t hold your attention for long. As with the rest of the game, outside of the more focussed platform sequences, I was boosted through by the breezy mood more than anything else. Skelattack is a masterpiece in the art of the pleasant. Your quest is broken up by trips back to Aftervale (courtesy of a mine cart and a fast-travel tunnel network), where you can buff your sword at the blacksmith, purchase upgrades to your powers (I recommend extra Boom-a-rib range), and check out the pages of lore, which you find hidden out in the world. 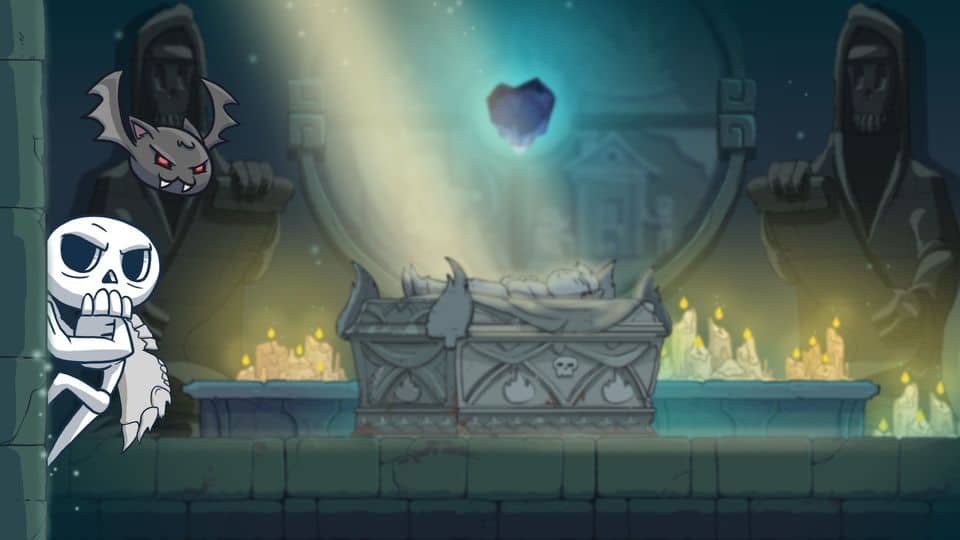 The story is knowingly slight, more a handy vehicle for poking fun at the paper-thin plots that beset so many of the classics, from Mario to Metroid. In response to hearing of the villains’ plan—one I can’t, in all honesty, recall—Imber remarks, “Nah, I’m super not okay with that.” Enough said. I found myself motivated not by the narrative but by the childish urge, as when flicking through a picture book, to see what colourfully pops up next. The characters are drawn with levity. Check out the plump, rocky golem with the squiggly crack of a smile, or the rat king, slumped on his throne in a chamber of amassed cheese. The art director is David Stanley, who made his bones producing artwork for mobile games, and the world of Skelattack—cartoon-coloured and quivering—seems to have spilled from the pages of a dozen notepads.

Unlike most concept artists—whose dreamy toil is done in tandem with 3D modelers and designers—Stanley also has a hand in the game’s programming, animation, and design. And there is, despite the bounce and life of the visuals, the sense that everything has sprung from scribble to screen through a pipeline of unchecked passion. It was only after finishing the game that I thought, Hang on, if it was supposed to be a mortal afterlife, then why was it next door to a forest brimming with jolly fungi? And where does the society of sentient rocks fit in? The answer, perhaps, is buried in the rustling bowels of the library; but, visually at least, the world, while warmly appealing in slices, doesn’t cohere. It’s as if Stanley, running on the steam of his imagination, sketches as one might scratch an itch—a familiar feeling to any creative person—with no one to be super not okay with any of it. 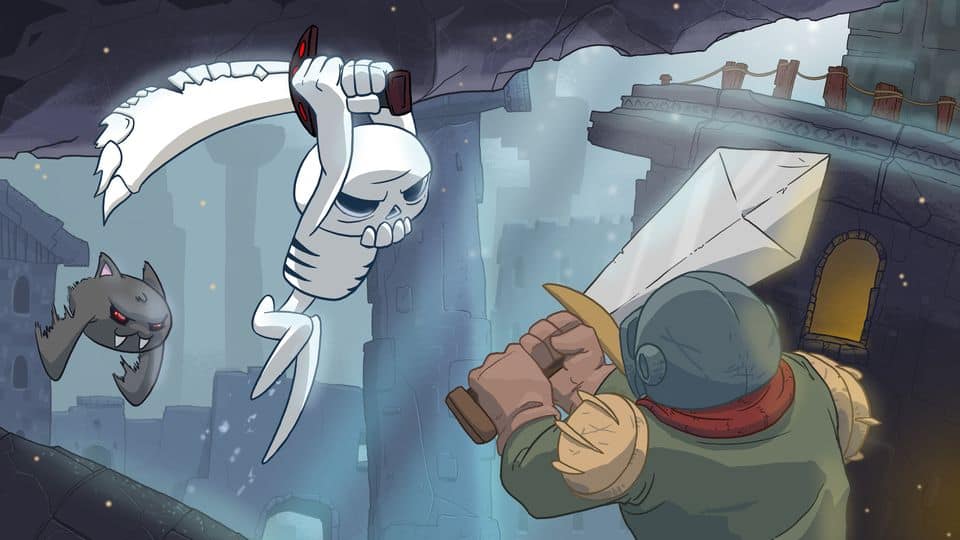 Fortunately, Skelattack is marshalled, in both mood and theme, by its soundtrack, which is composed by Jamal Green. Green’s talents are not only a match for Stanley’s, but his score binds the fragmented feel of the world, with bursts of jazzy piano and xylophone. When one piece flows into the next with this much precision and pep, it’s impossible not to be swept up. No wonder it was only when I stopped playing, amidst the clarity of quiet, that I realised things weren’t hanging together. The glue of Green’s music had sealed me inside—the perfect swinging limbo.

Available on: PlayStation 4 [reviewed on], Xbox One, Switch, PC

As with the rest of the game, outside of the more focussed platform sequences, I was boosted through by the breezy mood more than anything else. Skelattack is a masterpiece in the art of the pleasant.
7 Art Platforming Music Cohesion Combat 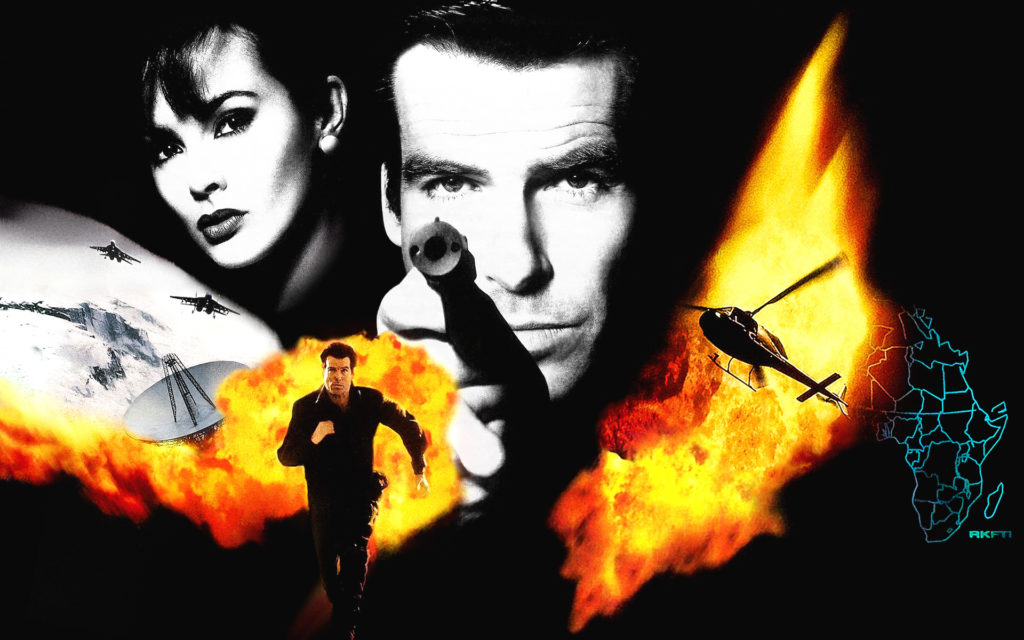 Skelattack is an indie platformer game where you are Skully, an enchanted…

Skelattack is an indie platformer game where you are Skully, an enchanted…