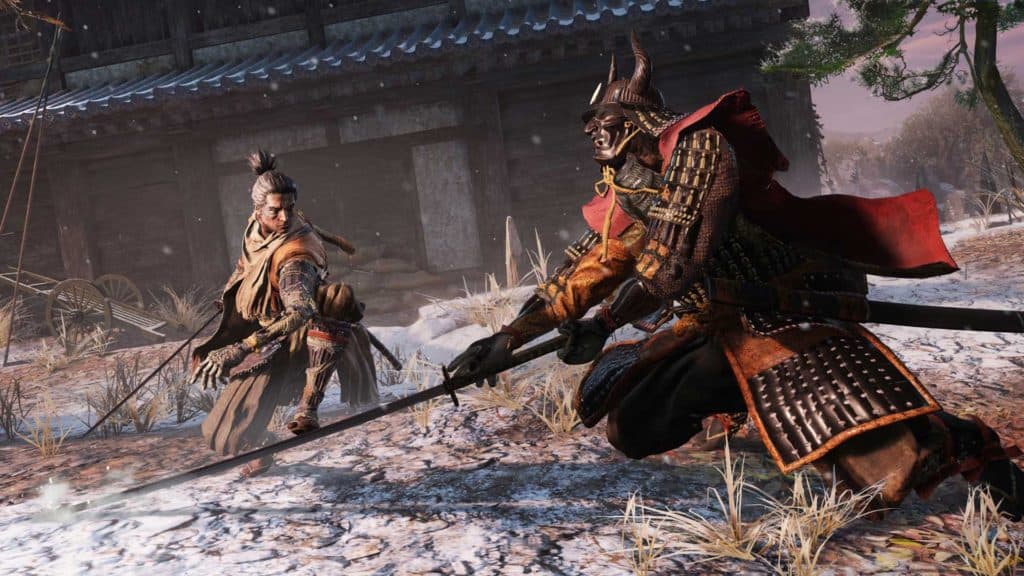 The new game from developer FromSoftware is called Sekiro: Shadows Die Twice. That subtitle might carry the clunky sound of a scrapped Bond movie, but it’s rooted purely in the mechanical: when you die in Sekiro, you can resurrect yourself. Better still, you can wait. As your corpse begins to cool and your enemies grow comfortable again, you remain languid and lethal, like a cobra – coiled and ready to strike. The last time I felt such an ingenious pleasure was in Metal Gear Solid 3: Snake Eater, in which the fake death pill induced a deep coma, making a final hiding place of its hero’s body. Only, when he awakened, he wasn’t as bent on bloodshed.

Sekiro is set in the Sengoku period – that fraught time in Japan’s history, ranging from the mid-15th century to the tail end of the 16th, in which the land was riven, and ravaged by war. It’s far back enough into the past that memory blurs and shifts into myth, and it’s become something of a Sengo-to, so to speak, for any game looking to mingle history and fantasy. From Onimusha to Nioh, Team Ninja’s take on FromSoftware’s template; through to Tenchu, which has spiritual ties – and similar teeth – to Sekiro; and even sober strategy games like Shogun: Total War, none could resist the lure of the mystical.

So it is with Sekiro, which thinks nothing of pitting you against a platoon of mortal men one moment, before tossing a snake the size of a subway train at you the next. You play as Wolf, a lone warrior who might just be resourceful enough to weather such an outlandish storm. As a child, he was adopted on a burning battlefield, trained in the ways of the shinobi, and sworn to protect his master – young Lord Kuro, the latest in a long line of children whose blood is imbued with the power to cheat death. As you can imagine, such power is coveted, and when Kuro is kidnapped, it falls to Wolf to bring him back. 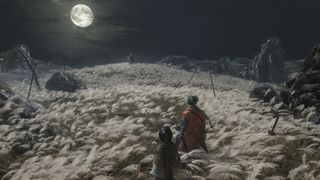 The early hours are spent getting your bearings. First, there is Ashina and its surrounding regions, where the bulk of the game unfurls. It’s scattered with sculpted idols that, when lighted, allow Wolf to lick his wounds – filling his flask with healing water and refreshing his health. They also activate fast travel points, and gradually you feel the place etching itself on your mind, like the ridges in a relief map. Second, you have to figure out how to fight – which, if you’ve played the game’s predecessors, Dark Souls and Bloodborne, means working out where you are in the world of FromSoftware. (The answer is: somewhere between the two.)

Your primary weapon is a sword, and most you fight come bearing a blade of some sort. Sekiro demands a kind of formal discipline that might border on the quaint, if it didn’t launch such an assault on the nervous system. Alongside the health meter, there is a posture bar; when you fill your foe’s posture bar – by battering away at their guard and executing perfect parries – you break their composure and open them up to a Shinobi Deathblow, which, as you can imagine, involves not the polite taking of afternoon tea but the polite spraying of blood into the air.

Like no other game before it, Sekiro revels in the ritual of swordplay – and it is ritualistic. The weapons are ornate and exquisite; when they clash, they produce firework flashes; and the fights – all a matter of posture and footwork – have the timbre of a dance. And I’m convinced (though I’m unwilling to put this to the test) that you would have an equally intense experience if you closed your eyes, such is the clangour that rings from each bout. For those weaned on the game’s forebears, it has the blistering speed of Bloodborne, but it’s cross-grained with Dark Souls’ weighty emphasis on defence.

All of which means Sekiro is ironically suited to those unfamiliar with FromSoftware’s back catalogue. Time and again I leant back on dodging and forgot to parry; other times, I gathered myself behind a stolid block, taking massive posture damage. Old habits die hard, and more than twice. At some indefinable point, it comes to you. When it does, you realise two things: one, that FromSoftware has forged something fresh from its own formula; and two, that while other developers hasten behind, imitating the symptoms of its impact, the studio stands alone.

Though, this much is clear – by my count – about two minutes in, when you see the world. It wouldn’t matter how much you paid, begged, or threatened him; Hidetaka Miyazaki is incapable of making an unbeautiful game. He and his team understand that beauty without meaning is merely prettiness. The region of Ashina, for instance, is a wonder – a wintry province of pagodas and mountains, glittering with frosted rock and framed by a pale pink sky. It’s looks fit for a fairytale. But look a little closer and you see that it’s earthed in mud and blood. Ashina is rotting. A deep, spiritual damp – called Dragonrot – that arises as a consequence of your abusing death (all that life you’re imbibing has to come from somewhere).

It’s this that transfixes Miyazaki: the tragic sloping of the beautiful into decay. Moreover, there is the suggestion that this is a mould – sparked and stoked by violence – that’s inherent in us. At one point, you happen upon two soldiers talking. ‘We’re really planning to use that thing… in the battle?’ the first asks. His comrade replies, ‘I know, I know. But what choice do we have?’ You soon find out what weighs on them so: a captured bull, its head and horns yoked to a log that’s bound in straw and set ablaze; the creature is transformed into something foul by nothing other than the foulness of men. 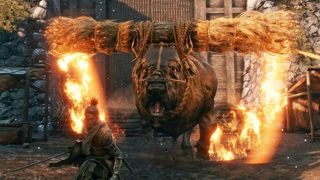 And what are we to do with such a rebuke to violence? Exactly as the advertising campaign instructs us: ‘Kill Ingeniously.’ And there are so many delirious ways to deal death. Early on, Wolf has his arm lopped off. A wizened craftsman lends him a helping hand in the form of the Shinobi Prosthetic. It’s a multifarious contraption, capable (amongst other things) of firing shuriken, whipping you to and fro with a grapple hook, belching fire, and unleashing – with a pleasing clack – a concealed spear. And like no other FromSoftware game, Sekiro has stealth mechanics – of a satisfying, line-of-sight breed – which gives Wolf, true to his name, the feel of a prowling predator. (Together with the gadgets, you feel like a bloodthirsty Batman.)

You feel a softer, sadder kind of unease than you did in Hotline Miami, which made a loud, noisome show of its questioning. Sekiro sets in insidiously – a mouldering moral creep. It couldn’t achieve that subtlety without a narrative that drives on despite the player. Hence the more concrete plotting than FromSoftware’s previous games, replete with cutscenes and dialogue spoken by its hero. Not that Wolf is particularly knowable. A streak of his face and hair is the colour of ash, as if it might crumble; he brings to mind Tatsuya Nakadai in Kurosawa’s Ran – another man falling into decay, whose greying face was caked in Noh-style makeup. One character calls Wolf ‘a most unkind and inauspicious man,’ the truth of which is left to you to ponder.

Along with much else. The way that the studio builds worlds is not dissimilar to the ferocity of its fighting – blindsiding you with a visual assault before raising its guard to scrutiny, forcing you to wonder. Is this Miyazaki’s most enchanting world? You could argue that falling back on the natural beauty of Japan is cheating; then again, the landscape lends itself particularly well to Sekiro – the plated sweep of a temple roof that starts to resemble armour, and the canes of a bamboo forest, rattling like raised spears. No other developer makes places that feel like this, and you realise what FromSoftware must be to other studios around the world: a shadow that keeps coming back.

Available on: PS4 [reviewed on], Xbox One, PC

Sekiro: Shadows Die Twice is the work of a studio at the height of its powers – beautiful, cruel, and moving.
10 A beautiful enigmatic world Blistering, punishing combat A wealth of ways to kill creatively Stirring themes and images