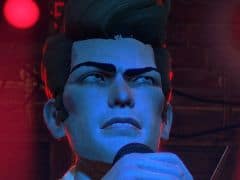 If Rock Band 4 was an actual album, perhaps by a real rock band, it would be like one of those deluxe reissues (the ones which are mastered a little better and have a few extra tracks) which collectors and fans go mad over, while everyone else who already owns it or has had their fill shrugs and goes ‘Oh, that again?’ There’s no denying Rock Band 4 is good: in places, it’s great. But it’s Rock Band.

This is both a good and a bad thing. You’ll be right at home within seconds of switching it on, a tiny portable time machine back to 2007-10, when rhythm action was at its zenith and Harmonix’s series was leading the charge. Play a few tracks, however, and as enjoyable as it all patently still is there’s the creeping feeling you’ve seen most of what it has (had) to offer. Worse: five years removed from the last instalment you may look back at the whole thing and chuckle ruefully that you spent all this cash on plastic instruments.

Speaking of which: while the quality of the gear has improved over time, the guitar itself is still lacking, which isn’t really what you want to hear about the game’s primary instrument. The strum bar isn’t as spongy as before, which is a great relief, but still lacks the satisfying, definite click of the Guitar Hero offerings. The fret buttons also don’t feel as good as those of its rival, still seeming not to travel as much. More troubling is the placement of the Share button, which is directly underneath the whammy bar, with no lip to stop you striking it accidentally. It’s a huge oversight, with players pushing more hate-inducing buttons per game than Diego Costa. At least the drum kit is nice and sturdy, even if it is still far too loud.

Gameplay-wise, the only real new inclusion of note is freestyle guitar, which in fairness is a superb addition. Think of it as drum fills for lead guitar players and you’re nearly there. Freestyle mode can be turned on or off, and when enabled it replaces the solos of the songs with a neat improvisation system. At first it seems like gibberish: a series of strange lines and curved pathways which bear little resemblance to the flowing notes that you’re used to.

A quick dip into the tutorial sorts this all out, and once done it’s remarkably intuitive. Just hitting frets in these sections will create a fairly pleasant – if not exactly coherent – noise, but once you know what each of those previously alien charts means you can put together some interesting and surprisingly tuneful solos. There are sections dedicated to just going wild on the high notes (the smaller frets at the bottom of the guitar), while others ask you to strum consistently with the beat while you freestyle, or playing notes within specific ranges. Putting them all together is a great feeling, and there finally feels like there’s a use for those additional frets buttons: jumping between the two is as satisfying as it gets in Rock Band.

Elsewhere, it’s business as usual, bar a few tweaks to drumming and singing, allowing for dynamic ranges and pitch adjustment above and beyond ‘sing like this or fail’. Get a group together and this is Rock Band as it always was: a great party game, and one which at its best contains the power to fulfil more fantasy than a thousand Man Kills Stuff titles.

If you’re a one-man band things are slightly less exciting, even with the new campaign mode to plough through. Forming a band and hitting the road, players are asked to decide between commerce and art, cash and fans. With each step on the path to superstardom, band members must decide whether to play corporate gigs (which pay more and gift new clothing, etc, to the group) or instead rock out at a collection of dives, which increase your fan base. A slight wrinkle is added by control of setlists and song choices being different for each show type: with fan-centric gigs you get free reign, whereas the corporate dollar means you only get to vote on what you’d like to play from sometimes-vague lists (‘A song from 1980’ is one of the options, rather than the song name itself). The mode is written well and is funny and engaging as you chart the rise of your band, but it tires quickly, and once you’re about halfway through there’s the feeling you’re not really working towards much.

Which, really, encompasses the Rock Band 4 experience. It feels less like a vital new instalment (how could it?) even with 60 or so songs on the tracklist, and more like a passport which enables you to port your existing Rock Band song library over from last-gen. For every Elvis there’s a Fall Out Boy or Mumford & Sons, and the setlist is varied if not particularly top-tier. If the base experience feels like the old phenomenon of the collector-focused reissue then, the whole enterprise is actually more about being like a modern music service: pay for the platform, and get all your music on it from there.

Which is a smart move, and pretty much the only way of doing it. The heyday of rhythm action games is long gone, but for fans of Rock Band, those who want to transfer their old tracks to current-gen (at no cost) and enjoy it for what it is, this is a great proposition. Everyone else, however, may have moved on.

The most refined version of Rock Band yet, but not as essential as it once was.
7 Freestyle guitar solos are excellent As refined as it's ever been More a platform than an essential purchase Share button placement on the guitar is catastrophic