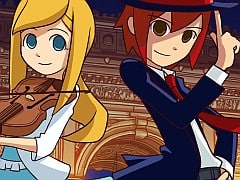 Why are developers so intent on turning hardened gamers into blubbering wimps? Whenever a developer throws down the ‘our game is so hard it will make you cry’ gauntlet the industry gives off a big masculine groan.

So when SEGA’s rhythm guru Shun Nakamura warned players his next effort would ramp up the difficulty beyond the tricky Space Channel 5 – that’s the game with the dancing TV reporter in space, kids – I assumed he was having a laugh. But after three hours of unrelenting failure on one of its gyro-operated musical jaunts, Rhythm Thief & The Emperor’s Treasure reduced me to a broken mess of a man.

Heck, it’s not even a difficult game.

Rhythm Thief’s various assortment of rhythmic challenges are a doddle, employing a mix of button prompts, touchscreen swipes and gyro motions to make a game that straddles the middle ground between Elite Beat Agents and Space Channel 5. You play as Phantom R, the moniker of Parisian teen turned smooth criminal by night, who steals the city’s priceless works of art only to return them days later. That’s a quirky premise to buy into, but it’s easy enough to be caught in the groove of this tuneful tour de force.

When you’re not strutting your stuff to crowds gathered at the Arc de Triomphe, you’ll be pulling poses to avoid security guards, learning to pour drinks as a waiter in training, and battling away the relentless Chevaliers Diabolique troupe with all the panache of a Michael Jackson music video.

Surviving each ordeal is simple enough, although managing each one with a stylish A grade attached to your name requires considerably more effort. This is made harder to accomplish thanks to a harsh scoring mechanic that will knock you back a whole grade for each hiccup, which is considerably more frustrating in the handful of wobbly gyro-controlled challenges.

Brief episodes of Layton-esque detective work flesh out time between your rhythmic exercises, having you trawl the streets of Gay Paree to chase down leads with its locals. As if aware of its own forgery, Rhythm Thief is eager to whisk you through these tired segments. A red path on your map will direct you to your next clue and I’d be pressed to call any of the puzzles in any way challenging.

Those willing to explore each street corner will find their rewards and even a few faithful reminders of SEGA’s own rhythmic history. Phantom R will encounter a female challenger with moves not unlike those of Space Channel 5’s Ulala. Elsewhere, you’ll find a game inspired by Samba de Amigo, though it’s not quite a match for the tactile feel of that game’s weighty peripherals.

Like its spiritual predecessors, Rhythm Thief’s soundtrack is a memorable assortment of jazzy melodies and cheesy J-pop sing-a-longs played harmoniously with the game’s timed prompts. Violin performances driven by Rhythm Thief’s female protagonist play out as Guitar Hero-like displays in which you draw your bow across the touchscreen.

Reinforcing the exceptional production values are the anime cutscenes and cel-shaded graphics. The vivid detail and a smooth frame rate give life to Phantom R’s antics as he pirouettes around the streets of Paris saving young women and fencing off a resurrected leader of the French revolution.

Rhythm Thief is a spellbinding journey with catchy tunes, beautiful visuals and enough rhythm set-pieces to strike a chord while we twiddle our thumbs and wait for the next Layton and Phoenix Wright games. It hits a few bum notes along the way, but this performance is worth a round of applause.

Rhythm Thief hits a few bum notes along the way, but its performance is worth a round of applause.
7 Simple but addictive rhythm challenges Superb animated cut-scenes Puzzles are too easy A little on the short side

Unearth the clues hidden behind treasures scattered around Paris, call on your…

Unearth the clues hidden behind treasures scattered around Paris, call on your…