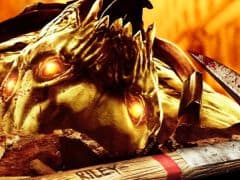 Resistance: Burning Skies is all about the guns. Big guns, little guns, guns that let you see through walls. Big guns with little guns glued on the side. There are ugly aliens, too, and they make great target practice for all those big chunky guns.

For those unfamiliar with the series’ alternate history; World War 2 never happened, Nazis never existed (yay) and an extraterrestrial race called the Chimera has invaded the Earth to murder us and take our houses (boo). After overrunning Russia, Europe and eventually trotting over to jolly England in Resistance: Fall of Man, those distinctive Chimeran eyes took to squashing America as their final objective.

That’s when Burning Skies takes place, before Resistance 2 and 3, in the middle of the chaos when alien toes touch down on United States soil. You’re Tom Riley, a firefighter out on the rounds as the Chimera show up to put a stop to normality.

It’s a very short, oddly paced campaign. There’s no initial focus or direction, and you’re left running from point to point admiring the bland scenery. But the story picks up after a freaky encounter with a bonkers scientist and the player gets a grasp of what they’re aiming to save, namely your wife and daughter, but it’s all over before it gets a chance to hit its stride. Moments that could’ve been emotional are watered down and ineffective to the narrative, serving as banal interruptions to the alien killing rather than moments you should care about.

Resistance has always thrived on its unique weaponry, and Burning Skies is no different. Even with the stick limitations on Vita, the moment-to-moment gunplay is smooth and accurate, made more so if you whack up the sensitivity slightly. Dealing with entire groups of Chimera can be difficult at first – especially if you’re used to playing something as tightly tuned as Call of Duty – but you’ll soon be pulling popping alien skulls with gratifying headshots.

Assuming cover is as simple as crouching behind an object and using the left trigger to spring up and fire, and secondary fire, grenades and melee are mapped to the touch screen – tap to tag enemies with the Bullseye rifle; drag and aim where you want to throw a grenade, that kind of thing. It’s well implemented for the most part, especially the grenade and melee buttons on the right of the screen, but more complex touch commands are too intrusive to the action, obscuring your view as you swipe left and right, often resulting in disorientation or at worst, death.

There’s also some poorly implemented multiplayer mode, which is a limited, poorly executed excuse for the back-of-the-box tick all major publishers demand. There are only 3 game modes, team deathmatch, deathmatch and survival – Burning Skies’ take on infection/zombie/tag – and only a small handful of maps, each of which shares the same bland colour palette as the campaign. The prospect of playing online with your mates is fun for a short while, but it’s not long before the novelty is all but diminished, made worse by longwinded lobby issues, frequent in-game lag and a shoddy ranking system that gives no real sense of reward for taking part.

I wish Resistance: Burning Skies had been braver and bolder. It’s the first fully-fledged FPS on the Vita, and it has all those brilliant guns, but it doesn’t strut around like Vita’s first-person saviour. It’s a reserved, almost lazy attempt, and developer Nihilistic always opts for the safe bet. The shooting is top notch, but poor pacing and bland environments ensure you never engage with what’s going on, and technical hiccups and formulaic game modes sour the multiplayer. This game proves the potential power of the genre on its device, but not the potential excellence of its own franchise.

New FPS set in the Resistance universe, set before the events of…

New FPS set in the Resistance universe, set before the events of…